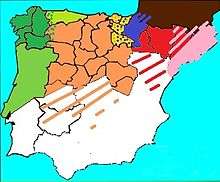 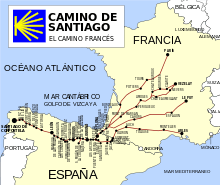 The Camino de Santiago enters in the Hispanic Christian kingdoms of the Iberian Peninsula for its Aragonese branches (Canfranc) and Navarre (Roncesvalles). From Logroño goes through the kingdoms of Castile and León, ending in Santiago de Compostela. The Cantabrian branch is diverted to pass through Oviedo, route coined one of the first tourist slogans. "Who go to Santiago and not see The Savior, visits the servant and forgets the lord".

The First Romanesque or Lombard Romanesque has especially presence in Catalonia, while the full Romanesque spread from the foundations of the Order of Cluny along the axis of Camino de Santiago. The late-romanesque continues in the 13th century, especially in rural buildings.[1]

From the 11th century the European artistic influence (especially Burgundian - Cluny - and Lombard monasteries - Lombard arches -) was superimposed on local artistic traditions ( called as "Pre-Romanesque - Visigothic art, Asturian art, Mozarabic art or Repoblación art) and Andalusi art or Hispanic Muslim) and lived with the so-called Mudéjar Romanesque (or "Romanesque of brick", dominant in some areas, such as the center of the Northern Plateau -from Sahagún to Cuéllar-, Toledo or Teruel) giving rise to an art of strong personality.

The chronology in the penetration of architectural forms is visible in a display from east to west, being the first examples in Catalonia (Sant Pere de Rodes, 1022) and developed around Camino de Santiago those of Aragon (Cathedral of Jaca, from 1054), Navarre (Leire, 1057), Castile (San Martin de Frómista, 1066) and Leon (San Isidoro -portico of 1067), ending in Galicia, where it raised the most outstanding work: the cathedral of Santiago de Compostela (begun in 1075 with the plant of pilgrimage characteristic of most of the churches of the Way, from that of St. Sernin of Toulouse). The 12th century was the culmination of the style (Monastery of Ripoll, churches of Boí and Taüll -in Catalonia-, Castle of Loarre, Monastery of San Juan de la Peña -in Aragon, Palace of the Kings of Navarre (Estella), Done Mikel eliza (Estella-Lizarra), Saint Mary of Eunate, Saint Peter of Olite -in Navarre-, Segovian arcaded churches, Santo Domingo (Soria), San Juan de Duero -in Castile-, Cathedral of Zamora, Old Cathedral of Salamanca -in Leon-). From the late 12th is identified the transition from Romanesque to Gothic (Cathedral of Tarragona, La Seu Vella (Lleida)).[2]

Few, but notable are the churches of central plant, which are often associated with models of the Holy Land brought by the military orders (Eunate in Navarre, Vera Cruz in Segovia).[3] 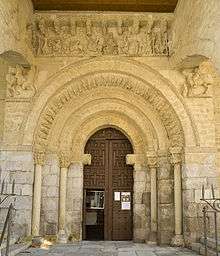 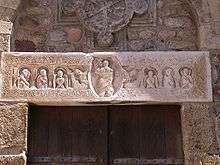 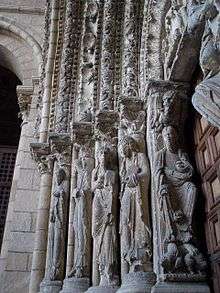 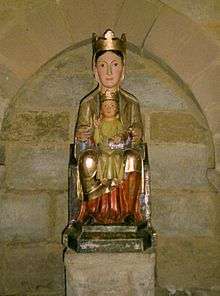 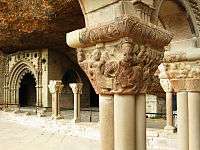 The earliest works of the Romanesque sculpture in the Hispanic-Christian peninsular kingdoms are two beam of the Roussillon area Saint-Génis-des-Fontaines (dated in 1020)[4] and Sant Andreu de Sureda (which plays its forms). Also from the 11th century are the tympanum of the Cathedral of Jaca, the gables of San Isidoro (León), the Facade of Pratarías of Cathedral of Santiago de Compostela (the Master Esteban), the cloister of Santo Domingo de Silos. In the 12th century emphasizes the facades of Santa Maria de Ripoll, of the Andre Maria erreginaren eliza (Zangoza/Sangüesa) of the San Pedro el Viejo (Huesca) and the cloister of Monastery of San Juan de la Peña. In the late 12th century belong the facades of the Church of Santa María del Camino (Carrión de los Condes) and Santo Domingo (Soria). In some works of this period is visible the transition to Gothic: the apostolate of the Cámara Santa (Oviedo), the facade of San Vicente (Ávila) and Portico of Glory of Cathedral of Santiago de Cosmpostela (of Master Mateo).[5] Another of the early sculptors of known name is Arnau Cadell (capitals of the cloister of Sant Cugat). 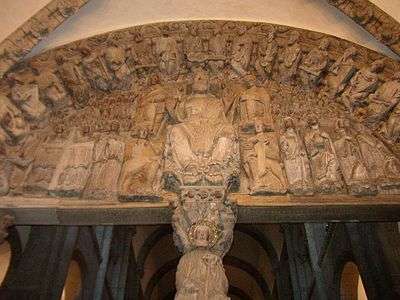 The carvings in the round bulge that have been preserved, in polychrome wood, usually have as theme the Christ crucified in the type called Majesty and the Madonna with Child in the type called sedes sapientiae ("Seat of Wisdom"). An exceptional sculpture complex is the Davallament of Sant Joan de les Abadesses, of transition to the Gothic.[6] 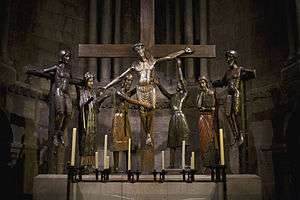 The Spanish Romanesque frescoes are outstanding: Pantheon of the Kings of San Isidoro (León) retained 'in situ', or the torn from its places of origin (San Baudelio de Berlanga, hermitage of la Vera Cruz (Maderuelo) -both in the Prado- and the collection assembled in the National Art Museum of Catalonia).[7]

The panel painting produced antependium that, especially in Catalonia collected the Italian-Byzantine influence from the 12th century (Altar frontal from La Seu d'Urgell or of The Apostles). In later period it evolves to the Gothic painting, of higher capacity narrative and lower stiffness (Altar frontal from Avià).[8]

The preparation of manuscripts in the scriptorium of monasteries and cathedrals was an out-standing activity, continuing the Mozárabe tradition (Beatus) and incorporating the European influences (Libro de los testamentos, Tumbos compostelanos, Codex Calixtinus, etc.) have been retained some outstanding examples of tissues in liturgical vestments and tapestries (Tapestry of Creation of the Cathedral of Girona) The Ivory carving, of Andalusian influence, played an important workshop at the Leonese court. The goldsmith produced rich pieces (Cáliz de las Ágatas or of Doña Urraca -ca 1063-,[9] Ark of San Isidoro), including the incorporation of the technique of the Limoges enamels (Frontal of Santo Domingo de Silos).[10]