A spelling test is an assessment of a person's (usually a student's) ability to spell words correctly. Spelling tests are usually given in school during language arts class, to see how well each student has learned the most recent spelling lesson. Typical intervals for spelling tests are one per week throughout the school year, except for spelling bees, which are generally held once per year.

One very difficult kind of spelling test is the spelling bee: a competition where contestants, usually children, are asked to spell English words. The practice originated in the United States and has since spread to elsewhere in the English-speaking world, especially North America. It is not, however, a very familiar concept in the most Commonwealth nations, where, if the term is known at all, it is usually perceived as a peculiar American tradition. Every year in the United States, there is a national spelling bee involving most primary and secondary schools in the country; in addition to being awarded a scholarship, the winners in each age group get to meet the President of the United States.

Preparing for a Spelling Test 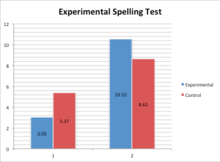 WRAT pre- and post-test results for experimental and control groups

In this method, the student typically writes out each word in the current spelling lesson a set number of times each, for example, 50 to 100 times.

One of the most effective ways to memorize spellings is to make up mnemonics to help remember them. A mnemonic is a memory trick which associates the thing that is to be remembered with something else to make it easier. For spelling, it can be the exaggerated pronunciation of a word, like indepenDENT. Or it might be a silly sentence or visual image to help remember the word, like "the independents all dented their cars with sledgehammers". Or it might describe a key aspect of a word to help remember it, like "all the vowels in cemetery are the same: three little e's, each on its own little tombstone."