The Sri Lanka Electrical and Mechanical Engineers (SLEME) - is a Combat Support corps of the Sri Lanka Army. It is made up of six regular regiments and one volunteer (reserve) regiment. Regiment Center located at Kew Road, Slave Island, Colombo. Present strength of the Corps is 145 Officers and 4150 ORs.

The role of the Sri Lanka Electrical & Mechanical Engineers (SLEME) is to repair and maintain all electrical,mechanical biomedical and optical equipment in the SL Army, except for engineer plant and signal equipment. Repair and recovery teams are employed in the field to give repair and recovery support to operational commitments. In addition to its classic role SLEME is tasked to function essential services such as electricity (power generation), water supply drainage and railways during times of workers unrest and strikes. There are three base workshops at Udawalawe, Katubedda and Colombo for base repairs of vehicles/equipment. Corps is consist with a trade school to up-lift the knowledge of its members at Gannoruwa-Kandy. The SLEME also undertakes the production of Unibuffel APCs.

The Corps of Ceylon Electrical and Mechanical Engineers (CEME) was born on 12 December 1949 with the enlistment of 2/Lt. R.A.J Ratnam CEME. The CEME first became operative as a small workshop, located in the Army Headquarters premises under the advisory capacity of Capt. Roy Davies REME. Activities were initially confined to minor repairs to mechanical transport vehicles, armaments, small arms and the production of a large quantity of training stores. Later an engineer officer, Maj N.V Matthysz was appointed Officer Commanding and was its first Commanding Officer in the rank of Lieutenant Colonel. The unit moved to Kew Road, Slave Island (where its present Regiment Centre is) on 1 September 1950. This was a command workshop of the REME and the CEME was fortunate to get the building with some of the available machinery as most of such machinery was back loaded by the British before the hand over. The CEME strength when moving to the new premises was 1 British Officer seconded form REME, 2 Ceylonese Officers, 4-seconded NCOs from the REME, 14 other ranks and some civilian tradesmen.

Research began in 1983 by a concerned Infantry Major named Jayantha de Silva to locally develop an armored personnel carrier to protect troops against land mines and IEDs that became rampant in the northern and eastern provinces with the escalation of the Sri Lankan civil war. His design was different from that of the South African Buffels that provided protection only against land mines, in that the passenger and driver were in a single compartment built almost two metres from ground level to dissipate the explosive force of the IED. Subsequently the Army's Sri Lanka Electrical and Mechanical Engineers, to whom the construction of the original vehicles was entrusted, developed a second version based on the Buffels which had been brought in 1985. SLEME developed the Unicorn Mark I by 1987, that was produced in large numbers by the SLEME for the Sri Lanka Army and for the other services too with a total of 93 Unicorns being produced. 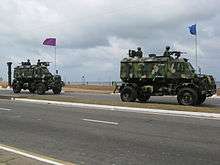 Since 2000 the SLEME shifted to producing the more advanced Unibuffel with a total of 53 Unibuffel being produced as of 2006.

2(V) SLEME Battalion was established on 19 April 2005 at Diyatalawa. At present it is responsible to provide technical(Repair, maintenance and recovery) support to the Security Force Central AOR