St. Albans is a middle class community in the New York City borough of Queens centered on the intersection of Linden Boulevard and Farmers Boulevard, about two miles north of JFK Airport. It is southeast of Jamaica, west of Cambria Heights, north of Springfield Gardens, and northwest of Laurelton.[2] The neighborhood is part of Queens Community Board 12,[3][4] and is served by the St. Albans Post Office, ZIP Code 11412. The population within the ZIP code, according to the 2010 census, was 34,882 – a decline of 7% from the 37,452 of 2000.[1]

The small western enclave of Addisleigh Park is a U.S. historic district where many notable African Americans have lived, including Jackie Robinson, W. E. B. Du Bois, and many jazz musicians and entertainers including Fats Waller, Ella Fitzgerald, Lena Horne, and Count Basie.[5]

Part of a land grant to Dutch settlers from New Netherland Governor Peter Stuyvesant in 1655, the area, like much of Queens, remained farmland and forest for most of the next two centuries.

By the 1800s, the lands of four families—the Remsens, Everitts, Ludlums, and Hendricksons—formed the nucleus of this sprawling farm community in the eastern portion of the Town of Jamaica. In 1814, when the Village of Jamaica (the first village on Long Island) was incorporated, its (the village's) boundaries extended eastward to Freeman's Path (now Farmers Boulevard), and south to Lazy Lane (called Central Avenue in 1900, then Foch Boulevard in the 1920s,[6][7][8] and now Linden Boulevard), thus including parts of present-day St. Albans.[9] In 1852, the old mill pond that is now at the center of Baisley Pond Park was acquired by the Brooklyn waterworks for use as a reservoir.[10]

In 1872, the Long Island Rail Road's Cedarhurst Cut-off was built through the area, but no stop appears on the first timetables. In 1892, an area called Francis Farm was surveyed and developed for housing. There were numerous Francis families farming in the eastern portion of the Town of Jamaica in the 1880s.[11] Francis Lewis Boulevard (named for a signer of the Declaration of Independence, from Queens), which does not yet appear on maps from 1909,[12] nor in 1910,[13] is now the eastern boundary of St. Albans.

In 1899, a year after Queens became part of New York City (and with the Town of Jamaica and the Village of Jamaica thereby dissolved), the new post office for the 600 residents[16] was named St. Albans, after St Albans in Hertfordshire, England, which itself was named after a Saint Alban, thought to be the first Christian martyred in England. The name had been in use for the area since at least 1894 for the name of the school district,[17] and the LIRR station was named St. Albans when it opened in 1898. A 1909 map also shows a St Albans Avenue and a St Albans Place in the area.[12][18]

The St. Albans Golf Course, built in 1915, brought rich and famous golfers, including baseball star Babe Ruth. The Depression forced the golf course owners to try to sell, but plans for private development fell through. The land was seized by the federal government in 1942,[19] and construction soon began on the St. Albans Naval Hospital, which opened in 1943.[20] After construction was completed in 1950,[21] the hospital had 3000 beds and contained a network of 76 wards. The hospital was turned over to the Veterans Administration in 1974 and more recently evolved into the Veterans Administration St. Albans Primary and Extended Care Facility. 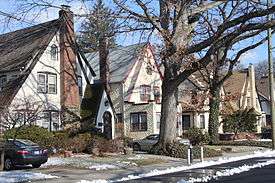 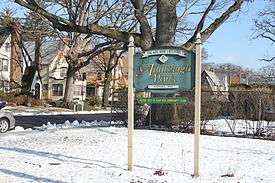 Within St. Albans is the small western enclave of Addisleigh Park, a U.S. historic district that consists of single-family homes built in a variety of styles between the 1910s and 1930s. Though originally intended as a segregated community for white people only, from the late 1930s many notable African Americans have lived there.[5] Today, it remains a predominantly African American enclave that is more upscale than surrounding areas in southeast Queens.[22]

Between 1900 and 1940, the village of Addisleigh Park was developed by a handful of eminent white entrepreneurs including Edwin H. Brown, Gerald C. English, and Alexander Rodman.[23] Restrictive covenants were established to prohibit the sale of any of its properties to blacks.[24] A 1926 New York Times article insists, “Addisleigh, together with the St. Albans Golf Club, was laid out under the personal direction of Edwin H. Brown, and carries a land and house restriction of the highest type.”[25] Two lawsuits were filed successfully by white residents who accused their neighbors of breaking the contractual segregation imposed on the neighborhood by its developers. Simeon Bankoff, Executive Director of the New York Historic Districts Council, says about this backlash “It was unpleasant, as it was a case of a number of narrow-minded neighbors trying to fight what they saw as an invasion of unwanted people in their area.”[26] Affluent white New York City-based public figures moved into Addisleigh Park to experience the privacy of suburban seclusion. Addisleigh Park boasted well-kept rows of Tudor and Colonial homes. The neighborhood's close proximity to Manhattan allowed for quick and frequent commuting. During the Swing Era, Manhattan's 52nd Street served as the epicenter of Swing Era live entertainment and musical innovation. For this reason, many successful African American jazz musicians began to recognize Addisleigh Park as the newest suburban haven for wealthy, influential artists.

In 1948, the United States Supreme Court ruled that racially restrictive covenants violated the equal-protection clause of the 14th Amendment, though by that year, Addisleigh Park had already become a haven for world-famous African Americans in jazz and sports.[27] The neighborhood was declared a historic district by the NYC Landmarks Preservation Commission in 2011.[5]

Public schools are operated by the New York City Department of Education (NYCDOE):

There is one charter school:

Numerous MTA bus lines runs through the neighborhood, including the Q4, Q5, Q42, Q84, and Q85, all of which connect to the New York City Subway and the Long Island Rail Road at Jamaica Center.[29]

As a neighborhood adjacent to Hollis, St. Albans was home to many artists of the Hip Hop and Rap music genres in the 1970s and 1980s.

The neighborhood and the surrounding areas are considered the heart of Queens' working class Black community, with 34% claiming Caribbean ancestry. As of the 2010 United States Census, the vast majority of residents were black, with black residents comprising 92% of the 34,882 people living in St. Albans. Of the remaining 8% of residents, 1.4% are white, 1% are Asian, 2.4% are of another race, and 2.7% are multiracial Americans.[1]

In 2011 The New York Times reported that many foreclosures were occurring and there was a high level of unemployment. At that time, many black people were moving from St. Albans to the Southern United States.[30]

Many famous jazz musicians used to live in St. Albans, particularly in some of the large houses in Addisleigh Park.

The following notable people are known to have lived in the area:

Famous stride pianist Fats Waller was the first well-known musician to move into Addisleigh Park at the peak of his career in the late 1930s. Waller had grown up in the Church (his father was a pastor).[51] He subsequently had his home in Addisleigh Park fashioned with a built-in Hammond organ.[52] He died in 1943 from bronchial pneumonia.

In 1937, jazz pianist and bandleader Count Basie moved his orchestra from Kansas City to New York. Basie made the Woodside Hotel (a Queens staple) his band headquarters. Count Basie’s orchestra performed at world-famous Manhattan venues including the Roseland Ballroom and the Savoy Ballroom. In 1946, Basie and his wife, Katy, bought a home in Addisleigh Park, where the couple lived until 1973 when it was sold to bandleader/singer/pianist, Robert (Bubber) Johnson.[53]

Saxophonist Earl Bostic moved to Addisleigh Park in 1948, the same year Bostic’s sextet hit success with their first single “Temptation”.[55] Bostic was born in Tulsa, Oklahoma. In the early 1930s, he played with Midwestern territory bands before moving to New York City in 1938 to play with Don Redman. Bostic’s second hit, “Flamingo,” was produced in 1951, while he was still living in Addisleigh Park. In 1956, Bostic and his wife left Addisleigh Park to settle in Los Angeles. Earl Bostic died onstage from a heart attack in Rochester, New York, in 1965.

Bostic’s neighbors on Murdock Avenue were Ella Fitzgerald and her then-husband, famous bassist and cellist Ray Brown. Fitzgerald owned her Addisleigh Park home from 1949 until 1956.[56] During the late 1930s and early 1940s, Fitzgerald had become one of the most recognizable names of wide-release swing music in the United States. She met Brown in 1946 while on tour with Dizzy Gillespie’s band.[57] The couple divorced in 1952.[57] Between the years 1949 and 1956, Fitzgerald sang scat with various bebop bands. She was awarded the Presidential Medal of Freedom by President George H. W. Bush in 1992.[58]

Vicksburg, Mississippi native and famous jazz bassist Milt Hinton moved into Addisleigh Park in 1950.[52] In his younger years, he had lived and worked in Chicago alongside celebrated jazz musicians Art Tatum and Eddie South. He moved to New York City for a job in Cab Calloway’s orchestra in 1936. Hinton bought a home on 113th Avenue in Addisleigh Park in 1950. He lived in the neighborhood until his death in 2000.

Saxophonist John Coltrane bought a home on Mexico Street in Addisleigh Park in the year 1959.[59] Coltrane had just met tremendous critical success after his collaborations with Thelonious Monk and Miles Davis. In January 1960, Coltrane released Giant Steps, his first album with Atlantic Records. Giant Steps is considered to be the album that catapulted Coltrane into jazz legend.