Stade Toulousain (French pronunciation: ​[stad tuluzɛ̃]) (Occitan: Estadi Tolosenc), also referred to as Toulouse, is a French rugby union club from Toulouse in Occitania. Toulouse is arguably one of the finest rugby clubs in the world and the most successful in Europe, having won the Heineken Cup a record four times – in 1996, 2003, 2005 and 2010. They were also runners-up in 2004 and 2008 against London Wasps and Munster, respectively. Stade Toulousain have also won a record 19 French Championship titles. It is traditionally one of the main providers for the French national team. Their home ground is the Stade Ernest-Wallon. However, big Top 14 matches along with Heineken Cup games are often played at the Stadium Municipal de Toulouse. The club colours are red, black and white.

Before 1907 rugby in Toulouse was only played in schools or universities. In 1893, students of secondary school "Lycée de Toulouse" got together in "les Sans Soucis". Once attending university the same students founded "l'Olympique Toulousain", which became "Stade Olympien des Etudiants de Toulouse" (SOET) a few years later in 1896. In the same period, 'non-students' grouped in "le Sport Atléthique Toulousain" (SAT) while students of the veterinary school created "l'Union Sportive de l'Ecole Vétérinaire" (USEV). Both entities merged in 1905 and called themselves "Véto-Sport". Finally in 1907, Stade Toulousain was founded resulting from a union between the SOET and Véto-Sport.

The following decades were relatively quiet after such a dominant era during the 1920s. Stade Toulousain would not make it to any grand finals during the 1930s, and it would not be until the late 1940s when they would return. However they did contest the Challenge Yves du Manoir with RC Toulon in 1934, though it ended in a nil-all tie and both teams were winners. The club made it to the final of the 1947 championship, and claimed the premiership, beating SU Agen, 10 to 3. However, no such championships followed, the club was again relatively quiet on the championship. It was 22 years in the waiting; Toulouse made it to the final, but were defeated by the CA Bègles club.

Against the Racing club de France, 1912 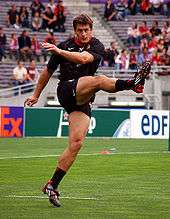 The dominance continued in the 1990s, starting with a grand final loss in 1991, and a Challenge Yves du Manoir championship in 1993, defeating Castres 13 to 8 in the final. The mid-1990s saw Stade Toulousain become a major force yet again, as the club claimed four premierships in a row, winning the championship in 1994, 1995, 1996 and 1997, as well as the Challenge Yves du Manoir in 1995. The club emmulated its success in the European Rugby Cup, becoming the first ever champions in the 1995–96 season.

The late 1990s and the 2000s saw the club again reach great heights. The club won the Challenge Yves du Manoir in 1998, defeating Stade Français Paris, and the 1999 championship as well as the 2001 championship and were runners-up in the 2003 season, losing to Stade Français in the final. As the club had done in the mid-1990s, Stade Toulousain replicated this success in the European Rugby Cup, winning the 2002–03 championship and the 2004–05 championship. The club made it to the final of the 2005–06 Top 14, and despite only trailing Biarritz 9–6 at half time, Toulouse could not prevent a second-half whitewash, eventually going down 40–13. They ended their seven-year title drought with a 26–20 win over ASM Clermont Auvergne on 28 June 2008. In 2008 they narrowly lost a Heineken Cup Final to Munster by 3 points. In 2010 Toulouse defeated Leinster to reach the final where they faced Biarritz Olympique at Stade de France in Paris on Saturday 22 May 2010. Toulouse won the game by 21–19 to claim their fourth Heineken Cup title,[1][2] making them the only club to ever win the title four times. Stade Toulousain is also the only French club to have taken part in all the editions of Heineken Cup since its creation (17, with the 2011–12 season). They won the French championship in 2011 against Montpellier (15–10) and 2012 against Toulon (18–12). Stade Toulousain reached the semi-finals of the French championship 20 consecutive years (from 1994 to 2013).

Toulouse play their home games at the Stade Ernest-Wallon, which was built in the late 1980s and was recently renovated. Stade Toulousain is one of the three teams (all sports included) that own its stadium. It has a capacity of 19,500. The stadium however cannot always accommodate all the fans of the Toulouse club. For the larger fixtures, such as championship or Heineken Cup games or play-offs, the fixture may be moved to Stadium Municipal, which has double capacity, 38,000. The stadium has been used for numerous matches at the 2007 Rugby World Cup

2016–17 Note: Flags indicate national union as has been defined under WR eligibility rules. Players may hold more than one non-WR nationality.