This article is about time synchronization in a given area. For the concept used in industrial engineering, see Standard time (manufacturing).

Standard time is the synchronization of clocks within a geographical area or region to a single time standard, rather than using solar time or a locally chosen meridian (longitude) to establish a local mean time standard. Historically, the concept was established during the 19th century to aid weather forecasting and train travel. Applied globally in the 20th century, the geographical areas became extended around evenly spaced meridians into time zones which (usually) centered on them. The standard time set in each time zone has come to be defined in terms of offsets from Universal Time. In regions where daylight saving time is used, that time is defined by another offset, from the standard time in its applicable time zone(s).

The adoption of standard time, because of the inseparable correspondence between time and longitude, solidified the concepts of halving the globe into an eastern and western hemisphere, with one prime meridian (as well its opposite International Date Line) replacing the various prime meridians that had previously been used.

A standardized time system was first used by British railways on December 1, 1847, when they switched from local mean time, which varied from place to place, to Greenwich Mean Time (GMT). It was also given the name railway time reflecting the important role the railway companies played in bringing it about. The vast majority of Great Britain's public clocks were standardized to GMT by 1855. 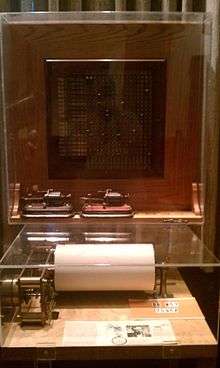 Until 1883 each United States railroad chose its own time standards. The Pennsylvania Railroad used the "Allegheny Time" system, an astronomical timekeeping service which had been developed by Samuel Pierpont Langley at the Western University of Pennsylvania's Allegheny Observatory in Pittsburgh. Instituted in 1869, the Allegheny Observatory's service is believed to have been the first regular and systematic system of time distribution to railroads and cities as well as the origin of the modern standard time system.[1] By 1870 the Allegheny Time service extended over 2,500 miles with 300 telegraph offices receiving time signals.[2] However, almost all railroads out of New York ran on New York time, and railroads west from Chicago mostly used Chicago time, but between Chicago and Pittsburgh/Buffalo the norm was Columbus time, even on railroads such as the PFtW&C and LS&MS, which did not run through Columbus. The Santa Fe Railroad used Jefferson City (Missouri) time all the way to its west end at Deming, New Mexico, as did the east-west lines across Texas; Central Pacific and Southern Pacific Railroads used San Francisco time all the way to El Paso. The Northern Pacific Railroad had seven time zones between St. Paul and the 1883 west end of the railroad at Wallula Jct; the Union Pacific Railway was at the other extreme, with only two time zones between Omaha and Ogden.[3]

In 1870 Charles F. Dowd proposed four time zones based on the meridian through Washington, DC for North American railroads.[4] In 1872 he revised his proposal to base it on the Greenwich meridian. Sandford Fleming, a Canadian, proposed worldwide Standard Time at a meeting of the Royal Canadian Institute on February 8, 1879.[5] Cleveland Abbe advocated standard time to better coordinate international weather observations and resultant weather forecasts, which had been coordinated using local solar time. In 1879 he recommended four time zones across the contiguous United States, based upon Greenwich Mean Time.[6] The General Time Convention (renamed the American Railway Association in 1891), an organization of US railroads charged with coordinating schedules and operating standards, became increasingly concerned that if the US government adopted a standard time scheme it would be disadvantageous to its member railroads. William F. Allen, the Convention secretary, argued that North American railroads should adopt a five-zone standard, similar to the one in use today, to avoid government action. On October 11, 1883, the heads of the major railroads met in Chicago at the Grand Pacific Hotel[7] and agreed to adopt Allen's proposed system.

The members agreed that on Sunday, November 18, 1883, all United States and Canadian railroads would readjust their clocks and watches to reflect the new five-zone system on a telegraph signal from the Allegheny Observatory in Pittsburgh at exactly noon on the 90th meridian.[8][9][10] Although most railroads adopted the new system as scheduled, some did so early on October 7 and others late on December 2. The Intercolonial Railway serving the Canadian maritime provinces of New Brunswick and Nova Scotia just east of Maine decided not to adopt Intercolonial Time based on the 60th meridian west of Greenwich, instead adopting Eastern Time, so only four time zones were actually adopted by U.S./Canadian railroads in 1883.[9] Major American observatories, including the Allegheny Observatory, the United States Naval Observatory, the Harvard College Observatory, and the Yale University Observatory, agreed to provide telegraphic time signals at noon Eastern Time.[9][10]

Standard time was not enacted into US law until the 1918 Standard Time Act established standard time in time zones; the law also instituted daylight saving time (DST). The daylight saving time portion of the law was repealed in 1919 over a presidential veto, but was reestablished nationally during World War II.[11][12] In 2007 the US enacted a federal law formalizing the use of Coordinated Universal Time as the basis of standard time, and the role of the Secretary of Commerce (effectively, the National Institute of Standards and Technology) and the Secretary of the Navy (effectively, the U.S. Naval Observatory) in interpreting standard time.[13]

In 1999, standard time was inducted into the North America Railway Hall of Fame in the category "National: Technical Innovations."[14]

The Dominion of Newfoundland, whose capital St. John's falls almost exactly midway between the time zones of Atlantic Time Zone and Greenland Time Zone, voted to create a half-hour time zone known as the Newfoundland Time Zone; it is set at GMT-3:30.

In the Netherlands, introduction of the railways made it necessary to create a standard time. On 1 May 1909, the Amsterdam Time or Dutch Time was introduced. Before that, time was measured in different cities and in the east of the country, it was normal to be a few minutes later than in the west of the country. In 1909, a national time was introduced which was the same as the local time of Amsterdam, to be precise the exact time of the Wester Tower (Westertoren/4°53'01,95"O). This time was indicated as GMT +0h 19m 32.13s until 17 March 1937, after which it was simplified to GMT+0h20m. This time zone was also known as the Loenen time or Gorinchem time, as this was the exact time in both Loenen and Gorinchem. At noon in Amsterdam, it was 11:40 in London and 12:40 in Berlin.

The shift to the current Central European Timezone took place on 16 May 1940. The German occupiers ordered to move the clock an hour and forty minutes forward. Originally, this time was kept both summer and winter throughout 1941 and 1942. It was only in November 1942 that a different Winter time was introduced and time was adjusted one hour backwards. This lasted for only three years, after the liberation of the Netherlands in 1945, the Summer time was abolished for over thirty years. Hence, the Netherlands was during that time forty minutes off the original Amsterdam Time. Presently, the Netherlands is in line with Central European Time (GMT+1 in the winter, GMT+2 in the summer, which is significantly different from Amsterdam Time).