Sir Sandford Fleming, KCMG (January 7, 1827 – July 22, 1915) was a Canadian engineer and inventor. Born and raised in Scotland, he emigrated to colonial Canada at the age of 18. He proposed worldwide standard time zones,[1] designed Canada's first postage stamp, left a huge body of surveying and map making, engineered much of the Intercolonial Railway and the Canadian Pacific Railway, and was a founding member of the Royal Society of Canada and founder of the Royal Canadian Institute, a science organization in Toronto.

In 1827, Fleming was born in Kirkcaldy, Fife, Scotland to Andrew and Elizabeth Fleming. At the age of 14 he was apprenticed as a surveyor and in 1845, at the age of 18, he emigrated with his older brother David to colonial Canada. Their route took them through many cities of the Canadian colonies: Quebec City, Montreal, and Kingston, before settling in Peterborough with their cousins two years later in 1847. He qualified as a surveyor in Canada in 1849.

In 1849 he created the Royal Canadian Institute with several friends, which was formally incorporated on November 4, 1851. Although initially intended as a professional institute for surveyors and engineers it became a more general scientific society. In 1851 he designed the Threepenny Beaver, the first Canadian postage stamp. Throughout this time he was fully employed as a surveyor, mostly for the Grand Trunk Railway. His work for them eventually gained him the position as Chief Engineer of the Northern Railway of Canada in 1855, where he advocated the construction of iron bridges instead of wood for safety reasons.

Fleming served in the 10th Battalion Volunteer Rifles of Canada (later known as the Royal Regiment of Canada) and was appointed to the rank of Captain on January 1, 1862. He retired from the militia in 1865. 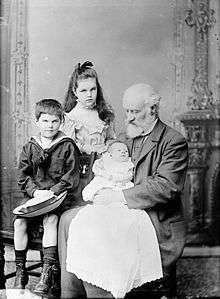 Fleming with his grandchildren in 1893

As soon as he arrived in Peterborough in 1845, Fleming became friendly with the family of his future wife, the Halls, and was attracted to Ann Jane (Jeanie) Hall. However, it was not until a sleigh accident almost ten years later that the young people’s love for each other was revealed. A year after this incident, in January 1855, Sandford married Ann Jane (Jean) Hall. They were to have nine children of whom two died young. The oldest son, Frank Andrew, accompanied Fleming in his great Western expedition of 1872. A family man, deeply attached to his wife and children, he also welcomed his father Andrew Greig Fleming, Andrew's wife and six of their other children who came to join him in Canada two years after his arrival. The Fleming and Hall families saw each other often.

After the death of his wife Jeanie in 1888, Fleming`s niece Miss Elsie Smith, daughter of Alexander and Lily Smith, of Kingussie, Scotland, presided over his household "Winterholme" 213 Chapel Street, Ottawa, Ontario.[2]

His time at the Northern Railway was marked by conflict with the architect Frederick William Cumberland, with whom he started the Canadian Institute and who was general manager of the railway until 1855. Starting as assistant engineer in 1852, Fleming replaced Cumberland in 1855 but was in turn ousted by him in 1862. In 1863 he became the chief government surveyor of Nova Scotia charged with the construction of a line from Truro to Pictou. When he would not accept the tenders from contractors that he considered too high, he was asked to bid for the work himself and completed the line by 1867 with great savings to the government and at profit to himself.[3] 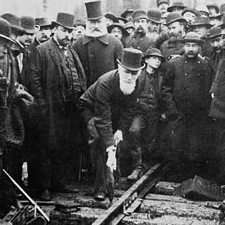 In 1862 he placed before the government a plan for a transcontinental railway connecting the Atlantic and Pacific oceans.[4] The first part, between Halifax and Quebec became an important part of the preconditions for New Brunswick and Nova Scotia to join the Canadian Federation because of the uncertainties of travel through Maine because of the American Civil War. In 1867 he was appointed engineer-in-chief of the Intercolonial Railway which became a federal project and he continued in this post till 1876. His insistence on building the bridges of iron and stone instead of wood was controversial at the time, but was soon vindicated by their resistance to fire.[5]

By 1871, the strategy of a railway connection was being used to bring British Columbia into federation and Fleming was offered the chief engineer post on the Canadian Pacific Railway. Although he hesitated because of the amount of work he had, in 1872 he set off with a small party to survey the route, particularly through the Rocky Mountains, finding a practicable route through the Yellowhead Pass. One of his companions, George Monro Grant wrote an account of the trip, which became a best-seller.[6] By 1880, with 600 miles completed, a change of government brought a desire for a private company to own the whole project and Fleming was dismissed by Sir Charles Tupper, with a $30,000 payoff.[5][7] It was the hardest blow of Fleming's life, though he obtained a promise of monopoly, later revoked, on his next project, a trans-pacific telegraph cable.[5] Nevertheless, in 1884 he became a director of the Canadian Pacific Railway and was present as the last spike was driven.

After missing a train in 1876 in Ireland because its printed schedule listed p.m. instead of a.m., he proposed a single 24-hour clock for the entire world, located at the centre of the Earth, not linked to any surface meridian.[8] At a meeting of the Royal Canadian Institute, on February 8, 1879, he linked it to the anti-meridian of Greenwich (now 180°). He suggested that standard time zones could be used locally, but they were subordinate to his single world time, which he called Cosmic Time. He continued to promote his system at major international conferences[9] including the International Meridian Conference of 1884. That conference accepted a different version of Universal Time but refused to accept his zones, stating that they were a local issue outside its purview. Nevertheless, by 1929, all major countries in the world had accepted time zones.

When the railway privatization instituted by Tupper in 1880 forced him out of a job with government, he retired from the world of surveying, and took the position of Chancellor of Queen's University in Kingston, Ontario. [10] He held this position for his last 35 years, where his former Minister George Monro Grant was principal from 1877 until Grant's death in 1902. Not content to leave well enough alone, he tirelessly advocated the construction of a submarine telegraph cable connecting all of the British Empire, the All Red Line, which was completed in 1902.

He also kept up with business ventures, becoming in 1882 one of the founding owners of the Nova Scotia Cotton Manufacturing Company in Halifax. He was a member of the North British Society.[11] He also helped found the Western Canada Cement and Coal Company, which spawned the company town of Exshaw, Alberta. In 1910, this business was captured in a hostile take-over by stock manipulators acting under the name Canada Cement Company, which action was said by some to lead to an emotional depression that would contribute to Fleming's death a short time later.[12]

In 1880 he served as the vice president of the Ottawa Horticultural Society.[13]

His accomplishments were well known worldwide, and in 1897 he was knighted by Queen Victoria. He was a freemason.[14]

In 1883, while surveying the route of the Canadian Pacific Railway with George Monro Grant, he met Major A. B. Rogers near the summit of Rogers Pass (British Columbia) and co-founded the first "Alpine Club of Canada".[15] That early alpine club was short-lived, but in 1906 the modern Alpine Club of Canada was founded in Winnipeg, and the by then Sir Sandford Fleming became the Club's first Patron and Honorary President.[16]

In his later years he retired to his house in Halifax, later deeding the house and the 95 acres (38 hectares) to the city, now known as Sir Sandford Fleming Park (Dingle Park). He also kept a residence in Ottawa, and was buried there, in the Beechwood Cemetery. 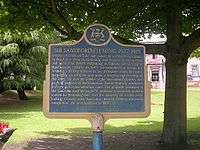 The town of Fleming, Saskatchewan (located on the Canadian Pacific Railway) was named in his honour in 1882.[17]

Fleming Hall was built in his honour at Queen's in 1901, and rebuilt after a fire in 1932. It was the home of the university's Electrical Engineering department.

In Peterborough, Ontario, Fleming College, a Community College of Applied Arts and Technology bearing his name, was opened in 1967, with additional campuses in Lindsay/Kawartha Lakes, Haliburton, and Cobourg.

Also, the main building of University of Toronto Faculty of Applied Science and Engineering and Sandford Fleming Academy are named after Fleming (Sandford Fleming building).

Sir Sanford Fleming elementary school was built in Vancouver in 1913.

Mount Sir Sandford, which is the highest mountain in the Sir Sandford Range of the Selkirk Mountains, and the 12th highest peak in British Columbia, is named after him.[18]