For other uses, see Steeple (disambiguation). 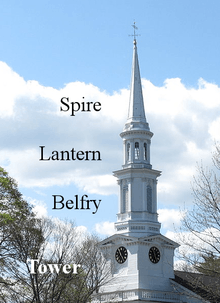 A steeple, in architecture, is a tall tower on a building, topped by a spire and often incorporating a belfry and other components. Steeples are very common on Christian churches and cathedrals and the use of the term generally connotes a religious structure. They may be stand-alone structures, or incorporated into the entrance or center of the building.

Clock towers were not a part of Christian churches until about AD 600, when they were adapted from military watchtowers. At first they were fairly modest and entirely separate structures from churches. Over time, they were incorporated into the church building and capped with ever-more-elaborate roofs until the steeple resulted. St. Martin's church steeple, in Arbon, Switzerland, is a good example of such an early church tower. Once the entry tower to the Roman fort "Arbor Felix", it today stands as a separate tower, adapted in style over many centuries, but where in 612 AD, it very likely greeted the Irish missionary Gallus as he joined the already established Christian community there.

Towers are a common element of religious architecture worldwide and are generally viewed as attempts to reach skyward toward heavens and the divine.[1] Some wooden steeples like the one in Kingston, New York pictured below are built with large wooden structural members arranged like tent poles and braced diagonally inside both with wood and steel. The steeple is then clad with wooden boards and finished with slate tiles nailed to the boards using copper over gaps on corners where the slate would not cover.

Steeples can be vulnerable to earthquakes. A number of Romanian churches feature unusually slender steeples and over half of these have been lost to earthquakes.[2] Because of their height, steeples can also be vulnerable to lightning, which can start fires within steeples. An example of this is Holy Trinity Church in Luxemburg, Iowa, which lost its steeple in a fire which was believed to be started by a lightning strike.[3]