This article is about clock towers. For the video game series, see Clock Tower (series). For the UAE roundabout, see Deira Clocktower.

Clock towers are a specific type of building which houses a turret clock and has one or more clock faces on the upper exterior walls. Many clock towers are freestanding structures but they can also adjoin or be located on top of another building.

Clock towers are a common sight in many parts of the world with some being iconic buildings. One example is the Elizabeth Tower in London (sometimes erroneously called 'Big Ben', although this name belongs only to the bell inside the tower).

There are many structures which may have clocks or clock faces attached to them and some structures have had clocks added to an existing structure. According to the Council on Tall Buildings and Urban Habitat a building is defined as a building if at least fifty percent of its height is made up of floor plates containing habitable floor area. Structures that do not meet this criterion, are defined as towers. A clock tower historically fits this definition of a tower and therefore can be defined as any tower specifically built with one or more (often four) clock faces and that can be either freestanding or part of a church or municipal building such as a town hall. Not all clocks on buildings therefore make the building into a clock tower.

The mechanism inside the tower is known as a turret clock. It often marks the hour (and sometimes segments of an hour) by sounding large bells or chimes, sometimes playing simple musical phrases or tunes.

Presumably the first depiction of a medieval central European clock tower (without the actual turret clock) in the 13th century by Villard de Honnecourt, entitled:"cest li masons don orologe" ("this is the house of a clock")

Although clock towers are today mostly admired for their aesthetics, they once served an important purpose. Before the middle of the twentieth century, most people did not have watches, and prior to the 18th century even home clocks were rare. The first clocks didn't have faces, but were solely striking clocks, which sounded bells to call the surrounding community to work or to prayer. They were therefore placed in towers so the bells would be audible for a long distance. Clock towers were placed near the centres of towns and were often the tallest structures there. As clock towers became more common, the designers realized that a dial on the outside of the tower would allow the townspeople to read the time whenever they wanted. 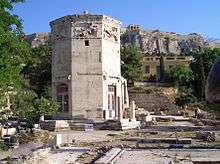 The Tower of the Winds in Athens, dates back to around 50 BC.

The use of clock towers dates back to the antiquity. The earliest clock tower was the Tower of the Winds in Athens which featured eight sundials. In its interior, there was also a water clock (or clepsydra), driven by water coming down from the Acropolis.[1] In Song China, an astronomical clock tower was designed by Su Song and erected at Kaifeng in 1088, featuring a liquid escapement mechanism. In England, a clock was put up in a clock tower, the medieval precursor to Big Ben, at Westminster, in 1288;[2][3] and in 1292 a clock was put up in Canterbury Cathedral.[2] The oldest surviving turret clock formerly part of a clock tower in Europe is the Salisbury cathedral clock, completed in 1306; and another clock put up at St. Albans, in 1326, 'showed various astronomical phenomena'.[2]

Al-Jazari constructed an elaborate clock and described it in his Book of Knowledge of Ingenious Mechanical Devices in 1206. It was about 3.3 metres (11 feet) high, and had multiple functions alongside timekeeping. It included a display of the zodiac and the solar and lunar paths, and a pointer in the shape of the crescent moon which travelled across the top of a gateway, moved by a hidden cart and causing automatic doors to open, each revealing a mannequin, every hour.[4][5] It was possible to re-program the length of day and night daily in order to account for the changing lengths of day and night throughout the year, and it also featured five robotic musicians who automatically play music when moved by levers operated by a hidden camshaft attached to a water wheel. Other components of the castle clock included a main reservoir with a float, a float chamber and flow regulator, plate and valve trough, two pulleys, crescent disc displaying the zodiac, and two falcon automata dropping balls into vases.[6]

Line (mains) synchronous tower clocks were introduced in the United States in the 1920s. 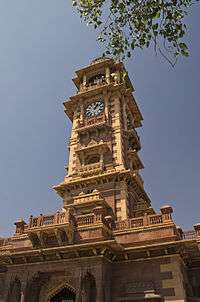 One of the landmark Ghanta Ghar (Indian clock towers) in Jodhpur, Rajasthan, India

Some clock towers have become famous landmarks. Some examples are Elizabeth Tower built in 1859, which houses the Great Bell (generally known as Big Ben) in London, the tower of Philadelphia City Hall, the Rajabai Tower in Mumbai, the Spasskaya Tower of the Moscow Kremlin, the Torre dell'Orologio in the Piazza San Marco in Venice, Italy, and Zytglogge clock tower in the Old city of Bern, Switzerland.[7] 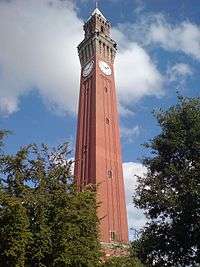 'Old Joe' in Birmingham, UK: the tallest free-standing clock tower in the world.

The tallest freestanding clock tower in the world is the Joseph Chamberlain Memorial Clock Tower at the University of Birmingham in the United Kingdom.[8] The tower stands at 100 metres (330 feet) tall and was completed in 1908. The clock tower of Philadelphia City Hall was the tallest building in the world from 1901 to 1908.