Stephen Kendall "Steve" Gadd (born April 9, 1945[1]) is an American musician. Gadd is one of the most well-known and highly regarded session and studio drummers in the industry, recognized by his induction into the Modern Drummer Hall of Fame in 1984.[2] Gadd's groove on Paul Simon's "50 Ways to Leave Your Lover", and drum solo on Steely Dan's "Aja", are both examples of his seminal sound and signature style. He has worked with popular musicians from a wide range of genres including notably Simon & Garfunkel, Steely Dan, James Taylor, Eric Clapton, Joe Cocker, Grover Washington Jr., Chick Corea, Lee Ritenour and Al Di Meola.

Gadd is a native of Irondequoit, New York, a suburb of Rochester. When he was seven years old, his uncle, a drummer in the US Army, encouraged him to take drum lessons. By the age of eleven Gadd had sat in with Dizzy Gillespie. In a Modern Drummer interview Gadd mentioned that some of his influences at a young age and later on included Buddy Rich, Elvin Jones, Tony Williams, and the "less is more" style of Rick Marotta.[3]

After graduating from Irondequoit's Eastridge High School, he attended the Manhattan School of Music for two years before transferring to the Eastman School of Music in Rochester, playing in wind ensembles and concert bands. After Gadd finished college in the late 1960s, he played regularly with Chuck Mangione and his brother Gap. His first recording was on Gap Mangione's debut solo album, Diana in the Autumn Wind (1968).

Gadd was drafted into the U.S. Army and spent three years as a drummer in the Army Music Program, most of which was spent with the Jazz Ambassadors of the U.S. Army Field Band in Fort Meade, MD. While living in the Washington, D.C. area, he briefly took lessons from the noted jazz drummer Michael S. Smith. Following his military service, Gadd played and worked with a band in Rochester. In 1972, Gadd formed a trio with Tony Levin and Mike Holmes, traveling to New York with them. The trio eventually broke up, but Gadd began to work mainly as a studio musician. Gadd also played with Chick Corea's Return to Forever but left the group. In the 1970s and 1980s, he toured internationally, and recorded with Paul Simon and also with Al Di Meola's Electric Rendezvous Band.

In 1976, Gadd and other session musicians in New York City, including Richard Tee, Eric Gale and Cornell Dupree, formed the group Stuff. Their work included appearances on NBC's Saturday Night Live, both performing on their own and backing Joe Cocker. By the end of the 1970s, Gadd was an accomplished drummer, with transcriptions of his drum solos on sale in Japan. Corea once commented, "Every drummer wants to play like Gadd because he plays perfect.... He has brought orchestral and compositional thinking to the drum kit while at the same time having a great imagination and a great ability to swing."[4]

In 2005, along with Abraham Laboriel, Patrice Rushen and others, Gadd was awarded an honorary Doctor of Music degree from Berklee College of Music for outstanding contributions to contemporary music.[5][6]

"How many drummers does it take to change a lightbulb?" joked Phil Collins. "Ten. And then another ten to talk about how Steve Gadd would have done it."[7] 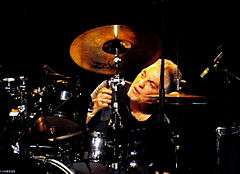 In 1975, Gadd played drums on "The Hustle" by Van McCoy and the Soul City Symphony. That same year, he also played the recognizable drum intro and beat behind Paul Simon's hit, "50 Ways to Leave Your Lover". Gadd demonstrated his strengths in his work on the title track of Steely Dan's Aja album, including solos under both Wayne Shorter's tenor sax solo and in the song's tag. Chick Corea's straight-ahead jazz albums Friends and Three Quartets, as well as Jim Hall's 1975 album Concierto are some more examples of Gadd's jazz playing. In 1979, Gadd performed a drum solo on Carly Simon's Spy LP. Gadd also played drums for one of Charles Mingus' posthumous tracks, "Three Worlds of Drums", off of the album, Me, Myself an Eye, which featured five percussionists, including him.

In 1981, Gadd played in the famous Simon & Garfunkel's Concert in Central Park. He was a featured performer in the 1980 motion picture One Trick Pony starring Paul Simon. Simon's hit "Late in the Evening" was the movie's main title in which Gadd implemented the "Mozambique", a Cuban dance rhythm, into the song. Frank Sinatra's 1984 studio album LA Is My Lady featured a large orchestra of some of the world's top session musicians, including Steve Gadd, under the direction of Quincy Jones.. Gadd also played with Grover Washington, Jr. on "Winelight" and "Come Morning" records and a live Grover Washington Jr. video concert.

Gadd recorded and toured with Eric Clapton in 1994/1996 and again from 1997 to 2004. 1997 also saw him on a world tour in a trio with the French jazz great Michel Petrucciani and his long time band colleague, bassist Anthony Jackson (captured on the Trio in Tokyo CD and Live in Stuttgart DVD/VHS).

Gadd played on the blues album Riding with the King along with B.B. King, Eric Clapton and Jimmie Vaughan and a few others.

In 2009, Gadd returned to Clapton's band to play 11 nights at the Royal Albert Hall and was part of Clapton's touring band throughout May 2009.

Gadd played next to Eric Clapton at Crossroads show. In 2011, Gadd worked with Kate Bush on her 50 Words for Snow album, and she declared during an interview by Jamie Cullum that she had wanted to work with Steve Gadd for a long time but had not had the courage to approach him; she described him as "a sweet person, really down to earth" and said that "his interpretation of music is so sophisticated", and also that she loved working with him due to a real chemistry that started to click in.

Gadd endorses and uses Yamaha drums, pedals & hardware,[9][10] Zildjian cymbals,[10][11] Remo drumheads,[10][12] Latin Percussion,[10][13] Earthworks microphones,[10][14] Vic Firth sticks and brushes[10][15] and Beato bags.[16] Before signing on with Yamaha, Gadd played a mixed kit that included a Gretsch bass drum (20") and Pearl concert toms customized by Frank Ippolito's Professional Percussion Center in New York. By using Evans hydraulic heads with added bottom heads he was able to get a deeper, richer tone that became known as his signature sound, a sound still popular 30 years later. Gadd now mainly uses the "Steve Gadd Commemorative" kit, which Yamaha made for the 30th anniversary of his collaboration with the company. The kit consists of a 22"x14" maple bass drum and 12"x8", 13"x9", 14"x12" and 16"x14" birch tom toms. He uses his 14"x5.5" Yamaha Steve Gadd signature steel snare drum with wood hoops. He also has birch and maple versions of the snare drum.

He uses Zildjian cymbals, and he collaborated with Zildjian when they made the K Custom Session cymbals.

Gadd also has Vic Firth sticks with his signature on them. The drumsticks are very light and thin, black in color, and have normal "wood color" on the tips. There is also an identical model with nylon tips. The stick is slightly shorter than the American Classic 5A, and features a barrel tip for improved recording sound. It is 15 3⁄4 in (40.0 cm) long and the diameter is .550 in (1.40 cm). In addition to having his own signature stick, he also has his own signature brushes. These brushes are intended to solve the problem of wire brushes snagging on new coated drumheads by slightly angling the wires in the top 3/4” (1.9 cm) of the playing end. The wires glide across the head, allowing a smoother sweep and a velvet swish sound.

Gadd uses a variety of Remo heads: a Coated Powerstroke 3 on the batter side of the snare with a Hazy Diplomat on the resonant side of the snare, Clear Pinstripes or Coated Ambassadors on the batter sides of toms, and Clear Ambassadors for the resonant sides. He is using a Coated Powerstroke 3 both on his snare and kick drum.[16][17][18]