Stone Sour is an American rock band formed in Des Moines, Iowa in 1992, performing for five years, before disbanding in 1997. They reunited in 2000 and since 2006, the group has consisted of Corey Taylor (lead vocals), Josh Rand (guitar) and Roy Mayorga (drums). Longtime members Joel Ekman (drums, percussion), Shawn Economaki (bass guitar), and Jim Root (guitar) left the group in 2006, 2011, and 2014 respectively.

Stone Sour earned the group two Grammy Award nominations, both for Best Metal Performance, for the singles "Get Inside", in 2003,[1] and "Inhale", in 2004.[2] The album went on to become RIAA certified Gold.[3] In 2006, following the release of Come What(ever) May, the group received another Grammy Award nomination for Best Metal Performance for the single "30/30-150".[4]

Stone Sour was founded by Corey Taylor, who eventually became the vocalist of Slipknot, and former drummer Joel Ekman. Taylor's longtime friend Shawn Economaki joined shortly after, and filled in as the bass player. During these formative years, Stone Sour recorded two demo tapes,[3] in 1993 and 1994. Shortly after, in 1995, Jim Root, who is now part of Slipknot with Taylor, joined the band. The group was complete, and in 1996, it recorded another demo tape, songs from which would later be used in 2002 on their self-titled debut album, Stone Sour. The band was named after an alcoholic drink that consists of one part whiskey, one part orange juice, with a splash of sour mix.

In 1997, the band went on hiatus, during which Taylor and Root spent most of their time with Slipknot, who were another up-and-coming act in Des Moines and would soon earn a record deal. Root actually did not join the band until over a year after Taylor, and Economaki went on to become Stage left guitar tech. 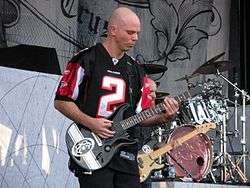 After Josh Rand joined the band, the band recorded their debut self-titled album in Cedar Falls. Upon release, the album charted at number 46 on the Billboard 200.[5] The song "Bother", which was featured on the Spider-Man soundtrack (credited only to Taylor),[3] peaked at number 2 on the Mainstream Rock Chart as well as number 4 on the Modern Rock Tracks and 56 on the Billboard Hot 100.[6] The next single, "Inhale", peaked at 18 on the Mainstream Rock chart.[6] The group received two Grammy Award nominations for Best Metal Performance for the singles "Get Inside"[1] and "Inhale"[2] in 2003 and 2004 respectively. The album went on to achieve Gold certification.[3] The band toured for six months with label mates Sinch and Chevelle before going on a temporary hiatus as Taylor and Root went back to join Slipknot for another album and tour.[3]

The band came back in 2006 to release their second studio album, Come What(ever) May. They parted ways with drummer Joel Ekman, currently drumming for Isaac James, who left to take care of his cancer-stricken son, and later recruited current drummer, Roy Mayorga (Soulfly, and later Amebix). The track "30/30-150" was recorded with Godsmack drummer Shannon Larkin.[7] The album was released on August 1, 2006. It was met with positive reviews from critics, and sold 80,000 copies in the first week, allowing it to debut at number four on the Billboard 200.[5] The band toured for the next year and a half, releasing the Live in Moscow album exclusively to iTunes on August 14, 2007.[3] 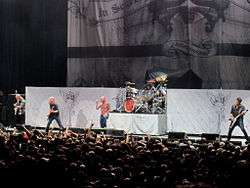 The band's third album Audio Secrecy,[3] was recorded at the Blackbird Studios in Nashville, Tennessee with producer Nick Raskulinecz, who was the producer for the band's second album Come What(ever) May.[8] and released on September 7, 2010 .[9] Taylor stated that “Audio Secrecy is the summation of everything we want, everything we crave and everything we fight for...The dimensions go further than anything we've ever tried before. It's metal, rock, slow, soft, hard, fast, bitter, beautiful and most importantly, it's real. You can't get an album like this out of a band that doesn't exist. We're throwing caution out the damn window.”

Stone Sour played the first annual Rockstar Energy Drink Uproar Festival with Avenged Sevenfold and Hollywood Undead among others.[10] Stone Sour set the release date of Audio Secrecy as September 7. Stone Sour were part of the Soundwave Festival in late February/early March in Australia 2011.[11] Stone Sour headlined The Avalanche Tour, supported by Theory of a Deadman, Skillet, Halestorm and Art of Dying. It was also announced that a Stone Sour live DVD will be released, filmed at the Brighton Centre in the United Kingdom. The band toured with Avenged Sevenfold, New Medicine and Hollywood Undead on the "Nightmare After Christmas Tour" 2011.

On April 16, 2011, it was announced that bassist Shawn Economaki had left the tour for personal reasons. Jason Christopher, who had played with Corey Taylor previously during his solo performances and with the Junk Beer Kidnap Band, filled in for the tour. In May 2011, Stone Sour canceled the remaining dates from their headline tour as drummer, Roy Mayorga suffered a minor stroke. He made a full recovery.[12] The band played their last show of 2011 at the second day of the Rock in Rio IV festival, which took place in Rio de Janeiro, Brazil, between September 23 – October 2. Drummer Roy Mayorga was not present at the show as he was expecting his first child back home, and filling-in for him was ex-Dream Theater and The Winery Dogs drummer Mike Portnoy.[13] Bassist Shawn Economaki was also absent from the performance.

The band released a song called "The Pessimist" as a free download on their Facebook page on March 27, 2012. The song was previously only available on the iTunes deluxe version of the soundtrack to Transformers: Dark of the Moon. They also released their first DVD Live at Brighton in the same year, capturing their performance on November 7, 2010.[14] 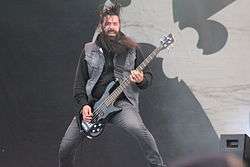 It was announced via Instagram on May 3, 2012 that bassist Shawn Economaki had parted ways with the band on amicable terms. He was replaced in the studio by current Skid Row bassist Rachel Bolan.[15] Stone Sour started recording their fourth studio album in early 2012.[16] Corey Taylor stated that the album would end up being a double album or concept album, and described the album's sound as "Pink Floyd's The Wall meets Alice in Chains's Dirt".[17] It was later announced that the new material would be released as two separate albums. The first album, House of Gold & Bones – Part 1 was released worldwide on October 23, 2012, and the second album House of Gold & Bones – Part 2 was released worldwide on April 9, 2013. The project also has a 4-part graphic novel series that accompanies the albums, telling the linear storyline featured in the twin albums' lyrics.

The first two songs from Part 1, "Gone Sovereign" and the first official single, "Absolute Zero" were released for radio airplay in mid/late August 2012.[18] The first single from House of Gold & Bones Part 2 was "Do Me a Favor".[19][20] It was released digitally on February 12.[21] Guitarist Josh Rand stated in an interview with O2 Academy[22] that there was a song recorded for Part 1, an instrumental which was deemed 'not up to par' by the band. The song will likely be released in the future once James Root and Josh Rand do 'some stuff to it guitar-wise'.

On October 5, 2012, Johny Chow of Fireball Ministry and Cavalera Conspiracy was announced as the bassist for the band on the House of Gold & Bones tour cycle.[23] Stone Sour subsequently played Soundwave Festival 2013 in Australia and on the Sunday at Download Festival 2013. Guitarist James Root did not tour with Stone Sour in the winter of 2013, as he had to take a brief hiatus from the group to work on .5: The Gray Chapter with Slipknot, although it was later revealed that he was fired from the band due to musical differences. He claimed that the band wanted to focus on "radio play and money," in which Root fought against, and that led to a split.[24][25] Christian Martucci filled in for Root during that period.

On October 5, 2014, it was announced via Stone Sour's Facebook page that the band had begun recording a covers EP, which is due to be titled Meanwhile in Burbank and released in 2015.[26] Corey Taylor stated about the covers EP: "This is something that we've been talking about since the first album came out, with [Stone Sour]. We've always wanted to do this. Even as people have come, people have gone, this is still something we've always come back to, and we just never had the opportunity to do it. And we just kind of said, 'Well, screw it.'"[27]

In February 9, 2015, Stone Sour released an official music video and track, which is a cover version of the Metal Church's song "The Dark".[27] The EP was released on April 18, 2015. Corey Taylor confirmed that two more covers EPs are to be produced, they will be titled Straight Outta Burbank and No Sleep Till Burbank and will feature covers of songs by Rage Against The Machine, Mötley Crüe, Bad Brains and Violent Femmes.

Straight Outta Burbank..., the second volume in the series, has since been released.

On July 26, 2016 frontman Corey Taylor has told Billboard.com that the band has written and demoed 18 songs for its sixth studio album, with plans to hit the studio in January for a likely mid-2017 release. [28]

Guitarist Josh Rand stated in an interview, that he tries to bring metal aspect and elements of thrash metal in their music. He also stated that his writing style is different than compared to Slipknot's writing style.[34]

Stone Sour's fourth and fifth albums, House of Gold & Bones - Part 1 and Part 2 are notable for their concept album format, and has led to comparisons to progressive rock bands. When asked about this, Josh Rand stated: "I still think it’s us. We never said that we would be Genesis or Dream Theater or Yes or any of those types of bands. We're not a prog band. We said we're going to adopt the ideas of those stories and stuff, but it's still going to be a Stone Sour record, where you can still pull those individual songs. We just wanted to offer something more - in a world where it's all about singles, we just wanted to do something different. We've always evolved from record to record, if you listen to our entire catalog."[35] Both albums have been critically acclaimed.