Rock in Rio is a recurring music festival originating in Rio de Janeiro, Brazil. It later branched into other locations such as Lisbon, Madrid and Las Vegas.

The first edition of the festival was held from January 11–20, 1985. Queen, George Benson, Rod Stewart, AC/DC and Yes were the headliners, each occupying top spot for two nights (Benson, however, ceded it to James Taylor for their second night in the same bill, due to the huge delay Taylor's extended performance had caused to his concert two days before). About 1.4 million people attended the 10-day-long festival.

Rock in Rio in numbers

The full list of artists who performed at Rock in Rio:

The second edition was held from January 18–27, 1991 at the Maracanã stadium. Headliners were Guns N' Roses, Prince and George Michael, each being top billed for two of the event's nine nights. INXS, New Kids on the Block and A-ha also got top billing, for one night each.

Full list of artists who performed at Rock in Rio 2:

Guns N' Roses's January 20 concert was their first ever with then new drummer Matt Sorum and keyboard player Dizzy Reed. George Michael's second concert, on January 27, the festival's closing day, featured his ex-Wham! partner Andrew Ridgeley, who joined Michael for a few songs at the encore. Again a misplaced Brazilian act suffered from bad reception, with Lobão being pelted with beer cans and being forced to cut his performance short.

Iron Maiden recorded their set and released it as the live album Rock in Rio. The profits from the sale of the album were donated to the Clive Burr fund, which would help the former drummer pay mounting medical bills for treatment of his multiple sclerosis.

Another notable appearance at Rock in Rio 3 was that of American hard rock band Guns N' Roses, with a new line-up featuring guitarist Buckethead, original member and lead singer Axl Rose (vocals), and longtime member Dizzy Reed (keyboards). Carlinhos Brown, the opening act on the day Guns N' Roses performed, was attacked by water bottles throughout his whole performance.[5] Bassist Nick Oliveri of Queens of the Stone Age performed in the nude for part of their set and was arrested for indecent exposure after the concert, being released soon after.

Full list of artists who performed at Rock in Rio 3: 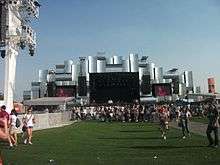 The Palco Mundo (World Stage) at the Rock in Rio 4 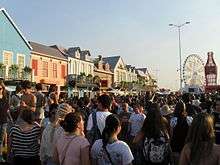 The Rock Street at the Rock in Rio 4

Three different stages were employed, with the headlining concerts at the Palco Mundo (World Stage), the secondary ones in Palco Sunset (Sunset Stage), and DJs playing at a specialized stage for electronic music. The closing acts, Guns N' Roses and System of a Down, entered following a poll on the festival's website.[6] Maroon 5 was a last hour addition, following Jay-Z leaving for personal reasons.

The sixth Brazilian edition was held from September 18 to 27, 2015 at the City of Rock. The headliners were Queen + Adam Lambert, Metallica, Rod Stewart, Elton John, System of a Down, Slipknot, Rihanna and Katy Perry.

After the huge success of Rock in Rio 3 in Brazil, Roberta Medina decided to organize a festival of the same stature in Lisbon. The decision to maintain the name Rock in Rio was controversial, and detractors of the idea in Brazil started calling it Rock in Rio Tejo,[12][13] after the Tagus river (rio Tejo, in Portuguese) which runs through the Portuguese capital.

The first edition of Rock in Rio Lisboa, as the festival was officially called, took place in 2004. Although the festival had a slight change of name, it kept the same structure as the Brazilian editions. An entire City of Rock, with an area of over 260,000 audience was erected at the Bela Vista park, with a large centre stage and several tents where different artists would perform, simultaneously.

Full list of artists who performed at Rock in Rio Lisboa:

In Portugal, Rock in Rio Lisboa is broadcast by SIC Radical.