Storrington is a large village in the Horsham District of West Sussex, England, and one of two in the civil parish of Storrington and Sullington. Storrington lies at the foot of the north side of the South Downs. As of 2006 the village has a population of around 4,600.[1] It has one main shopping street (High Street). The A283 road runs directly through the village and connects Storrington to Steyning in the east and Pulborough in the west.

Storrington is listed in the Domesday Book as "Estorchestone", meaning a place well known for storks. A charter to hold a regular market on Wednesdays was granted by Henry IV in 1400, together with permissions for three fairs during the year, on Mayday, Wednesday of Whit week and the Feast of Martin on 11 November.[2] Tanning and blacksmithing were also important industries and only in the 20th century did these roles fade away. Rabbit breeding was another significant industry reflected in a number of local place names including 'The Warren', 'Warren Hill', 'Sullington Warren' and 'Warren Croft'. This working/small industry background has however, left little behind architecturally. Nikolaus Pevsner, noted only the small door in Browns Lane, the church, and the Dominican convent known as the Abbey to be historically significant.

Since 1945 Storrington has expanded with a variety of housing projects which enlarged the village. It is possible to be in open countryside in a few minutes from the town centre when walking towards the downs or one of the commons.

The nearest large town is Worthing, approximately 10 mi (16 km) to the south, followed by Horsham, approximately 13 mi (21 km) to the north. Mainline train services are from Pulborough or Amberley. Trains to London take an hour and a quarter and terminate at Victoria. Trains to Gatwick Airport take about 25 minutes.

From the village centre there is walking access to the 100-mile-long trail, the South Downs Way. From Chantry Hill or Kithurst Hill there are views across the English Channel to the south and opposite, to the North Downs. On a clear day you can see the Isle of Wight.

Kithurst Hill which rises steeply above the village is marked at the summit by a trig point, 699 feet (213m) above sea level. 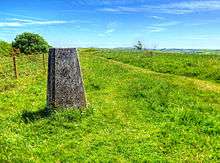 Storrington is thinly disguised as the home of the home team in Hugh de Selincourt's cricket novel The Cricket Match, complete with chestnut trees and duck pond. In later editions a cartoon map of the village is used as end pages. John Parker wrote effectively a sequel in "The Village Cricket Match" in 1977.

St Joseph's Hall in Greyfriars Lane is a Grade II listed [3] former residence of the Bishop of Arundel and Brighton. It was built as a private house for US businessman George Trotter in 1910, and then sold to a French religious order, the Norbertines. In 1956 it was used by Vincent and Nona Byrne as a home for refugees from the Hungarian uprising.[4]

Parham Park, towards Pulborough, is a country house with rolling parkland with a large herd of maintained deer. It is open most weekends to visitors. There is also the private Edwin Lutyens built Little Thakeham nearby.[5]

Places of worship include St Mary's on Church Street, which is the main Church of England place of worship, and the Priory of Our Lady of England on Monastery Lane, which is the Roman Catholic parish church of Storrington. The Roman Catholic bishops of Arundel lived nearby for a while. Other Christian denominations have places as well, including the Methodists and Jehovah's Witnesses.

Storrington is twinned with the commune of Villerest in the Loire department of central France.[6]