A strigoi as shown on Lost Tapes on Animal Planet

In Romanian mythology, strigoi (English: striga, poltergeist)[1] are the troubled spirits of the dead rising from the grave. Some strigoi can be living people with certain magical properties. Some of the properties of the strigoi include: the ability to transform into an animal, invisibility, and the propensity to drain the vitality of victims via blood loss. Strigoi are also known as vampires.

The word is generally thought to originate in the Ancient Greco-Roman concept of the strix (Late Latin striga, Greek στρίγξ), which denoted either a witch or a type of ill-omened nocturnal flying creature[2] or a hybrid of the two that was said to crave human flesh and blood, particularly of infants.[3]

The Croatian Jure Grando, who died in 1656, is often considered the first alleged vampire whose existence is documented.[4] In the earliest published description of the Grando case (in German), from Valvasor's The Glory of the Duchy of Carniola (1689), the local term was given as strigon.

Dimitrie Cantemir mentions the striga as being a Moldavian and especially Transylvanian belief in his Descriptio Moldaviae (1714–1716), though his version corresponds more closely to the classical notion of a witch or sorceress than a blood-drinking vampire and includes a very typical description of dunking as a test for witchcraft.

Strigoiulu (the Strigoi) was the name of a Romanian-language satirical magazine published briefly in 1862 in Pest.[5]

The modern form, strigoi, is cited in an 1865 article on Transylvanian folklore by Wilhelm Schmidt, who describes them as plaguing infants. He reports a tradition in which, upon the birth of a child, one tosses a stone behind oneself and exclaims "this into the mouth of the strigoi!"[6]

In 1909, Franz Hartmann mentions in his book An Authenticated Vampire Story that peasant children from a village in the Carpathian Mountains started to die mysteriously. The villagers began to suspect a recently deceased count was a vampire, dwelling in his old fortress. Frightened villagers burned the castle to stop the deaths.[7]

In his book In Search of Dracula, The History of Dracula and Vampires, Radu Florescu mentions an event in 1969 in the city of Căpăţâneni, where after the death of an old man, several family members began to die in suspicious circumstances. Unearthed, the corpse did not show signs of decomposition, his eyes were wide open, the face was red and twisted in the coffin. The corpse was burned to save his soul.[8]

In 1970, a series of hideous crimes shocked Bucharest. The attacks took place at midnight during rainstorms. The victims were usually waitresses returning home from work. In 1971, Ion Rîmaru was arrested and identified by teeth marks on the corpses. During the trial he was in a state of continual drowsiness. He was interrogated at night because he was not lucid at any other time. During daylight hours, Rîmaru was intractably lethargic. Sentenced to death, Rîmaru became violently agitated. Several policemen were needed to restrain him. After the execution, Rîmaru's father died in a suspicious accident. During the investigation of the accident, it was discovered that the father's fingerprints matched those of a serial killer active in 1944 whose crimes looked remarkably similar to those of Ion Rîmaru. The similarities included the weather conditions and similar or identical names of some of the victims. It was rumored that the accident was engineered by the Securitate, who decided to eliminate the dangerous individual.[9]

During the Romanian Revolution of 1989, the corpse of Nicolae Ceaușescu did not receive a proper burial. This made the ghost of the former dictator a threat in the minds of superstitious Romanians. Noted revolutionary Gelu Voican carpeted the apartment of the Conducător with braids of garlic. This is a traditional remedy against the strigoi.[10]

Before Christmas 2003, in the village of Marotinu de Sus, a 76-year-old Romanian man named Petre Toma died. In February 2004, a niece of the deceased revealed that she had been visited by her late uncle. Gheorghe Marinescu, a brother-in-law, became the leader of a vampire hunting group made up of several family members. After drinking some alcohol, they dug up the coffin of Petre Toma, made an incision in his chest, and tore the heart out. After removal of the heart, the body was burned and the ashes mixed in water and drunk by the family, as is customary. However, the Romanian government anxious to maintain a good image in preparation for the country's accession to the European Union had banned this practice, and six family members were arrested by the police of Craiova from Dolj County for "disturbing the peace of the dead",[11] and were imprisoned and sentenced to pay damages to the family of the deceased. Since then, in the nearby village of Amărăştii de Sus, people drive a fire-hardened stake through the heart or belly of the dead as a "preventative".[12]

Update: The six who exhumed the body were charged and sentenced to six months time served.[13]

The name strigoi is related to the Romanian verb a striga, which in Romanian means "to scream". Virtually all authorities derive it directly from the Latin terms strix and striga,[14] the root of which relates particularly to owls and commonly appears in related taxonomic terms for them as well as for blood parasites such as the Strigeidida. Cognates are found throughout the Romance languages, such as the Italian word strega or the Venetian word strìga which mean "witch". In French, stryge means a bird-woman who sucks the blood of children. Jules Verne used the term "stryges" in Chapter II of his novel The Castle of the Carpathians, published in 1892. The Greek word Strigx and the Albanian word shtriga are also cognate.

Tudor Pamfile in his book Mitologie românească compiles all appellations of strigoi in Romania strâgoi, Moroi[15][16] in western Transylvania, Wallachia and Oltenia, vidmă[17] in Bucovina, vârcolacul, Cel-rau, or vampire.

A strigoaică (singular feminine form) is a witch.[18]

The strigoi viu (living strigoi) is a kind of sorcerer. According to Adrian Cremene, in his book Mythology of the vampire in Romania, the living strigoi steals the wealth of farmers, that is to say, wheat and milk. But it can also stop the rain, drop hail and give death to men and cattle.

The strigoi mort (dead strigoi) is much more dangerous. Its nature is ambiguous, both human and demonic. He emerges from his grave, returns to his family and behaves as in his lifetime, while weakening his relatives until they die in their turn.

The encyclopedist Dimitrie Cantemir and the folklorist Teodor Burada in his book Datinile Poporului român la înmormântări published in 1882 refer to cases of strigoism. The strigoi can be a living man, born under certain conditions:

According to Ionna Andreesco, in his book Where are the vampires? published in 1997, children born with a caul atop their head will become strigoi to their death. 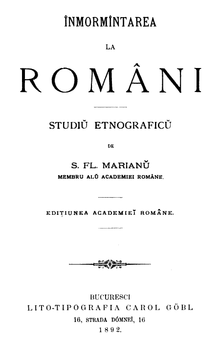 In 1887, French geographer Élisée Reclus details the burials in Romania: "if the deceased has red hair, he is very concerned that he was back in the form of dog, frog, flea or bedbug, and that it enters into houses at night to suck the blood of beautiful young girls. So it is prudent to nail the coffin heavily, or, better yet, a stake through the chest of the corpse. "[19]

Simeon Florea Marian in Înmormântarea la români (1892) describes another preventive method, unearthing and beheading then re-interring the corpse and head face down.

The Dracula Scrapbook by Peter Haining, published by New English Library editions in 1976, reported that the meat of pig killed on the day of St. Ignatius is a good way to guard against vampire, according to Romanian legend.[20]

There is a known method used by gypsies to get rid of a strigoi as explained on the show Lost Tapes:

(The Christians that are awake, with fear they call / The Mother of Christ and-light rushed / Incense and garlic on a bronze vessel / She's single in the lodge, poor mother / image sits stunned...)