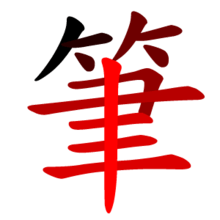 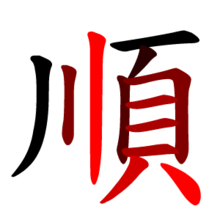 Stroke order (simplified Chinese: 笔顺; traditional Chinese: 筆順; pinyin: bǐshùn; Yale: bāt seuhn; Japanese: 筆順 hitsujun or 書き順 kaki-jun; Korean: 필순 筆順 pilsun or 획순 畫順 hoeksun; Vietnamese: bút thuận 筆順) refers to the order in which the strokes of a Chinese character (or Chinese derivative character) are written. A stroke is a movement of a writing instrument on a writing surface. Chinese characters are used in various forms in Chinese, Japanese, Korean, and in Vietnamese. They are known as Hanzi in Chinese, kanji in Japanese, Hanja in Korean, and Hán tự in Vietnamese.

Chinese characters are basically logograms constructed with strokes. Over the millennia a set of generally agreed rules have been developed by custom. Minor variations exist between countries, but the basic principles remain the same, namely that writing characters should be economical, with the fewest hand movements to write the most strokes possible. This promotes writing speed, accuracy, and readability. This idea is particularly important since as learners progress, characters often get more complex. Since stroke order also aids learning and memorization, students are often taught about it from a very early age in schools and encouraged to follow them.

In ancient China, the Jiǎgǔwén characters carved on ox scapula and tortoise plastrons showed no indication of stroke order. The characters show huge variations from piece to piece, sometimes even within one piece. During the divination ceremony, after the cracks were made, the characters were written with a brush on the shell or bone (to be carved in a workshop later). Although the brush-written stroke order is not discernible after carving, there exists some evidence that it was not entirely idiosyncratic: a few of the characters, often marginal administrative notations recording the provenance of the shells or bones, were not later recarved, and the stroke order of these characters tends to resemble traditional and modern stroke order.[1] For those characters (the vast majority) which were later engraved into the hard surface using a knife, perhaps by a separate individual, there is evidence (from incompletely engraved pieces) that in at least some cases all the strokes running one way were carved, then the piece was turned, and strokes running another way were then carved.[1]

In early Imperial China, the common script was the Xiaozhuan style. About 220 BC, the emperor Qin Shi Huang, the first to conquer all of China, imposed Li Si's character uniformisation, a set of 3300 standardized Xiǎozhuàn characters.[2] Its graphs on old steles — some dating from 200 BC — reveal indications of the stroke order of the time. However, stroke order could still not yet be ascertained from the steles, and no paper from that time is extant.

The true starting point of stroke order is the Lìshū style (clerical script) which is more regularized, and in some ways similar to modern text. In theory, by looking at the Lìshū style steles' graphs and the placement of each stroke, one can see hierarchical priority between the strokes, which indicates the stroke order used by the calligrapher or stele sculptors.

Cursive styles such as Xíngshū (semi-cursive or running script) and Cǎoshū (cursive or grass script) show stroke order more clearly than Regular Script, as each move made by the writing tool is visible.

Note: There are exceptions within and among different standards. The following are only guidelines.

1. Write from top to bottom, and left to right. 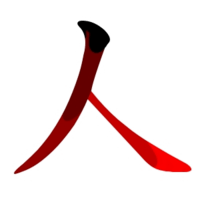 , Mandarin Chinese: rén, Cantonese Chinese: yàhn, Korean: in, Japanese: hito, nin; jin). The character has two strokes, the first shown here in dark, and the second in red. The black area represents the starting position of the writing instrument.

This rule also applies to the order of components. For example, 校 can be divided into two. The entire left side (木) is written before the right side (交). There are some exceptions to this rule, mainly occurring when the right side of a character has a lower enclosure (see below).

Vertical strokes that pass through many other strokes are written after the strokes through which they pass, as in 聿 and 弗.

Horizontal strokes that pass through many other strokes are written last, as in 毋 and 舟.

5. Center before outside in vertically symmetrical characters

Outside enclosing components are written before inside components; bottom strokes in the enclosure are written last if present, as in 日 and 口. (A common mnemonic is "Put people inside first, then close the door.") Enclosures may also have no bottom stroke, as in 同 and 月.

Minor strokes are usually written last, as the small "dot" in the following: 玉, 求, 朮.

There are various ways to describe the stroke order of a character. Children learn the stroke order in courses, as part of writing learning. Various graphical representations are possible, most notably successive images of the character with one more stroke added (or changing color) each time, numbering strokes, color-coding, fanning,[4] and more recently animations. Stroke order is often described in person by writing characters on paper or in the air.