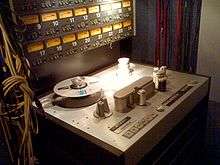 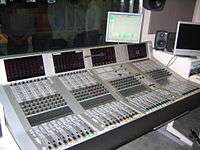 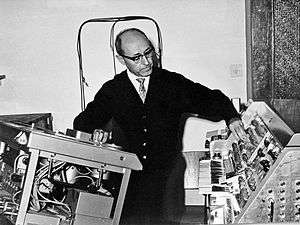 Israeli composer Josef Tal at the Electronic Music Studio in Jerusalem (c. 1965). On the right a sound synthesizer, on the left a Studer C37 vacuum tube reel-to-reel tape recorder

Studer is a designer and manufacturer of advanced audio equipment for recording studios and broadcasters. The company was founded in Zürich, Switzerland in 1948 by Dr. Willi Studer. It initially became famous in the 1950s for its professional tape recorders. In the 1990s the company moved into the mixing console business.

Management, sales, engineering, R&D and customer service are based in Regensdorf, Switzerland while manufacturing and marketing are part of the Soundcraft facility in Potters Bar, England. Studer is now a subsidiary of Harman International Industries.

Dr. Studer started in 1948 making high-tension oscilloscopes. These products were in production until 1968. In March 1951 Studer introduced the Revox brand name subsidiary.

The extensive reorganization culminated in the sale of the Studer group to Harman International Industries in March 1994. The Revox group was excluded and sold to private investors. On March 17, 1994 Harman completed its acquisition and acquired from Motor-Columbus AG 100% of Studer-Revox AG.

In 1949 Studer branched out into the audio business by modifying imported tape recorders from the United States. By 1950 they had developed their own line of tape recorders, named the Dynavox series.

Studer's analog tape recorders were widely considered to be among the best in the world by audio engineers due to their excellent reliability and sound quality. The company has built a variety of 2-track recorder models throughout its history for stereo recording.

Several Studer components were sold under the Revox name, with slight modifications, at a lower price. The Revox variants were designed for consumer use, with features such as IR remote control, and the omission of balanced input/output sockets. The core circuitry of the two was otherwise substantially identical. One of the company's most successful models was the Revox A77 recorder, which was introduced in 1967. It sold over 400,000 units.

Studer was also an innovator in the design and production of multitrack recorders. Studer’s first multi-track machine, the model J37, was released in 1964. It recorded 4 tracks on one inch tape. The machine was a true technological breakthrough, embodying versatility, functionality and simplicity in what was then a state-of-the-art machine. A pair of J37s were used by The Beatles to record Sgt. Pepper's Lonely Hearts Club Band in 1967.[1] Later analog Studer machines were built in 8, 16, and 24-track configurations using tape widths of up to two inches.

Sales of analog machines continued to be strong into the early 1990s when they began to be replaced by digital recorders. in this period Studer introduced the D820 and D827 multitrack models, which employed the Digital Audio Stationary Head standard. However, digital tape formats eventually fell from favor with the introduction of computerized hard disk drive systems such as Pro Tools.

In the mid 1990s Studer started to develop digital mixing consoles. After introduction of OnAir 2000 with Touch'n Action user interface in 1997, the D950 was the first digital large frame desk Studer introduced in 1998. With Vista Series (Vista 5, 6, 7, 8 and 9) Studer launched in 2003 the Vistonics user interface with knobs-on-glass technology. Vista X is the latest model of this series introducing x86 CPU technology replacing SHARC based DSP engines.

The Studer Vista 9M2 (launched September 2013) is a TV broadcast/live production console equipped with the patented Vistonics knobs-on-glass user interface and FaderGlow is used by TV broadcasters including the BBC, RAI, France TV, TV Globo, ABC, NRK, DR and many others. Studer also offers radio broadcast consoles with the OnAir range including the OnAir 3000, 2500 and 1500.