An extended version of a suanpan 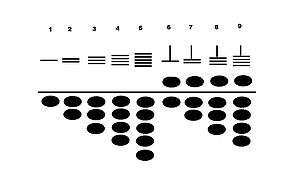 The Suan Pan (simplified Chinese: 算盘; traditional Chinese: 算盤; pinyin: suànpán, suanpan or souanpan[1][2]) is an abacus of Chinese origin first described in a 190 CE book of the Eastern Han Dynasty, namely Supplementary Notes on the Art of Figures written by Xu Yue. However, the exact design of this suanpan is not known.[3] Usually, a suanpan is about 20 cm (8 in) tall and it comes in various widths depending on the application. It usually has more than seven rods. There are two beads on each rod in the upper deck and five beads on each rod in the bottom deck. This configuration is used for both decimal and hexadecimal computation. The beads are usually rounded and made of a hardwood. The beads are counted by moving them up or down towards the beam. The suanpan can be reset to the starting position instantly by a quick jerk around the horizontal axis to spin all the beads away from the horizontal beam at the center.

Suanpans can be used for functions other than counting. Unlike the simple counting board used in elementary schools, very efficient suanpan techniques have been developed to do multiplication, division, addition, subtraction, square root and cube root operations at high speed.

The modern suanpan has 4+1 beads, colored beads to indicate position and a clear-all button. When the clear-all button is pressed, two mechanical levers push the top row beads to the top position and the bottom row beads to the bottom position, thus clearing all numbers to zero. This replaces clearing the beads by hand, or quickly rotating the suanpan around its horizontal center line to clear the beads by centrifugal force. 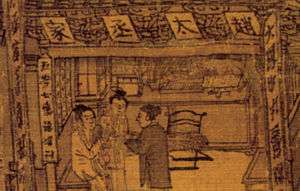 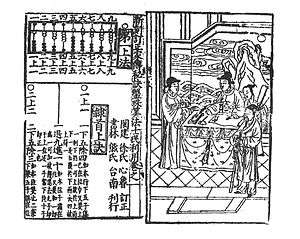 The long scroll Along the River During Qing Ming Festival painted by Zhang Zeduan (1085–1145) during the Song Dynasty (960-1279) might contain a suanpan beside an account book and doctor's prescriptions on the counter of an apothecary). However, the identification of the object as an abacus is a matter of some debate.[4]

A 5+1 suanpan appeared in Ming dynasty, an illustration in a 1573 book on suanpan showed a suanpan with one bead on top and five beads at the bottom.

The evident similarity of the Roman abacus to the Chinese one suggests that one must have inspired the other, as there is strong evidence of a trade relationship between the Roman Empire and China. However, no direct connection can be demonstrated, and the similarity of the abaci could be coincidental, both ultimately arising from counting with five fingers per hand. Where the Roman model and Chinese model (like most modern Japanese) has 4 plus 1 bead per decimal place, the old version of the Chinese suanpan has 5 plus 2, allowing less challenging arithmetic algorithms, and also allowing use with a hexadecimal numeral system. Instead of running on wires as in the Chinese and Japanese models, the beads of Roman model run in grooves, presumably more reliable since the wires could be bent.

Another possible source of the suanpan is Chinese counting rods, which operated with a place value decimal system with empty spot as zero.

The suanpan is a 2:5 abacus: two heaven beads and five earth beads. If one compares the suanpan to the soroban which is a 1:4 abacus, one might think there are two "extra" beads in each column. In fact, to represent decimal numbers and add or subtract such numbers, one strictly needs only one upper bead and four lower beads on each column. So these extra beads might be used to represent hexadecimal numbers on the suanpan and add or subtract them. Also, some "old" methods to multiply or divide decimal numbers use those extra beads like the "Extra Bead technique" or "Suspended Bead technique".[5]

At the end of a decimal calculation on a suanpan, it is never the case that all five beads in the lower deck are moved up; in this case, the five beads are pushed back down and one carry bead in the top deck takes their place. Similarly, if two beads in the top deck are pushed down, they are pushed back up, and one carry bead in the lower deck of the next column to the left is moved up. In hexadecimal calculation, all seven beads on each column are used. The result of the computation is read off from the beads clustered near the separator beam between the upper and lower deck.

There exist different methods to perform division on the suanpan. Some of them require the use of the so-called "Chinese division table".[6]

The two most extreme beads, the bottommost earth bead and the topmost heaven bead, are usually not used in addition and subtraction. They are essential (compulsory) in some of the multiplication methods (two of three methods require them) and division method (special division table, Qiuchu 九歸, one amongst three methods). When the intermediate result (in multiplication and division) is larger than 15 (fifteen), the lowest of the upper beads is moved halfway to represent ten (xuanchu, suspended). Thus the same rod can represent up to 19 (compulsory as intermediate steps in tradition suanpan multiplication and division).

The mnemonics/readings of the Chinese division method [Qiuchu] has its origin in the use of bamboo sticks [Chousuan], which is one of the reasons that many believe the evolution of suanpan is independent of the Roman abacus.

This Chinese division method (i.e. with division table) was not in use when the Japanese changed their abacus to one upper bead and four lower beads in about the 1920s.

The beads and rods are often lubricated to ensure quick, smooth motion.

This device works as a bi-quinary based number system in which carries and shifting are similar to the decimal number system. Since each rod represents a digit in a decimal number, the computation capacity of the suanpan is only limited by the number of rods on the suanpan. When a mathematician runs out of rods, another suanpan can be added to the left of the first. In theory, the suanpan can be expanded indefinitely in this way.

Traditional Chinese weighing units was a hexadecimal system. One jin (斤) equals sixteen liang (兩). Suanpans were commonly used in market places to perform calculations with these hexadecimal units. When all the beads in the suanpan are used, each column can be used to represent numbers between 0 and 15 (0 and F in modern hexadecimal notation). Computation in decimal and hexadecimal is quite similar except one extra bead from each the upper and lower deck is used.

Suanpan arithmetic was still being taught in school in Hong Kong as recently as the late 1960s, and in China into the 1990s. However, when hand held calculators became readily available, school children's willingness to learn the use of the suanpan decreased dramatically. In the early days of hand held calculators, news of suanpan operators beating electronic calculators in arithmetic competitions in both speed and accuracy often appeared in the media. Early electronic calculators could only handle 8 to 10 significant digits, whereas suanpans can be built to virtually limitless precision. But when the functionality of calculators improved beyond simple arithmetic operations, most people realized that the suanpan could never compute higher functions – such as those in trigonometry – faster than a calculator. Nowadays, as calculators have become more affordable, suanpans are not commonly used in China, but many parents still send their children to private tutors or school- and government- sponsored after school activities to learn bead arithmetic as a learning aid and a stepping stone to faster and more accurate mental arithmetic, or as a matter of cultural preservation. Speed competitions are still held. Suanpans are still being used elsewhere in China and in Japan, as well as in some few places in Canada and the United States.

In mainland China, formerly accountants and financial personnel had to pass certain graded examinations in bead arithmetic before they were qualified. Starting from about 2002 or 2004, this requirement has been entirely replaced by computer accounting.