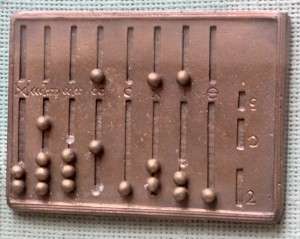 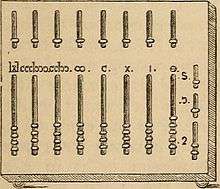 The Ancient Romans developed the Roman hand abacus, a portable, but less capable, base-10 version of the previous Babylonian abacus. It was the first portable calculating device for engineers, merchants and presumably tax collectors. It greatly reduced the time needed to perform the basic operations of arithmetic using Roman numerals.

As Karl Menninger says on page 315 of his book,[1] "For more extensive and complicated calculations, such as those involved in Roman land surveys, there was, in addition to the hand abacus, a true reckoning board with unattached counters or pebbles. The Etruscan cameo and the Greek predecessors, such as the Salamis Tablet and the Darius Vase, give us a good idea of what it must have been like, although no actual specimens of the true Roman counting board are known to be extant. But language, the most reliable and conservative guardian of a past culture, has come to our rescue once more. Above all, it has preserved the fact of the unattached counters so faithfully that we can discern this more clearly than if we possessed an actual counting board. What the Greeks called psephoi, the Romans called calculi. The Latin word calx means 'pebble' or 'gravel stone'; calculi are thus little stones (used as counters)."

Both the Roman abacus and the Chinese suanpan have been used since ancient times. With one bead above and four below the bar, the systematic configuration of the Roman abacus is coincident to the modern Japanese soroban, although the soroban is historically derived from the suanpan.

The Late Roman hand abacus shown here as a reconstruction contains seven longer and seven shorter grooves used for whole number counting, the former having up to four beads in each, and the latter having just one. The rightmost two grooves were for fractional counting. The abacus was made of a metal plate where the beads ran in slots. The size was such that it could fit in a modern shirt pocket.

The lower groove marked I indicates units, X tens, and so on up to millions. The beads in the upper shorter grooves denote fives—five units, five tens, etc., essentially in a bi-quinary coded decimal place value system.

Computations are made by means of beads which would probably have been slid up and down the grooves to indicate the value of each column.

The upper slots contained a single bead while the lower slots contained four beads, the only exceptions being the two rightmost columns, column 2 marked Ө and column 3 with three symbols down the side of a single slot or beside three separate slots with Ɛ, 3 or S or a symbol like the £ sign but without the horizontal bar beside the top slot, a backwards C beside the middle slot and a 2 symbol beside the bottom slot, depending on the example abacus and the source which could be Friedlein,[2] Menninger[1] or Ifrah.[3] These latter two slots are for mixed-base math, a development unique to the Roman hand abacus[4] described in following sections.

The longer slot with five beads below the Ө position allowed for the counting of 1/12 of a whole unit called an uncia (from which the English words inch and ounce are derived), making the abacus useful for Roman measures and Roman currency. The first column was either a single slot with 4 beads or 3 slots with one, one and two beads respectively top to bottom. In either case, three symbols were included beside the single slot version or one symbol per slot for the three slot version. Many measures were aggregated by twelfths. Thus the Roman pound ('libra'), consisted of 12 ounces (unciae) (1 uncia = 28 grams). A measure of volume, congius, consisted of 12 heminae (1 hemina = 0.273 litres). The Roman foot (pes), was 12 inches (unciae) (1 uncia = 2.43 cm). The actus, the standard furrow length when plowing, was 120 pedes. There were however other measures in common use - for example the sextarius was two heminae.

The as, the principal copper coin in Roman currency, was also divided into 12 unciae. Again, the abacus was ideally suited for counting currency.

The first column was arranged either as a single slot with three different symbols or as three separate slots with one, one and two beads or counters respectively and a distinct symbol for each slot. It is most likely that the rightmost slot or slots were used to enumerate fractions of an uncia and these were, from top to bottom, 1/2 s, 1/4 s and 1/12 s of an uncia. The upper character in this slot (or the top slot where the rightmost column is three separate slots) is the character most closely resembling that used to denote a semuncia or 1/24. The name semuncia denotes 1/2 of an uncia or 1/24 of the base unit, the As. Likewise, the next character is that used to indicate a sicilicus or 1/48 of an As, which is 1/4 of an uncia. These two characters are to be found in the table of Roman fractions on page 75 of Graham Flegg's[5] book. Finally, the last or lower character is most similar but not identical to the character in Flegg's table to denote 1/144 of an As, the dimidio sextula, which is the same as 1/12 of an uncia.

This is however even more strongly supported by Gottfried Friedlein[2] in the table at the end of the book which summarizes the use of a very extensive set of alternative formats for different values including that of fractions. In the entry in this table numbered 14 referring back to (Zu) 48, he lists different symbols for the semuncia (1/24), the sicilicus (1/48), the sextula (1/72), the dimidia sextula (1/144), and the scriptulum (1/288). Of prime importance, he specifically notes the formats of the semuncia, sicilicus and sextula as used on the Roman bronze abacus, "auf dem chernan abacus". The semuncia is the symbol resembling a capital "S", but he also includes the symbol that resembles a numeral three with horizontal line at the top, the whole rotated 180 degrees. It is these two symbols that appear on samples of abacus in different museums. The symbol for the sicilicus is that found on the abacus and resembles a large right single quotation mark spanning the entire line height.

This results in two opposing interpretations of this slot, that of Friedlein and that of many other experts such as Ifrah,[3] and Menninger[1] who propose the one and two thirds usage.

Inference of zero and negative numbers

When using a counting board or abacus the rows or columns often represent nothing, or zero. Since the Romans used Roman numerals to record results, and since Roman numerals were all positive, there was no need for a zero notation. But the Romans clearly knew the concept of zero occurring in any place value, row or column.

It may be also possible to infer that they were familiar with the concept of a negative number as Roman merchants needed to understand and manipulate liabilities against assets and loans versus investments.