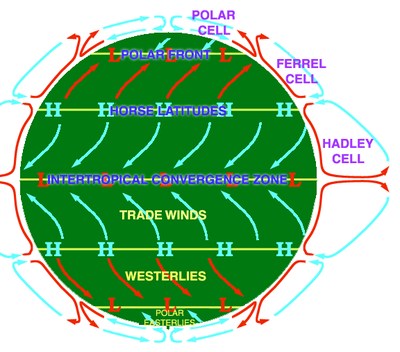 A diagram showing the relative positions of the subtropical ridge. Where it normally lies winds are nearly calm, and locations under its normal location are known as lying in the horse latitudes.

The subtropical ridge, also known as the subtropical high or horse latitudes, is a significant belt of atmospheric high pressure situated around the latitudes of 30°N in the Northern Hemisphere and 30°S in the Southern Hemisphere. It is characterized by mostly calm winds, which act to reduce air quality under its axis by causing fog overnight, and haze during daylight hours caused by the stable atmosphere found near its location. Air flows out from its center toward the upper and lower latitudes of each hemisphere, creating both the trade winds and the westerlies. The subtropical ridge moves poleward during the summer, reaching its most northern latitude in early fall, before moving equatorward during the cold season. The ENSO climate cycle can displace the northern hemisphere subtropical ridge, with La Niñas allowing for a more northerly axis for the ridge, while El Niños show flatter, more southerly ridges. The change of the ridge position during ENSO cycles changes tracks of tropical cyclones that form around their equatorward and western peripheries. As the subtropical ridge varies in position and strength, it can enhance or depress monsoon regimes around their low-latitude periphery. The term "horse latitudes" refers to and is synonymous with the subtropical ridge or subtropical high.

Heating of the earth near the equator leads to large amounts of upward motion and convection along the monsoon trough or Intertropical convergence zone. These rising air currents diverge in the upper troposphere and move away from the equator at high altitude in both northerly and southerly directions. As it moves towards the mid-latitudes on both sides of the equator, the air cools and sinks. The resulting air mass subsidence creates a subtropical ridge near the 30th parallel of latitude in both hemispheres where the formation of cloud is minimal except on the anticyclone’s western edge (eastern coast of continents) where warm and moist low-level air is driven poleward and cooled to create thunderstorms[1] – producing the humid subtropical climates of the American South, South China, southern Japan. central-eastern South America, southern Queensland and KwaZulu Natal province in South Africa. At surface level, the sinking air diverges again with some moving back to the equator and completing the vertical cycle. This circulation on each side of the equator is known as the Hadley cell and leads to the formation of the subtropical ridge.[2] Many of the world's deserts are caused by these climatological high-pressure areas. This is how the subtropical high pressure belts are formed.

The subtropical ridge shows up as a large area of black (dryness) on this water vapor satellite image from September 2000.

When the Atlantic Multidecadal Oscillation's mode is favorable to tropical cyclone development (1995–present), it amplifies the subtropical ridge across the central and eastern Atlantic.[6]

Role in haze and fog formation

When surface winds become light, the subsidence produced directly under the subtropical ridge can lead to a buildup of particulates in urban areas under the ridge, leading to widespread haze.[10] If the low level relative humidity rises towards 100 percent overnight, fog can form.[11]