In mathematics, the superquadrics or super-quadrics (also superquadratics) are a family of geometric shapes defined by formulas that resemble those of ellipsoids and other quadrics, except that the squaring operations are replaced by arbitrary powers. They can be seen as the three-dimensional relatives of the Lamé curves ("Superellipses").

The superquadrics include many shapes that resemble cubes, octahedra, cylinders, lozenges and spindles, with rounded or sharp corners. Because of their flexibility and relative simplicity, they are popular geometric modeling tools, especially in computer graphics.

The basic superquadric has the formula

where r, s, and t are positive real numbers that determine the main features of the superquadric. Namely:

Each exponent can be varied independently to obtain combined shapes. For example, if r=s=2, and t=4, one obtains a solid of revolution which resembles an ellipsoid with round cross-section but flattened ends. This formula is a special case of the superellipsoid's formula if (and only if) r = s.

If any exponent is allowed to be negative, the shape extends to infinity. Such shapes are sometimes called super-hyperboloids.

The basic shape above spans from -1 to +1 along each coordinate axis. The general superquadric is the result of scaling this basic shape by different amounts A, B, C along each axis. Its general equation is 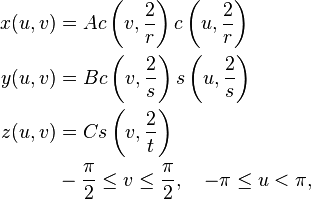 where the auxiliary functions are

The following GNU Octave code generates a mesh approximation of a superquadric:

This article is issued from Wikipedia - version of the 4/18/2015. The text is available under the Creative Commons Attribution/Share Alike but additional terms may apply for the media files.