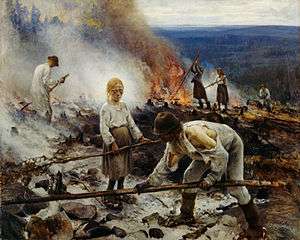 Burning the Brushwood, 1893. By Eero Järnefelt, now in the Finnish National Gallery

Svedjebruk is a Swedish term for slash-and-burn agriculture that is derived from the Old Norse word sviða which means "to burn". This practice originated in Russia in the region of Novgorod and was widespread in Finland and Eastern Sweden during the Medieval period. It spread to western Sweden in the 16th Century when Finnish settlers were encouraged to migrate there by King Gustav Vasa to help clear the dense forests. Later, when the Finns were persecuted by the local Swedes, svedjebruk farming was spread by refugees to Eastern Norway in the Eastern part of Solør, in the area bordering Sweden known as Finnskogen ("the Finnish woods").

The practice also spread to New Sweden in North America. Reinforced by the use of fire in agriculture and hunting by Native Americans, it became an important part of pioneering in America (Pyne, 1997:470).

Svedjebruk involved stripping a ring of bark completely around the trunk of coniferous trees like pine or spruce or felling them, allowing them to dry, setting fire to the dried forest and growing crops on the fertile ash-covered soil. The resulting ash was highly fertile, but only for a short period. The clearing was initially planted to rye as soon as the ash had fully settled and sufficiently cooled. When the rain came, it packed the ash around the rye. The rye germinated & grew prolifically, with anywhere from 25 to 100 stalks (or straws), each with multiple grains.

Only two tools were required, the axe and the sickle. The axe cut the trees to start the cycle. When the rye had ripened, it was harvested with a sickle, which could reach among the rocks and stumps where a scythe would have been ineffective.

In the second and third year the field would be sown with turnips or cabbages. It then might be grazed for several years before being allowed to return to woodland.

Svedjebruk required felling new forest and burning a new area every year. It was necessary allow the former fields to regrow with forest for 10–30 years before repeating the cycle. As a result, the dwellings were often many kilometers from the fields. Further, since the process was man-power intensive, extended families tended to work together and live in compact communities.

The svedjebruk farming approach requires a large area. When forest was plentiful, the Finns were very prosperous. As population grew and restrictions were placed on the forest which could be burned, it became increasingly difficult. By 1710, during the conflict with Sweden, because of their suspect loyalties Norwegian authorities considered expelling them from the border area but did not do so because it was judged they were too poor to survive if evicted.