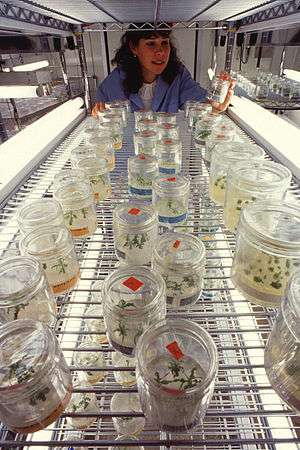 A genetically modified tree (GMt, GM tree, genetically engineered tree, GE tree or transgenic tree) is a tree whose DNA has been modified using genetic engineering techniques. In most cases the aim is to introduce a novel trait to the plant which does not occur naturally within the species. Examples include resistance to certain pests, diseases, environmental conditions, and herbicide tolerance, or the alteration of lignin levels in order to reduce pulping costs.

Genetically modified forest trees are not yet approved ("deregulated") for commercial use, with the exception of insect-resistant poplar trees in China.[1][2] and one case of GM Eucalyptus in Brazil.[3] Several genetically modified forest tree species are undergoing field trials for deregulation, and much of the research is being carried out by the pulp and paper industry, primarily with the intention of increasing the productivity of existing tree stock.[4] Certain genetically modified orchard tree species have been deregulated for commercial use in the United States including the papaya and plum.[5] The development, testing and use of GM trees remains at an early stage in comparison to GM crops.[6]

The Conference of the Parties, Recognising the uncertainties related to the potential environmental and socio-economic impacts, including long term and trans-boundary impacts, of genetically modified trees on global forest biological diversity, as well as on the livelihoods of indigenous and local communities, and given the absence of reliable data and of capacity in some countries to undertake risk assessments and to evaluate those potential impacts, recommends parties to take a precautionary approach when addressing the issue of genetically modified trees.[8]

A precondition for further commercialization of GM forest trees is likely to be their complete sterility.[6][9] Plantation trees remain phenotypically similar to their wild cousins in that most are the product of no more than three generations of artificial selection, therefore, the risk of transgene escape by pollination with compatible wild species is high.[10] One of the most credible science-based concerns with GM trees is their potential for wide dispersal of seed and pollen.[11] The fact that pine pollen travels long distances is well established, moving up to 3,000 kilometers from its source.[12] Additionally, many tree species reproduce for a long time before being harvested.[13] In combination these factors have led some to believe that GM trees are worthy of special environmental considerations over GM crops.[14] Ensuring sterility for GM trees has proven elusive, but efforts are being made.[15] While tree geneticist Steve Strauss predicted that complete containment might be possible by 2020, many questions remain.[16]

GM trees under experimental development have been modified with traits intended to provide benefit to industry, foresters or consumers. Due to high regulatory and research costs, the majority of genetically modified trees in silviculture consist of plantation trees, such as eucalyptus, poplar, and pine.[17]

Several companies in the pulp and paper industry are interested in utilizing GM technology to alter the lignin content of plantation trees. It is estimated that reducing lignin in plantation trees by genetic modification could reduce pulping costs by up to $15 per cubic metre.[18] Lignin removal from wood fibres conventionally relies on costly and environmentally hazardous chemicals.[19] By developing low-lignin GM trees it is hoped that pulping and bleaching processes will require fewer inputs,[20] therefore, mills supplied by low-lignin GM trees may have a reduced impact on their surrounding ecosystems and communities.[21] However, it is argued that reductions in lignin may compromise the structural integrity of the plant, thereby making it more susceptible to pathogens and disease,[22] which could necessitate pesticide use exceeding that on traditional plantations.[23]

Genetic modification can allow trees to cope with abiotic stresses such that their geographic range is broadened.[24] Freeze-tolerant GM eucalyptus trees for use in southern US plantations are currently being tested in open air sites with such an objective in mind.[25] ArborGen, a tree biotechnology company and joint venture of pulp and paper firms Rubicon (New Zealand), MeadWestvaco (US) and International Paper (US)[26] is leading this research.[27] Until now the cultivation of eucalyptus has only been possible on the southern tip of Florida, freeze-tolerance would substantially extend the cultivation range northwards.[28]

In Brazil, field trials of fast growing GM eucalyptus are currently underway, they are set to conclude in 2015-2016 with commercialization to result.[29] FuturaGene, a biotechnology company owned by Suzano, a Brazilian pulp and paper company, has been leading this research. Stanley Hirsch, chief executive of FuturaGene has stated: "Our trees grow faster and thicker. We are ahead of everyone. We have shown we can increase the yields and growth rates of trees more than anything grown by traditional breeding."[30] The company is looking to reduce harvest cycles from 7 to 5.5 years with 20-30% more mass than conventional eucalyptus.[30] There is concern that such objectives may further exacerbate the negative impacts of plantation forestry. Increased water and soil nutrient demand from faster growing species may lead to irrecoverable losses in site productivity and further impinge upon neighbouring communities and ecosystems.[31][32][33]

Ecologically motivated research into genetic modification is underway. There are ongoing schemes that aim to foster disease resistance in trees such as the American chestnut[34] (see Chestnut blight) and the English elm[35] (see Dutch elm disease) for the purpose of their reintroduction to the wild. Specific diseases have reduced the populations of these emblematic species to the extent that they are mostly lost in the wild. Genetic modification is being pursued concurrently with traditional breeding techniques in an attempt to endow these species with disease resistance.[36]

In 2002 China's State Forestry Administration approved GM poplar trees for commercial use.[37] Subsequently 1.4 million Bt (insecticide) producing GM poplars were planted in China. They were planted both for their wood and as part of China's 'Green Wall' project, which aims to impede desertification.[38] Reports indicate that the GM poplars have spread beyond the area of original planting [39] and that contamination of native poplars with the Bt gene is occurring.[40] There is concern with these developments, particularly because the pesticide producing trait may impart a positive selective advantage on the poplar, allowing it a high level of invasiveness.[41]