Swami Vijnanananda (28 October 1868 – 25 April 1938)[1] was born as Hariprasanna Chattopadhyaya in an upper-class family near Dakshineswar.[2] He was a direct disciple of Ramakrishna. He was an engineer and worked as the District Engineer in the erstwhile State of United Provinces, India. He was a great scholar of Sanskrit with expertise in religo-philosophical works, astronomy, civil engineering etc. He spent considerable time in Allahabad (Prayag) centre of Ramakrishna Math. He became the President of Ramakrishna Mission in 1937. It was under his presidency and direct supervision that the Ramakrishna Temple at Belur Math was constructed and consecrated.

Hariprasanna Chattopadhyaya was born on 28 October 1868, in a respectable family of Belgharia. He had, in all probability, first seen Ramakrishna on 15 September 1879 at Keshab Chandra Sen’s spiritual retreat at Belgharia. When studying in the first or second class of a High School, Hariprasanna saw Ramakrishna at Dewan Govinda Mukherji's house. It was on 18 February 1883 that Hariprasanna, then a student of the St. Xavier's College, went to Dakshineswar with his fellow students Sarat, later Saradananda (Sarat Maharaj), and Barada Pal. Ramakrishna showed great love and kindness towards Hariprasanna, which bound the latter indissolubly to the former.[3] Hariprasanna took Ramakrishna to be his Master. He however saw the Master only a few more times in his life as he was compelled to live at Bankipore in Bihar. Hariprasanna's guardians were not in favour of his meeting Ramakrishna. He stayed back in Dakshineswar one night upon request from the Master and later he divulged that on that night Sri Ramakrishna granted him special spiritual favours.[3] Vijnanananda later recalled: ‘As I approached the Master he asked me to stick out my tongue. When I did so, he drew a figure on it with his finger. My whole body began to tremble, and I felt an unspeakable bliss within.’[4] He was rebuked by his mother and elder sister for the transgression and could not go to see Ramakrishna for a long time, who sent Sarat to bring him along. Ramakrishna made him enter into a deep meditation and gave him intimate knowledge on various facets of spiritual lives.[3]

As a student Hariprasanna was very spirited and would be upset at the sight of any moral turpitude or social injustice.[3] After passing the First Arts examination from Calcutta, Hariprasanna went to Bankipore in Bihar. He graduated from Patna college and went to study Civil Engineering in Puna. During this time Sri Ramakrishna died and Hariprasanna had a vision of Ramakrishna on the night he died.[4] He completed his diploma in [[civil engineering{]] (Licentiate in Civil Engineering or L.C.E) from Poona College of Science. He did not appear for his final examination deliberately in order to help a poor but meritorious student to secure a job, as in those days only the first or second ranked students could get a Government job and Hariprasanna's classmates were of the opinion that he was to stand first or second. At that time Hariprasanna was financially dependent on his elder sister's husband.[4] The next year he passed the examination successfully and landed with a Government job.

He started his Government service as the district engineer of Ghazipur, Uttar Province. Later he worked in Etawah, Meerut, Bulandshahr and other places. When he was staying in Etawah, Swami Subodhananda stayed with him and from him Hariprasanna got the information about the financial distress of Alambazar Math and he contributed 60 rupees every month thereafter. Hariprasanna took up the job to save money for his mother's future and after enough money was secured for his mother's maintenance, he left the job to join the Alambazar monastery.[3]

In the year 1896, shortly before Swami Vivekananda returned from West Hariprasanna joined the Alambazar Math and there he took his monastic vows and came to be known as Swami Vijnanananda. One of my boys in training has been an executive engineer, in charge of a district. That means a very big position here [in India]. He gave it up like straw! wrote Swami Vivekananda in a letter to Sister Nivedita on 20 June 1897, in the context of Hariprasanna's renunciation.[4] Vijnanananda accompanied Vivekananda on his trip to Rajputana and elsewhere. In 1899 he started working in constructing the buildings in Belur Math. As a wandering monk he visited many places and came to Allahabad in 1900. Here a group of young students had started an organization called Brahmavadin club for which they solicited his help. Vijanananda made Allahabad his permanent place and he established a centre of Ramakrishna Mission. He found Ramakrishna Math in Muthiganj in 1908. He lived a life of great austerity, often cooking his own food and spending time in meditation.[3] In 1934, he was appointed as the Vice President of the Ramakrishna Math and Mission and in 1937, its president. During his last few years he travelled extensively and visited many centres of Ramakrishna Math, including those of Rangoon and Colombo. The main Ramakrishna temple in Belur was started in 1935 and in view of the deteriorating health condition of Vijanananda, it was planned to have the installation ceremony just after the completion of the main shrine. On 14 January 1938, Vijanananda performed the dedication of the temple and the consecration of the marble image of Sri Ramakrishna. He paid only one more visit to Belur, on the occasion of Sri Ramakrishna's birthday. He returned to Allahabad where he died on 25 April 1938.

There is a dormitory named, in his honour, Vijnanananda Dham in Ramakrishna Mission Vidyapith, Deoghar. 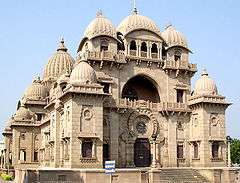 Swami Vijanananda constructed the major buildings of Belur Math, as well as the embankment on Ganga in front of the main temple. Swami Vivekananda entrusted him with the responsibility of planning a big memorial temple dedicated to the Master Ramakrishna]], giving him specific instructions. The Swami in consultation with a noted European architect of Calcutta, prepared a design of the proposed temple which was approved by Vivekananda. The temple was planned to have unifying features from all major religions - Church, Mosque and Temple. The plan got shelved after Vivekananda's death in 1902 owing to the paucity of funds. Thirty years after Vivekananda's death, the temple plan was revived when an unexpected financial help was received from some devoted American students. Foundation stone of the temple was laid by Vijanananda, then Vice President of Ramakrishna Math and Mission, in July 1935. The main shrine was opened in his presence in 1938. Hariprasanna Maharaj also established the Ramakrishna Math and Mission in Allahabad and trained many novice monks there. He also supervised the construction of some of the buildings of Ramakrishna Mission Home of Service in Benaras as well as the Swami Vivekananda temple in Belur Math. He also provided valuable advices with regard to the construction of the other buildings of Ramakrishna Math.[3]

While studying in Patna, Hariprasanna had a vision of Ramakrishna, which took place on the day of the latter's passing away in Cossipore in Calcutta in 1886. While staying in Allahabad he also had a vision of Swami Vivekananda on the day the latter died in 1902. He had several other spiritual visions in various places like Benaras, Kalighat, Sarnath and Triveni in Allahabad.[4]

While Hariprasanna was in Government service, he had an uncommon integrity and sense of duty. He was also a great scholar and a voracious reader and had varied intellectual interests. As a monk he normally did not deliver lectures but held informal discussions with devotees and disciples. He also had a great humour sense. Vijnanananda loved seclusion, was frugal in his speech, and avoided giving spiritual instructions. Only after becoming Vice President he initiated a large number of people. In many things he was just like an innocent child. His frankness was beyond comparison. The same trait made him a very plain-speaking person, but his straight words would not give offence to anyone.[5]