Swami Gahanananda (October 1916 – 4 November 2007), the 14th President of the Ramakrishna Order, was born in the village of Paharpur in Sylhet District (now in Bangladesh) in October 1916. Known as Naresh Ranjan Roy Choudhury in his pre-monastic days, Swami Gahanananda joined the Ramakrishna Order at its centre in Bhubaneswar in January 1939 at the age of 22. He received initiation (mantra diksha) in 1939, brahmacharya in 1944 with the name 'Amrita-chaitanya' and Sannyasa from Swami Virajananda Maharaj, the then-President of the Order. He was greatly influenced by the dedicated lives of some of the monks of Ramakrishna Order, especially Swami Prabhananda (Ketaki Maharaj), who was his cousin in his pre-monastic life. He had also once met Swami Abhedanandaji Maharaj, a direct disciple of Sri Ramakrishna. He served at Advaita Ashrama, Kolkata, from 1942 to 1952 and at Shillong centre from 1953 to 1958.

From 1953 to 1958, he was in Shillong centre, where he worked under the guidance of Swami Saumyanandaji Maharaj. During this period he also organized flood relief operations in Assam a couple of times. Keenly interested in service to sick and suffering people, he was posted to the Mission's hospital centre, Ramakrishna Mission Seva Pratishthan, Kolkata, in 1958. There he worked during the first 5 years as its Assistant Secretary under Swami Dayanandaji and then as its Head for 22 years. He worked tirelessly to develop the services of Seva Pratishthan to cater to the medical needs of more and more people belonging to poor and low-income sections of the society and converted the original small maternity hospital into a huge 550-bed, modern, well-equipped hospital that it is today. 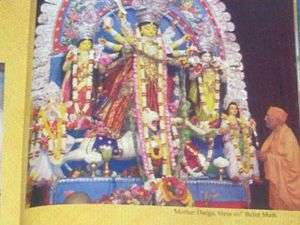 He was elected a Trustee of the Ramakrishna Math and Member of the Governing Body of the Ramakrishna Mission in 1965. In 1979, he was appointed an Assistant Secretary of the twin organizations. He became the General Secretary of the Math and Mission in 1989 and continued in that post for 3 years till 1992 when he became a Vice-President of the Order. In 1993, he represented the Ramakrishna Order at the commemorative function organized by Council for a Parliament of the World’s Religions in Chicago (and attended by 6500 people from all parts of the world) to celebrate the centenary of Swami Vivekananda’s historic appearance at the World Parliament of Religions. From 1992, he was also simultaneously the head of Ramakrishna Math (Yogodyan) at Kankurgachhi, Kolkata.

As a Vice-President of the Math and Mission, Swami Gahananandaji travelled extensively in various parts of the country and visited many branches of the Order. He also visited at different times various places in USA, Canada, England, France, Switzerland, the Netherlands, Russia, Australia, Japan, Myanmar, Sri Lanka, Bangladesh, Singapore, Malaysia and Mauritius. In all these places, he spread the message of Vedanta and Sri Ramakrishna, Holy Mother Sri Sarada Devi and Swami Vivekananda.

Swami Gahanananda died on Sunday, 4 November 2007 at 5.35 pm after a prolonged illness. He had been admitted to the Ramakrishna Mission Seva Pratisthan hospital in Kolkata on 4 September.

In the year 1932, with the aim of providing adequate health care to pregnant women and infants, a unique hospital known as "Shishu Mangal Pratishthan" came to be established in a small tin shed, by the untiring efforts of Swami Dayanandaji. In this institution, holding fast to the ideals placed by Swami Dayanandaji and placing himself under his guidance, Swami Gahananandaji shaped himself between 1958 and 1963. Keeping the lofty ideal of "service to humanity in the spirit of worship of God" bright before him, Maharaj set on a new spiritual journey. From 1958 to 1985, for long 27 years, he was intimately involved in the activities of the institution. It was owing to his strenuous efforts that "Shishu Mangal Pratishthan" developed into a full-fledged general hospital known as "Seva Pratishthan". There are multiple ways to serve humanity: providing good medical care and treatment to helpless sick persons was the new way of service that Sri Ramakrishna chose for Gahananandaji.