Sylvester Mowry (October 1830 - October 15, 1871) was an American best known as a pioneer and the founder of Mowry, Arizona. He also served as an officer in the United States Army and was arrested as a traitor during the American Civil War.[1][2] 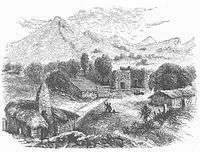 Born in 1830 at Providence, Rhode Island, Sylvester Mowry attended West Point in 1848 until graduating in 1852 as a lieutenant. Well educated, he spoke Latin and later became the author of the 1863 book The geography and resources of Arizona and Sonora. After West Point, Mowry went west and explored with the army for the Pacific Railroad until 1854. In 1856, Mowry was elected to be a delegate in the 35th Congress for the creation of Arizona Territory but because the bill did not pass, Mowry never took his seat. From then until 1857, Sylvester was stationed at Benicia, California and Fort Yuma. During his military career, Mowry became enemies with another officer named James H. Carleton, who later arrested him during the Civil War. Mowry served at Old Fort Buchanan before resigning his commission on July 31, 1858. He then went and lived in Tubac where on July 8, 1859 he fought a duel with Edward E. Cross who was an editor for the Weekly Arizonian and had written questionable things about Tucson and Mowry's mining operations. Both of the men were armed with rifles and they dueled on one of Tubac's streets. Four shots were fired but Cross disarmed himself sometime during the exchange and Mowry refused to continue shooting at an unarmed man. So the duel ended without bloodshed and the two apologized to each other. Cross was killed at the Battle of Gettysburg in 1863.[3][4]

In 1860, he was appointed by President James Buchanan a commissioner to establish the border between California and Nevada, but he was removed in 1861 due to politics. During his time as commissioner, Mowry became interested in mining and prospecting and in 1860 he purchased the Patagonia silver mine just southeast of the Santa Rita Mountains in southern Arizona. After renaming it the Mowry Silver Mine, Mowry began constructing a mill and a smelter for extracting precious minerals.[5][6]

A small settlement formed around the mining works which today is the ghost town of Mowry, Arizona. Mining occupied Mowry's time until 1862, by which time the Civil War had already begun and Confederate Arizona Territory had been established. Though a northerner and Republican, Mowry was a firm supporter of the new territory, as were many other Republicans in Arizona, during the Civil War, the majority of the Confederacy's political leadership were Democrats. The California Column began their advance across Confederate Arizona in 1862 from Fort Yuma; now a general, Mowry's enemy James H. Carleton was in command. After the Union capture of Tucson on May 20, 1862, First Lieutenant Edward Banker Willis proceeded to arrest Sylvester Mowry at his mine. Charged with selling lead to Arizona's Confederate militias, Mowry was detained at Fort Yuma from July 2, 1862 to November 8. He was released after a court appearance in which no evidence could be found that he had ever sold lead to rebels. Despite this fact, Mowry defended himself in court and justified his selling of lead to rebels even though he was found innocent. In his defense, he mentioned the basic American principles of life, liberty and the pursuit of happiness.[7]

Mowry also went on to describe New Mexico Territory, the eastern half being a great place of American progress on the frontier and the other a war zone, ravaged by the Apache and unfit for civilization. Mowry felt an obligation to sell lead to his fellow frontiersmen, regardless of political stance. In the early 1860s, the Apache were fighting all across southern Arizona. The Mowry Mine and its immediate surroundings was the scene of several Apache attacks before the town was mostly destroyed in 1863. Mowry later angrily described a way in which to defeat the Apaches:

Upon his release from Fort Yuma, Mowry was denied his land for several years and by the time of his return, the mine was too deteriorated so any attempt to restart operations would be very expensive. Mowry was once more elected to Congress after the Civil War but again he did not take his seat. Thus Mowry ended his life in the United States and eventually went to London, England to raise funds in order to return to Arizona. However, he died in London just before his birthday on October 15, 1871. News of Mowry's death reached Prescott, Arizona by October 19, which was a significant communications feat at the time; it usually took months to transfer information from Great Britain to the American frontier. Mowry's legacy is foremost the mine he left behind; it was later resettled and continued to be populated until well after the turn of the 20th century. Mowry is also an important figure in American folklore and is well known in many other American states. As of 2013, several adobe walls from the Mowry Mine are intact. Author John Ross Browne visited the ruins in 1864 and later wrote the book Adventures in the Apache Country, describing in detail the mine's infrastructure and history before it was destroyed.[8][9]