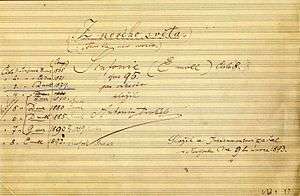 Title page of the autograph score of Dvořák's ninth symphony

The Symphony No. 9 in E minor, "From the New World", Op. 95, B. 178 (Czech: Symfonie č. 9 e moll „Z nového světa“), popularly known as the New World Symphony, was composed by Antonín Dvořák in 1893 while he was the director of the National Conservatory of Music of America from 1892 to 1895. It is by far his most popular symphony, and one of the most popular of all symphonies. In older literature and recordings, this symphony was often numbered as Symphony No. 5. Neil Armstrong took a recording of the New World Symphony to the Moon during the Apollo 11 mission, the first Moon landing, in 1969.[1]

Opening English horn theme from the second movement of the work

This symphony is scored for the following orchestra:

The piece has four movements:

Dvořák was interested in Native American music and the African-American spirituals he heard in America. As director of the National Conservatory he encountered an African-American student, Harry T. Burleigh, later a composer himself, who sang traditional spirituals to him and said that Dvořák had absorbed their 'spirit' before writing his own melodies.[4] Dvořák stated:

I am convinced that the future music of this country must be founded on what are called Negro melodies. These can be the foundation of a serious and original school of composition, to be developed in the United States. These beautiful and varied themes are the product of the soil. They are the folk songs of America and your composers must turn to them.[5]

The symphony was commissioned by the New York Philharmonic, and premiered on December 16, 1893, at Carnegie Hall conducted by Anton Seidl. A day earlier, in an article published in the New York Herald on December 15, 1893, Dvořák further explained how Native American music had been an influence on this symphony:

I have not actually used any of the [Native American] melodies. I have simply written original themes embodying the peculiarities of the Indian music, and, using these themes as subjects, have developed them with all the resources of modern rhythms, counterpoint, and orchestral colour.[6]

In the same article, Dvořák stated that he regarded the symphony's second movement as a "sketch or study for a later work, either a cantata or opera ... which will be based upon Longfellow's [The Song of] Hiawatha"[7] (Dvořák never actually wrote such a piece).[7] He also wrote that the third movement scherzo was "suggested by the scene at the feast in Hiawatha where the Indians dance".[7]

In 1893, a newspaper interview quoted Dvořák as saying "I found that the music of the negroes and of the Indians was practically identical", and that "the music of the two races bore a remarkable similarity to the music of Scotland".[8][9] Most historians agree that Dvořák is referring to the pentatonic scale, which is typical of each of these musical traditions.[10]

In a 2008 article in The Chronicle of Higher Education, prominent musicologist Joseph Horowitz asserts that African-American spirituals were a major influence on Dvořák's music written in America, quoting him from an 1893 interview in the New York Herald as saying, "In the negro melodies of America I discover all that is needed for a great and noble school of music."[11] Dvořák did, it seems, borrow rhythms from the music of his native Bohemia, as notably in his Slavonic Dances, and the pentatonic scale in some of his music written in America from African-American and/or Native American sources. Statements that he borrowed melodies are often made but seldom supported by specifics. One verified example is the song of the Scarlet Tanager in the Quartet. Michael Steinberg writes[12] that a flute solo theme in the first movement of the symphony resembles the spiritual "Swing Low, Sweet Chariot".[13] Leonard Bernstein averred that the symphony was truly multinational in its foundations.[14]

Dvořák was influenced not only by music he had heard, but by what he had seen, in America. He wrote that he would not have composed his American pieces as he had, if he had not seen America.[15] It has been said that Dvořák was inspired by the American "wide open spaces" such as prairies he may have seen on his trip to Iowa in the summer of 1893.[16] Notices about several performances of the symphony include the phrase "wide open spaces" about what inspired the symphony and/or about the feelings it conveys to listeners.[17]

Dvořák was also influenced by the style and techniques used by earlier classical composers including Beethoven and Schubert.[18] The falling fourths and timpani strokes in the New World Symphony's Scherzo movement evokes the Scherzo of Beethoven's Choral Symphony. In his fourth movement, Dvořák's use of flashbacks to prior movements is reminiscent of Beethoven quoting prior movements as part of the opening Presto of the last movement.[19]

At the premiere in Carnegie Hall, the end of every movement was met with thunderous clapping and Dvořák felt obliged to stand up and bow.[20] This was one of the greatest public triumphs of Dvořák's career. When the symphony was published, several European orchestras soon performed it. Alexander Mackenzie conducted the London Philharmonic Society in the European premiere on June 21, 1894.[20] Clapham says the symphony became "one of the most popular of all time" and at a time when the composer's main works were being welcomed in no more than ten countries, this symphony reached the rest of the musical world and has become a "universal favorite."[20] It was performed [as of 1978] more often "than any other symphony at the Royal Festival Hall, London" and is in "tremendous demand in Japan."[20]

Several themes from the symphony have been used widely in films, TV shows, anime, video games, and advertisements.

The theme from the Largo was adapted into the spiritual-like song "Goin' Home", often mistakenly considered a folk song or traditional spiritual, by Dvořák's pupil William Arms Fisher, who wrote the lyrics in 1922.[21][22][23][24]