Synthetic lethality arises when a combination of deficiencies in the expression of two or more genes leads to cell death, whereas a deficiency in only one of these genes does not. The deficiencies can arise through mutations, epigenetic alterations or inhibitors of one of the genes. In a synthetic lethal genetic screen, it is necessary to begin with a mutation that does not kill the cell, although may confer a phenotype (for example, slow growth), and then systematically test other mutations at additional loci to determine which confer lethality. Synthetic lethality indicates functional relationships between genes. 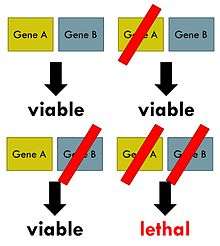 Schematic of basic synthetic lethality. Simultaneous mutations in gene pair confer lethality while any other combination of mutations is viable.

Synthetic lethality is a consequence of the tendency of organisms to maintain buffering schemes that allow phenotypic stability despite genetic variation, environmental changes and random events such as mutations. This genetic robustness is the result of parallel redundant pathways and "capacitor" proteins that camouflage the effects of mutations so that important cellular processes do not depend on any individual component.[4] Synthetic lethality can help identify these buffering relationships, and what type of disease or malfunction that may occur when these relationships break down, through the identification of gene interactions that function in either the same biochemical process or pathways that appear to be unrelated.[5]

Synthetic lethality may be explored in a variety of model organisms, including Drosophila melanogaster and Saccharomyces cerevisiae. Since synthetic lethal mutations are inherently inviable, common approaches are to employ temperature sensitive mutations or put mutations under the control of a regulated promoter to allow exploration of the phenotype without leading to death.[6] Some synthetic lethal pairs are detected while attempting to elucidate molecular mechanisms of fundamental biological processes without the use of high-throughput screens.[7] For instance, the synthetic lethality of Parkin and MTF1 in Drosophila was discovered when examining the relationship between oxidative stress and metal homeostasis in the pathogenesis of Parkinson's disease.

However, high-throughput synthetic lethal screens may help illuminate questions about how cellular processes work without previous knowledge of gene function or interaction. Screening strategy must take into account the organism used for screening, the mode of genetic perturbation, and whether the screen is forward or reverse. Many of the first synthetic lethal screens were performed in S. cerevisiae. Budding yeast has many experimental advantages in screens, including a small genome, fast doubling time, both haploid and diploid states, and ease of genetic manipulation.[8] Gene ablation can be performed using a PCR-based strategy and complete libraries of knockout collections for all annotated yeast genes are publicly available. Synthetic genetic array (SGA), synthetic lethality by microarray (SLAM), and genetic interaction mapping (GIM) are three high-throughput methods for analyzing synthetic lethality in yeast. A genome scale genetic interaction map was created by SGA analysis in S. cerevisiae that comprises about 75% of all yeast genes.[9] By examining 5.4 million gene-gene pairs for synthetic lethality, an unbiased network of functional connections between genetic interactions was constructed.

High-throughput synthetic lethality screens are also performed in metazoans, but a major challenge is efficient gene perturbation. In the nematode C. elegans, RNA-interference can be combined with a query strain loss-of-function mutation. While RNA-interference is more experimentally demanding in Drosophila, living cell microarrays allow knockdown of two genes simultaneously.[10] RNA-interference is also feasible in mammalian cells, and chemical screens in mammalian cell lines is important for identifying pharmacological targets of drugs.

Synthetic lethal analysis can be used to elucidate mechanisms of known chemotherapeutic drugs by identifying genes whose function is necessary for drug function. For example, BRCA1 and BRCA2 are important for repairing double-strand breaks in DNA, and mutations in these genes predispose individuals to breast cancer and ovarian cancer.[11] The enzyme PARP1 is involved in repairing single-strand breaks, and the inhibition of PARP1 in a BRCA mutant background is selectively lethal to tumors because cancer cells accumulate DNA lesions that they cannot repair. Synthetic lethality is also useful for screening libraries of molecules to detect drugs that selectively inhibit cancer cells. In a recent chemical-genetic screen, one compound of 3200 screened molecules was a synthetic lethal inhibitor of pancreatic cancer KRAS gain-of-function cells, which suggests a potential treatment for this cancer type.[12]

As pointed out by Gao et al.,[13] the stability and integrity of the human genome are maintained by the DNA damage repair (DDR) system. In the presence of a defect in DDR, DNA damages will accumulate. Un-repaired DNA damage is a major cause of mutations that drive carcinogenesis.[14][15] Such excess DNA damage can increase mutational errors during DNA replication due to error-prone translesion synthesis. Excess DNA damage can also increase epigenetic alterations due to errors during DNA repair.[16][17] Such mutations and epigenetic alterations are the source of the mut-drivers and epi-drivers[18] that cause progression to cancer.

Prominence of DDR deficiencies in cancers

Early epigenetic or mutational alterations in DDR genes are likely the source of the genetic instability characteristic of cancers.[22] While a mutation or epimutation in a DDR gene, itself, would not confer a selective advantage, such a repair defect may be carried along as a passenger in a cell when the cell acquires an additional mutation/epimutation that does provide a proliferative advantage. Such cells, with both proliferative advantages and one or more DNA repair defects (causing a very high mutation rate), likely give rise to the 20,000 to 80,000 total genome mutations frequently seen in cancers. Thus a defect in a DDR gene is likely to be present in cancers (see, e.g. frequencies of epimutations in DNA repair genes in cancers). Synthetic lethality with an identified DNA repair defect in a cancer could thus be a frequent effective method for therapeutic attack on the cancer.

Mutations in genes employed in DNA mismatch repair (MMR) cause a high mutation rate.[23][24] In tumors, such frequent subsequent mutations often generate "non-self" immunogenic antigens. A human Phase II clinical trial, with 41 patients, evaluated one synthetic lethal approach for tumors with or without MMR defects.[25] In the case of sporadic tumors evaluated, the majority would be deficient in MMR due to epigenetic repression of an MMR gene (see DNA mismatch repair). The product of gene PD-1 ordinarily represses cytotoxic immune responses. Inhibition of this gene allows a greater immune response. In this Phase II clinical trial with 47 patients, when cancer patients with a defect in MMR in their tumors were exposed to an inhibitor of PD-1, 67% - 78% of patients experienced immune-related progression-free survival. In contrast, for patients without defective MMR, addition of PD-1 inhibitor generated only 11% of patients with immune-related progression-free survival. Thus inhibition of PD-1 is primarily synthetically lethal with MMR defects.

The analysis of 630 human primary tumors in 11 tissues shows that WRN promoter hypermethylation (with loss of expression of WRN protein) is a common event in tumorigenesis.[26] The WRN gene promoter is hypermethylated in about 38% of colorectal cancers and non-small-cell lung carcinomas and in about 20% or so of stomach cancers, prostate cancers, breast cancers, non-Hodgkin lymphomas and chondrosarcomas, plus at significant levels in the other cancers evaluated. The WRN helicase protein is important in homologous recombinational DNA repair and also has roles in non-homologous end joining DNA repair and base excision DNA repair.[27]

As reviewed by Murata et al.,[34] five different PARP1 inhibitors are now undergoing Phase I, II and III clinical trials, to determine if particular PARP1 inhibitors are synthetically lethal in a large variety of cancers, including those in the prostate, pancreas, non-small-cell lung tumors, lymphoma, multiple myeloma, and Ewing sarcoma. In addition, in preclinical studies using cells in culture or within mice, PARP1 inhibitors are being tested for synthetic lethality against epigenetic and mutational deficiencies in about 20 DNA repair defects beyond BRCA1/2 deficiencies. These include deficiencies in PALB2, FANCD2, RAD51, ATM, MRE11, p53, XRCC1 and LSD1.

ARID1A, a chromatin modifier, is required for non-homologous end joining, a major pathway that repairs double-strand breaks in DNA,[35] and also has transcription regulatory roles.[36] ARID1A mutations are one of the 12 most common carcinogenic mutations.[37] Mutation or epigenetically decreased expression[38] of ARID1A has been found in 17 types of cancer.[39] Pre-clinical studies in cells and in mice show that synthetic lethality for deficient ARID1A expression occurs by either inhibition of the methyltransferase activity of EZH2,[40][41] or with addition of the kinase inhibitor dasatinib.[42]

There are two pathways for homologous recombinational repair of double-strand breaks. The major pathway depends on BRCA1, PALB2 and BRCA2 while an alternative pathway depends on RAD52.[43] Pre-clinical studies, involving epigenetically reduced or mutated BRCA-deficient cells (in culture or injected into mice), show that inhibition of RAD52 is synthetically lethal with BRCA-deficiency.[44]

Although treatments using synthetic lethality can stop or slow progression of cancers and prolong survival, each of the synthetic lethal treatments has some adverse side effects. For example, more than 20% of patients treated with an inhibitor of PD-1 encounter fatigue, rash, pruritus, cough, diarrhea, decreased appetite, constipation or arthralgia .[45] Thus, it is important to determine which DDR deficiency is present, so that only an effective synthetic lethal treatment can be applied, and not unnecessarily subject patients to adverse side effects without a direct benefit.