T2K (Tokai to Kamioka, Japan) is a particle physics experiment that is a collaboration between several countries, including Japan, Canada, France, Germany, Italy, South Korea, Poland, Russia, Spain, Switzerland, the United States, and the United Kingdom. It is the second generation follow up to the K2K experiment, a similar long baseline neutrino oscillation experiment.

The J-PARC facility produces an intense off-axis beam of muon neutrinos. The beam is directed towards the Super-Kamiokande detector, which is 295 km away. The main goal of T2K is to measure the oscillation of
ν
μ to
ν
e and to measure the value of θ13, one of the parameters of the Pontecorvo–Maki–Nakagawa–Sakata matrix.

On June 15, 2011, the T2K collaboration announced[1] the observation of six electron neutrino-like events compared to an expected background of 1.5, a significance of 2.5 standard deviations.[2]

On July 19, 2013, at the European Physical Society meeting in Stockholm, the international T2K collaboration announced a definitive observation of muon neutrino to electron neutrino transformation.[3]

The goal of the T2K experiment is to gain a more complete understanding of neutrino oscillation parameters. Previous neutrino experiments observed the disappearance of muon neutrinos in a beam as they oscillate to tau neutrinos, but oscillation from
ν
μ to
ν
e was not observed until July 19, 2013. The reason for this is that the mixing angle θ13, that controls the probability for this oscillation, is very small. T2K was the first experiment to measure the appearance of electron neutrinos in a muon neutrino beam. T2K's ND280 detector will take data on neutrino interaction cross section measurements on water. Precise measurements of the other neutrino mixing parameter Δm2
23 and θ23 are another aim of the experiment. Future upgrades to T2K could yield measurement of the CP violation phase δ by comparing oscillations of neutrinos to those of antineutrinos. 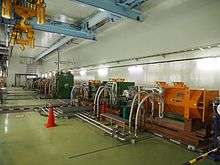 The J-PARC facility has a more powerful accelerator than the KEK facility used in the K2K experiment. The main synchrotron will eventually be able to accelerate protons to 50 GeV/c. Protons colliding with the target material will produce (mostly) positive pions which will decay into antimuons and muon neutrinos. The beam power is expected to be 0.75 MW delivering 110 times more neutrino events than K2K.

The neutrino beam at J-PARC is designed so that it is directed 2 to 3 degrees away from the Super-Kamiokande detector. This lowers the flux of neutrinos reaching the detector but provides a more desirable neutrino energy spectrum. Off-axis the peak energy is low with higher energies being suppressed. At the distance between Tokai and Kamioka, maximal neutrino oscillation is expected to occur at energies lower than 1 GeV. 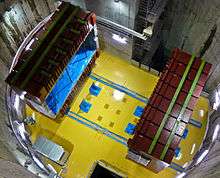 The near detector 280 meters (ND280) from the graphite target is a segmented detector composed of neutrino targets inside a tracking system surrounded by a magnet taken from the UA1 experiment. ND280 is able to measure the neutrino beam's energy spectrum, flux, flavor content, and interaction cross-sections before the neutrino oscillation. The detector is located 280 m from the target in the off-axis direction.

Three time projection chambers (TPCs) will be able to measure the momenta of muons produced by charged current reactions in the detector, this information will yield the neutrino energy spectrum. Also the TPCs can be used for particle identification.

Two fine-grained detectors (FGDs) are placed after the first and second TPCs. Together the FGDs and TPCs make up the tracker portion of ND280. The FGDs provide the active target mass for the neutrino interactions and are able to measure the short tracks of proton recoil.

The first FGD is composed of 30 layers of 192 segmented scintillating bars, alternating between vertical and horizontal layers, while the second FGD is composed of 14 alternating layers of segmented scintillating bars and 6 water modules. Each bar has a hole down the center containing a WaveLength Shifting fiber which collects some of the light from scintillation and is read out by a MPPC at one end. The other end of the fiber is mirrored with aluminum in order to increase overall light yield reaching the MPPC. The mirrored end also has an LED light injection system for calibration and testing the integrity of the fibers. The second FGD is partially composed of water because the detector at Super-Kamiokande is water-based. This water is maintained under subatmospheric pressure to ensure that in case of a leak air will be sucked in rather than water spill out inside the FGD. Cross sections on carbon and on water can be determined from a comparison of neutrino interactions in the two FGDs.

The Pi Zero detector (
π0
) is composed of layers of triangular scintillating plastic bars with embedded wavelength shifting fibers to channel light. Thousands of Multi-Pixel Photon Counters(MPPCs) are used to receive photon counts synchronously to detect particle events. These particle events are correlated to proton beam spill timings and are reconstructed using geometric and intensity data of photon counts. The P0D is used to measure neutral pions produced in neutral current interactions. The tracker and the Pi Zero detector are surrounded by an electromagnetic calorimeter and side range muon detector. Detection of Pi0s is important because they are one of the major backgrounds of detecting neutrinos at SuperK.

The Side Muon Range Detector (SMRD) consists of scintillator modules which are inserted into the gaps in the magnet. The SMRD records muons escaping the inner parts of the detector at large angles with respect to the beam direction. It can also act as a trigger for cosmic rays. Finally it can help identify beam interactions in the surrounding walls and in the magnet itself.

Data Acquisition from the T2K near detector was implemented by British, Canadian and Spanish collaborators using MIDAS.

The Super-Kamiokande detector is massive, even by particle physics standards. It consists of 50,000 tons of pure water surrounded by about 11,200 photomultiplier tubes. The detector is a cylindrical structure 41.4 m tall and 39.3 m in diameter. The inner detector is surrounded by a more sophisticated outer detector that is used to distinguish between cosmic muons and muons resulting from decay within the detector.

Super-Kamiokande started collecting data in 1996 and has made several important measurements. These include precision measurement of the solar neutrino flux using the elastic scattering interactions, the first strong evidence for neutrino oscillations, and a more stringent limit on proton decay.

The collaboration is investigating the use of grid resources to deliver the computing power needed by the experiment. This is motivated by the success of the LHC Computing Grid (wLCG) being used by the LHC experiments. The T2K.org virtual organization has access to resources from France Grilles, GridPP and IberGrid.[4]