It was located east of the Semien Province and north of Abergele, a historic district of the Begemder province. On the east, it was bordered by the Enderta Province.

The former capital of the province was Abi Addi, nowadays located in Kola Tembien (Lower Tembien). The region reached a highpoint in the Tembien mountains at 2828 meters above sea level, just south of the town of Hagere Selam, Tigray. 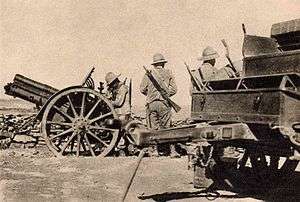 During the Second Italo-Ethiopian War, in January 1935, Italian and Eritrean forces under command of Italian general Pietro Badoglio tried to conquer the Tembien during the First Battle of Tembien. The Ethiopians launched a counterattack, but thanks to the Italian Royal Air Force and their mustard gas attacks, the Italian forces could stand their ground. Fighting continued during the Second Battle of Tembien at the end of February 1935, in which the Italians succeeded in defeating the Ethiopian forces and capturing the Tembien highlands. Fighting would continue for over a year, but in May 1936, Badoglio's force marched into Addis Ababa on 5 May. The colony of Italian East Africa was officially established on 1 June 1936.

Italy named one of the submarines of their Adua-class submarines after the region.

This article is issued from Wikipedia - version of the 10/6/2014. The text is available under the Creative Commons Attribution/Share Alike but additional terms may apply for the media files.