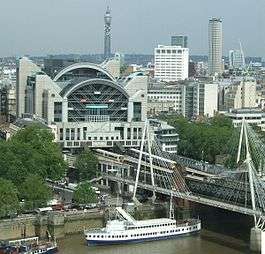 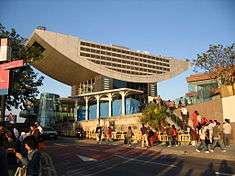 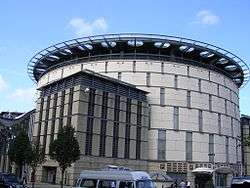 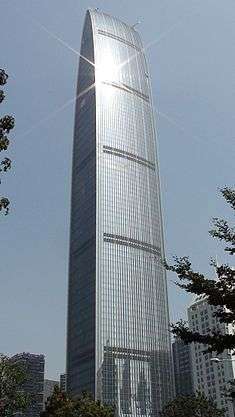 Sir Terry Farrell, CBE, RIBA, FRSA, FCSD, MRTPI (born 12 May 1938) is a British architect and urban designer. In 1980, after working 15 years in partnership with Sir Nicholas Grimshaw, Farrell founded his own firm, Farrells. He garnered a strong reputation for contextual urban design schemes, as well as exuberant works of postmodernism such as the MI6 building. In 1991 his practice expanded internationally, opening an office in Hong Kong. In Asia his firm designed KK100 in Shenzhen, the tallest building ever designed by a British architect, as well as Guangzhou South Railway Station, once the largest railway station in Asia.

Farrell was born in Sale, Cheshire.[2] As a youth he moved to Newcastle upon Tyne, where he attended St. Cuthbert's High School. He graduated with a degree from Newcastle University, followed by a Masters in urban planning at the University of Pennsylvania in Philadelphia.

In the early part of his career with Grimshaw, Farrell gave emphasis to housing projects. Later, after the break with Grimshaw, he became the UK's principal postmodernist and was best known for the TV-am headquarters in Camden Lock and the redevelopment of Comyn Ching Triangle in London's Covent Garden. In the 80s and 90s his projects included Charing Cross Station, the MI6 headquarters building, The Deep Aquarium in Hull and The International Centre for Life in Newcastle. More recent work includes the new headquarters for the Home Office, the conversion of the Grade 1 listed Royal Institution of Great Britain and the Great North Museum in Newcastle.[3]

Over the course of his career he has been responsible for regeneration projects in the UK including Newcastle Quayside, Brindleyplace in Birmingham, Edinburgh Exchange District, Greenwich Peninsula and Paddington Basin.[4] He has also designed his own iconic buildings within these projects, including the Edinburgh International Conference Centre and The Point in Paddington Basin. In May 2010 he was appointed to regenerate the 72-acre (290,000 m2) area around Earls Court exhibition centre.[5] In 2012 his practice was appointed as masterplanners for Wood Wharf – the next phase of Canary Wharf´s development.[6]

In East Asia, projects include Incheon International Airport in Seoul and Beijing South Railway Station – the largest in Asia. When completed in December 2010 Guangzhou South Railway Station was for a time the largest railway station in the world. Since setting up his practice in Hong Kong in 1990 he has designed the Peak Tower, Kowloon Station development[7] and the British Consulate-General, Hong Kong. His KK100 tower in Shenzhen is the tallest building ever by a British architect.[8]

Farrell has contributed to key strategic issues. He advises the Mayor of London[9] on his Design Advisory Committee and the Department for Transport on high-speed rail (HS2).[10] In 2008 he was appointed Design and Planning Leader for the Thames Gateway[11] – Europe’s largest regeneration project.

Farrell has been married three times and has five children – one of them, Jo Farrell, is an award-winning photographer.[12]