The Texas Eagle was a streamlined passenger train operated by the Missouri Pacific Railroad and the Texas and Pacific Railway between St. Louis, Missouri, and multiple destinations in the state of Texas. It operated from 1948 to 1971. The Texas Eagle was one of many trains discontinued when Amtrak began operations in 1971, although Amtrak would revive service over the Missouri Pacific with the Inter-American in 1974. This train was renamed the Eagle in 1981 and finally the Texas Eagle in 1988. 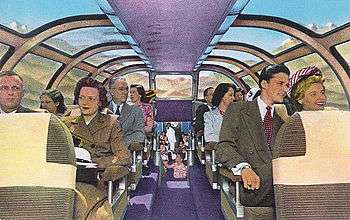 Planetarium Dome coaches were featured equipment on the Texas Eagle.

The Texas Eagle began on August 15, 1948, with the renaming of the Sunshine Special.[1]:119 For thirteen years, the Texas Eagle operated as two separate sections, leaving St. Louis in the late afternoon, one following behind the other at an approximately 10-minute interval. At Longview, the routes diverged. The west Texas section continued to Dallas and El Paso, while the south Texas section split off cars for Houston and Galveston at Palestine, then operated to Austin and San Antonio, where a connection was made to the Aztec Eagle for Laredo, Texas and Mexico City. In 1952, dome cars were added to the train. After 1961, the Texas Eagle was consolidated as a single, very long train, between St. Louis and Longview, Texas, where the train was split into several sections, each serving different Texas cities. The west Texas section (the West Texas Eagle) of the Texas Eagle continued from Longview to Dallas, Fort Worth, and El Paso; the south Texas section (South Texas Eagle) served Palestine, Austin, San Antonio, and Laredo, with a through Pullman continuing to Mexico City. A third section of the Texas Eagle split from the main train at Palestine, providing service to Houston.[2]

From its inception in 1948 the Texas Eagle carried through sleepers from the Pennsylvania Railroad's Penn Texas, providing a one-seat ride from Washington, D.C. and New York City to Texas. Through sleeper service ended on June 30, 1961, but it was still possible to make a connection between the two trains.[3]:134–135

The western section ended May 31, 1969, leaving a San Antonio-St. Louis service.[2] The Missouri Pacific discontinued the remaining Texas intrastate segment of the Texas Eagle on September 22, 1970. The Missouri Pacific bypassed the Interstate Commerce Commission by arguing (to the Texas Railroad Commission) that the "Texas Eagle" was not an interstate train but rather three intrastate trains: one which ran San Antonio-Texarkana, another which ran from Texarkana to the Missouri border, and a third which ran from the Missouri border to St. Louis. The Texas Railroad Commission accepted this argument and permitted the Missouri Pacific to end the Texas portion of the Texas Eagle.[4] The Texas Railroad Commission ruling was handed down less than a month before President Nixon signed Railpax legislation which placed a moratorium on passenger train discontinuances in anticipation of the start-up of Amtrak. The St. Louis-Texarkana truncation of the Texas Eagle continued running until the advent of Amtrak on May 1, 1971, when it was discontinued.[2]

The December 1952 edition of the Official Guide of the Railways listed the following for a southbound Texas Eagle:[5]