Longview is a city in Gregg and Harrison counties in the U.S. state of Texas. In the 2010 Census, the population was 80,455. Most of the city is located in Gregg County, of which it is the county seat;[4] a small part extends into the western part of neighboring Harrison County. It is located in East Texas, where Interstate 20 and U.S. Highways 80 and 259 converge just north of the Sabine River.

Longview is the principal city of the Longview Metropolitan Statistical Area, comprising Gregg, Upshur, and Rusk counties (population 217,481).[5] Longview is considered a major hub city for East Texas, as is the nearby city of Tyler. In 2014, Forbes magazine ranked Longview as the sixth fastest-growing small city in the United States.[6] 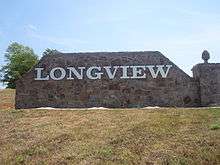 The city of Longview was founded in the 1870s by Ossamus Hitch Methvin, Sr.[7] In 1870, Methvin sold 100 acres (40 ha) to the Southern Pacific Railroad for one dollar to persuade them to build their line in the direction of land he owned. Later that year, he sold another 100 acres (40 ha) for $500 in gold. He hoped the coming of the railroad would increase the value of the rest of his land.

Methvin also coined the name of the town when he stated, "What a long view!" from his home. In June 1871, Longview was incorporated as the first town in Gregg County.[8][7]

In July 1919, a reporter for the Chicago Defender was in Longview looking into the mysterious death of a black man named Lemuel Walters. An armed white mob attacked a home where the reporter, S.L. Jones, was staying and attempted to batter their way in. A gunfight began between the attackers and the men in the house began. Eventually, Jones made a getaway. The white men then began to burn buildings in the black section of the town.[9]

In 1942, construction began on the Big Inch pipeline in Longview. From 1943 to 1945, the pipeline transported over 261,000,000 barrels of crude oil to the East Coast.[7] At the time of construction, Big Inch and its smaller twin, Little Inch, comprised the longest petroleum pipeline ever built in the world. Both were integral in supplying the United States war effort in World War II.

Winter: Winters are mild. Average snowfall is less than 2 inches (5 cm), with usually one or two ice storms each winter. Normal highs are from the 50s–60s. Lows range from the 30s to the 40s. Temperature rarely dips below 20 °F and occasionally can get as warm as 80 °F during the winter months.

Spring: The season brings storms as a transition from winter to summer. Temperatures range from the 60s to 80s for the high, and the 40s to the 60s for the low. The average date of the last frost is April 4. Severe thunderstorms are common during this season as cold fronts pass though the area. This is the wettest time of year.

Summer: The summer is hot and humid. Temperatures slowly climb from the 90s to the 100s going into the dog days of summer. Lows are in the 70s. This is the driest and sunniest time of year. The heat index can climb to around 110 °F.

Fall: Fall is marked by the first cold front that knocks the 100-degree temperatures down into the 90s. Foliage begins to change in late October. Temperatures cool down and dew points drop. 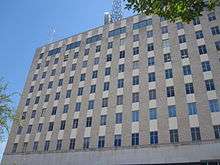 Longview's tallest building is 10 stories and houses the Citizens National Bank. When it was built in 1956, it was built to be able to be expanded to 17 stories. 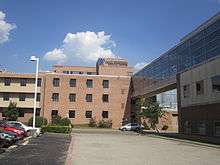 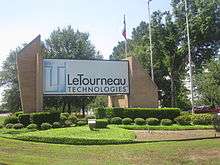 The economy in Longview is healthy. Despite a national downturn in the housing market, Longview has been growing, and home prices continue to rise. Some major sectors of the Longview economy include the East Texas Oil Field, services, technology, such as Exponential Networks, and manufacturing. In 2007, Longview added some major chain stores to its north side. The addition of Kohl's, two Starbucks, a new Target, a third Walmart supercenter on the south side, and a handful of hotels means Longview is becoming a regional hub for shopping. Keeping shoppers in Longview and away from Tyler, Dallas, and Shreveport has been an important strategy for the city. Most new construction has been located on the north side around Hawkins Pkwy. and US 259, with lesser development on the south side near Estes Pkwy.

Longview is one of several cities in East Texas that serves as a center for the "patent troll" industry, due to a perception that the United States District Court for the Eastern District of Texas is a favorable venue for patent infringement plaintiffs.[13]

According to the municipal 2011 Comprehensive Annual Financial Report,[14] the top employers in the city are: 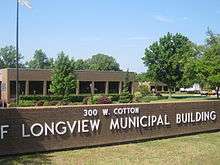 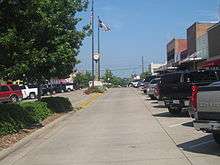 Downtown Longview in the historic district

The structure of the management and coordination of city services is:[16]

Longview is part of Texas's 1st congressional district, which is currently represented by Republican Louie Gohmert. 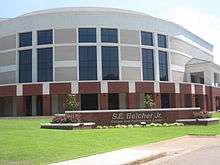 The city of Longview is home to three institutions of higher learning and two trade (cosmetology) schools:

East Texas Regional Airport offers service to Dallas-Fort Worth International Airport via Envoy Air. The airport continues to grow. In 2007, it was designated a foreign trade zone.

The airport is known by pilots around the region for its large, 10,000-foot (3 km) runway. It serves as a backup landing site for U.S. space shuttles. I

The Longview airport is home to the flight training program of LeTourneau University. The aeronautical students do classwork at the airport, as well as all their flight training.

Amtrak passenger rail service is available on the Texas Eagle through a downtown terminal. Longview's Amtrak station is the second-busiest in Texas and the fourth-busiest station along the Texas Eagle route. The Longview Amtrak station is a connection stop where passengers can connect to Nacogdoches, Houston, and Galveston, as well as Shreveport, Louisiana, by motorcoach. Daily trains between Chicago and San Antonio stop each morning (Chicago–San Antonio) and each evening (San Antonio–Chicago). Monday, Wednesday and Friday, the Longview station serves the Chicago to Los Angeles trains. The return train, Los Angeles to Chicago, stops in Longview on Sunday, Tuesday, and Friday. It serves about 20–50 passengers per day. A proposal is in the works for a high-speed rail system from Dallas/Fort Worth to Shreveport along the I-20 corridor.

Longview is accessed easily by I-20. New construction has prompted some major upgrades to the city's system of roads. Medians have been added to Loop 281 as Phase I of the project is nearing completion. Phase II of the project will upgrade the road to a six-lane parkway. Slated to start in 2009, TxDOT has informed Longview officials that the funds have been withdrawn, placing Phase II on indefinite hold. TxDOT is researching an outer loop around the north side of Longview to complete the East Texas Hourglass. The road will loop around Longview and Tyler and is slated to start in 2012.

The new I-69, will be passing just east of the Longview area between Longview and Marshall, near or over the current US 59 highway.

Longview and Gregg County are part of the Tyler-Longview-Lufkin-Nacogdoches Designated Market Area, DMA #110. These in-market television stations are available over the air:

The five major network stations in the market have local newscasts which all originate from Tyler. KYTX formerly presented a Longview-centered newscast, which ended in 2010. The station does still continue to broadcast Longview news from their Longview newsroom. The once-daily KFXK newscast is at 9:00 PM weekdays.

In addition to the in-market stations, most areas can receive some or all of the following stations from the Shreveport, LA - Texarkana, TX DMA:

Longview and Gregg County are part of the Tyler-Longview Arbitron Radio Market, market #145. These radio stations can be reliably received in most parts of the city: