The Boston Post was a daily newspaper in New England for over a hundred years before it folded in 1956. The Post was founded in November 1831 by two prominent Boston businessmen, Charles G. Greene and William Beals.

Edwin Grozier bought the paper in 1891. Within two decades, he had built it into easily the largest paper in Boston and New England. He passed it to his son, Richard, upon his death in 1924. Under the younger Grozier, The Boston Post grew into one of the largest newspapers in the country. At its height in the 1930s, it had a circulation of well over a million readers. At the same time, Richard Grozier suffered an emotional breakdown from the death of his wife in childbirth from which he never recovered.

Throughout the 1940s, facing increasing competition from the Hearst-run papers in Boston and New York and from radio and television news, the paper began a decline from which it never recovered. 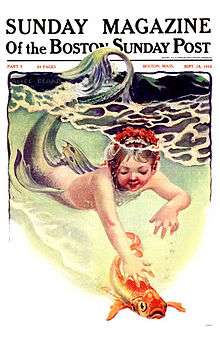 Sunday Magazine of the The Boston Sunday PostSeptember 18, 1910.

In 1909, under the savvy ownership of Edwin Grozier, the Boston Post engaged in its most famous publicity stunt. The paper had several hundred ornate, gold-tipped canes made and contacted the selectmen in New England's largest towns. The Boston Post Canes were given to the selectmen and presented in a ceremony to the town's oldest living man.[8] The custom was expanded to include a community's oldest women in 1930. Many towns in New England still carry on the Boston Post cane tradition with the original canes they were awarded in 1909.[8]