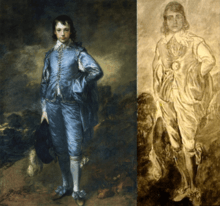 comparison of Gainsborough's painting with the one in the film

The Boy in Blue (German: Knabe in Blau and also known as Emerald of Death) is a 1919 silent German drama film directed by F. W. Murnau. It was Murnau's directorial debut. The film is now considered to be a lost film, though the Deutsche Kinemathek film archive possesses 35 small fragments ranging from two to eleven frames in length.[1][2]

Thomas Gainsborough's painting The Blue Boy and Oscar Wilde's novel The Picture of Dorian Gray were inspirations for Murnau to create this film.[3]

Media related to Der Knabe in Blau at Wikimedia Commons

This article is issued from Wikipedia - version of the 12/6/2015. The text is available under the Creative Commons Attribution/Share Alike but additional terms may apply for the media files.