The New England Journal of Medicine

The New England Journal of Medicine (NEJM) is a weekly medical journal published by the Massachusetts Medical Society. It is among the most prestigious peer-reviewed medical journals[1] as well as the oldest continuously published one.[1] 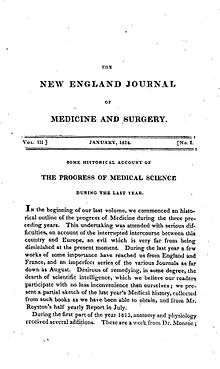 January 1814 edition of the Journal. 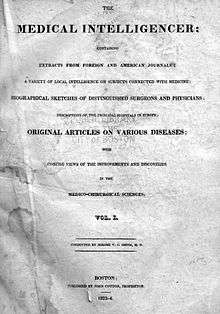 On April 29, 1823, another publication, the Boston Medical Intelligencer, appeared under the stewardship of Jerome V.C. Smith.[5][6] 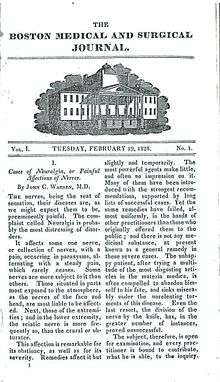 The Intelligencer ran into financial troubles in the spring of 1827, and the editors of the New England Journal of Medicine and Surgery and the Collateral Branches of Medical Science purchased it in February 1828 merging the two publications to form the Boston Medical and Surgical Journal,[5] published weekly.

The Massachusetts Medical Society purchased it in 1921 for $1[7] and renamed it in 1928 the New England Journal of Medicine. 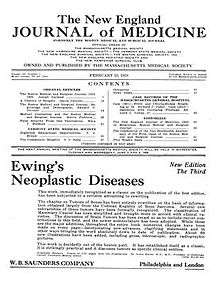 February 23, 1928, cover of The New England Journal of Medicine. First use of present name.

Notable articles from the course of the New England Journal of Medicine's history include:

On April 25, 1996, NEJM announced their new website, which published each week the abstracts for research articles and the full text of editorials, cases, and letters to the editor. After print publishing for 184 years this was the NEJM's first use of the Internet for electronic publication.[17]

The website was launched several months earlier in 1996, but the editors wanted proof that weekly electronic publication would work. Only then was an announcement approved for publication on the editorial page. Two years later, online publication extended to include the full text of all articles.[18]

Since its launch, NEJM has added to its website:

The website for the George Polk Awards noted that its 1977 award to the New England Journal of Medicine "provided the first significant mainstream visibility for a publication that would achieve enormous attention and prestige in the ensuing decades."[21]

The New England Journal of Medicine requires that articles it publishes have not been published or released elsewhere. Referred to as the Ingelfinger rule, this policy protects the originality of content.

The rule was first described in a 1969 editorial by Franz Ingelfinger, the editor-in-chief at that time. A number of medical journals have similar rules in place.

In the early 2000s, the New England Journal of Medicine was involved in a controversy around problems with research on the drug Vioxx. A study was published in the journal in November 2000 which noted an increase in myocardial infarction amongst those taking Vioxx.[25] According to Richard Smith, the former editor of the British Medical Journal, concerns about the correctness of that study were raised with the journal's editor, Jeff Drazen, as early as August 2001. That year, both the US Food and Drug Administration and the Journal of the American Medical Association also cast doubt on the validity of the data interpretation that had been published in the NEJM.[26] Merck withdrew the drug from market in September 2004. In December 2005, NEJM published an expression of concern about the original study following discovery that the authors knew more about certain adverse events than they disclosed at the time of publication. From the Expression of Concern: "Until the end of November 2005, we believed that these were late events that were not known to the authors in time to be included in the article published in the Journal on November 23, 2000. It now appears, however, from a memorandum dated July 5, 2000, that was obtained by subpoena in the Vioxx litigation and made available to the Journal, that at least two of the authors knew about the three additional myocardial infarctions at least two weeks before the authors submitted the first of two revisions and 4 1/2 months before publication of the article."[27] During the five-year period between publication and Expression of Concern, it has been estimated that Merck paid NEJM as much as US$836,000 for article reprints that Merck used for promotional purposes.[28] The journal was publicly rebuked for its response to the research issues in editorials appearing in publications including the British Medical Journal[26] and the Journal of the Royal Society of Medicine.[29]

NEJM provides delayed free online access to its research articles (it does so six months after publication, and maintains that access dating back to 1990).[30] This delay does not apply to readers from the least developed countries, for whom the content is available at no charge for personal use.[31]

NEJM also has two podcast features, one with interviews of doctors and researchers that are publishing in the journal, and another summarizing the content of each issue. Other offerings include Continuing Medical Education, Videos in Clinical Medicine (showing videos of medical procedures), and the weekly Image Challenge.