Theodore Roosevelt Wilderness is located in the U.S. state of North Dakota. Created by an act of Congress in 1978, the wilderness covers an area of 29,920 acres (121 km2) and comprises over a third of the entire area of Theodore Roosevelt National Park both of which are managed by the National Park Service. There are two geographically separated sections of wilderness, one in each of the units of the National Park. The northern section covers most of the North Unit of the park, in McKenzie County, whereas the somewhat smaller southern section covers only the western portion of the larger South Unit, in Billings County. The southern section is located at 46°59′N 103°33′W﻿ / ﻿46.983°N 103.550°W﻿ / 46.983; -103.550. 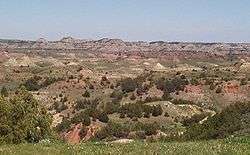 The wilderness protects from development the wildest sections of the National Park, an area described as badlands where erosional forces have carved steep cliffs into the relatively flat prairie. Bison, pronghorn, elk, mule deer and coyote are all found here, along with hundreds of species of birds such as the bald eagle, falcon and hawk. The wilderness is separated into two sections along with the park, a north and a south unit, by a distance of 70 miles (110 km). The Little Missouri River is on the south side of both units and is credited for being the primary erosional source which created the badlands topography.

85 miles (137 km) of trails allow access to the most remote sections of the wilderness. Camping is allowed with a permit, however gathering wood for fires is prohibited and overnighters are encouraged to bring a portable stove.

U.S. Wilderness Areas do not allow motorized or mechanized vehicles, including bicycles. Although camping and fishing are usually allowed with a proper permit, no roads or buildings are constructed and there is also no logging or mining, in compliance with the 1964 Wilderness Act. Wilderness areas within National Forests and Bureau of Land Management areas also allow hunting in season.