This article is about an Empress. It is not to be confused with her granddaughter Theophanu, Abbess of Essen Abbey from 1039–1058.
For other Byzantine Empresses named Theophano, see Theophano (disambiguation).

Theophanu (Greek: Θεοφανώ, Theophano; c. 955 – June 15, 991), also spelled Theophania (Θεοφάνια), Theophana or Theophano, was the niece of the Byzantine Emperor John I Tzimiskes. By her marriage with Holy Roman Emperor Otto II, she was Empress consort of the Holy Roman Empire and held regency as Empress dowager upon her husband's death in 983. Her name is derived from Medieval Greek Theophaneia (Θεοφάνεια), "appearance of God" (Theophany).

According to the marriage certificate issued on 14 April 972—a masterpiece of the Ottonian Renaissance—Theophanu is identified as the neptis (niece or granddaughter) of Emperor John I Tzimiskes (925–976) who was of Armenian descent. She was nevertheless of distinguished noble heritage: the Vita Mahthildis identifies her as augusti de palatio and the Annales Magdeburgenses describe her as Grecam illustrem imperatoriae stirpi proximam, ingenio facundam.[1] Recent research tends to concur that she was most probably the daughter of Tzimiskes' brother-in-law (from his first marriage) Constantine Skleros (c. 920–989), and of Sophia Phokaina, who was Tzimiskes' cousin as the daughter of Kouropalatēs Leo Phokas, brother of Emperor Nikephoros II (c. 912–969).[2][3][4][5]

Holy Roman Emperor Otto the Great had requested a Byzantine princess for his son, Otto II, to seal a treaty between the Holy Roman Empire and the Eastern Roman Empire. A reference by the Pope to Emperor Nikephoros II as "Emperor of the Greeks" in a letter [6] while Otto's ambassador, Bishop Liutprand of Cremona, was at the Byzantine court, had destroyed the first round of negotiations.[7] With the ascension of John I Tzimiskes, who had not been personally referred to other than as Roman Emperor, the treaty negotiations were able to resume. However, not until a third delegation led by Archbishop Gero of Cologne arrived in Constantinople, were they successfully completed.

According to the Saxon chronicler Bishop Thietmar of Merseburg, Theophanu was not the virgo desiderata, the anticipated imperial princess, as the Ottonian dynasty had marked out Anna Porphyrogenita, a daughter of late Emperor Romanos II. Nevertheless, when Archbishop Gero conducted her to Rome, Emperor Otto knew that he could not refuse the offer. The young princess duly arrived in grand style in 972, with a magnificent escort including Byzantine artists, architects and artisans, and bearing great treasure. 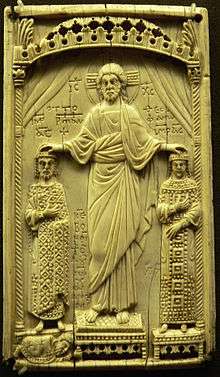 Theophanu and Otto were married by Pope John XIII on April 14, 972 at Saint Peter's and she was crowned empress the same day in Rome. Their children were:

Otto II succeeded his father on 8 May 973. Theophanu accompanied her husband on all his journeys, and she is mentioned in ca. one quarter of the emperor's formal documents, evidence of her privileged position, influence and interest in affairs of the empire. It is known that she was frequently at odds with her mother-in-law, Adelaide of Italy, which caused an estrangement between Otto II and Adelaide. According to Abbot Odilo of Cluny, Adelaide was very happy when "that Greek woman" died.

The Benedictine chronicler Alpert of Metz describes Theophanu as being an unpleasant and talkative woman. Theophanu was also criticized for her decadence, which manifested in her bathing once a day and introducing luxurious garments and jewelry into Germany. She is credited with introducing the fork to Western Europe - chronographers mention the astonishment she caused when she "used a golden double prong to bring food to her mouth" instead of using her hands as was the norm." The theologian Peter Damian even asserts that Theophanu had a love affair with John Philagathos, a Greek monk who briefly reigned as Antipope John XVI.

Otto II died suddenly on 7 December 983 at the age of 28, probably from malaria. His three-year-old son, Otto III, had already been appointed King of the Romans during a diet held on Pentecost of that year at Verona. At Christmas, Theophanu had him crowned by the Mainz archbishop Willigis at Aachen Cathedral, with herself ruling as Empress Regent on his behalf. Upon the death of Emperor Otto II, Bishop Folcmar of Utrecht released his cousin, the Bavarian duke Henry the Quarrelsome from custody. Duke Henry allied with Archbishop Warin of Cologne and seized his nephew Otto III in spring 984, while Theophanu was still in Italy. Nevertheless he was forced to surrender the child to his mother, who was backed by Archbishop Willigis of Mainz and Bishop Hildebald of Worms. 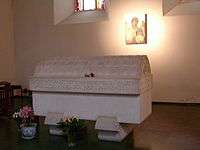 Theophanu officially took over regency in May 985 and reigned the Holy Roman Empire until her death in 991, including the lands of Italy and Lotharingia. By her prudent policies, she also was able to conclude peace with Duke Henry's former supporter Duke Mieszko I of Poland and to safeguard her minor son's interests. However, her ability to rule was hindered by a serious and life-threatening illness in the summer of 988. The illness damaged her health in the long term. Like the Byzantine empress regnants Irene of Athens (752–803) and Theodora (815–867), who also had ruled for their minor sons, she issued diplomas in her own name as imperator augustus, "Emperor", the years of her reign counted from the accession of her husband in 972.

By the winter of 990, Theophanu's health had significantly worsened. She eventually died at Nijmegen and was buried in the Church of St. Pantaleon near her wittum in Cologne. The chronicler Thietmar eulogized her as follows: "Though [Theophanu] was of the weak sex she possessed moderation, trustworthiness, and good manners. In this way she protected with male vigilance the royal power for her son, friendly with all those who were honest, but with terrifying superiority against rebels."

Because Otto III was still a child, his grandmother Adelaide of Italy took over the regency until Otto III became old enough to rule on his own.