Theory of a Deadman

Theory of a Deadman is a Canadian rock band from Delta, British Columbia. Formed in 2001, the band is currently signed to Roadrunner Records as well as 604 Records. The band also includes traits of other music styles, such as country and acoustic, as well as their post-grunge and alternative rock base. They have had a total of eight top 10 hits on the US Billboard Hot Mainstream Rock Tracks chart, including two No. 1 hits, "Bad Girlfriend" , "Lowlife".

Theory of a Deadman became the first act to sign with Nickelback frontman Chad Kroeger's 604 Records imprint in 2001. Tyler Connolly (vocals, guitar; born August 26, 1975) reportedly slipped a copy of the band's demo (which would become the song "Invisible Man") to Kroeger at a post-concert party and the two were soon collaborating on songs together. They released their eponymous debut album Theory of a Deadman on September 17, 2002. The name of the band comes from a song from their first album, whose lyrics describe a man preparing to commit suicide. That track was renamed to "The Last Song".[1]

On March 29, 2005, Theory of a Deadman released their second album, Gasoline. After the release of the album, the band toured with Shinedown and No Address. Starting on March 1, 2005, Theory began a promotional tour, headlined by Breaking Benjamin and The Exies. Songs from Gasoline appeared in the soundtrack of the 2005 video game Fahrenheit, which was released under the title Indigo Prophecy in the United States.

On April 1, 2008, Theory of a Deadman released their third album, Scars & Souvenirs, from which they released eight singles: "So Happy", "By the Way", "Little Smirk", "Bad Girlfriend", "All or Nothing", "Hate My Life", "Not Meant to Be", and "Wait for Me". The song "By the Way" features vocals from Chris Daughtry and Robin Diaz. On April 6, 2008, they appeared at the Juno Awards in Calgary, Alberta, after making various stops across Canada in a promotion known as Journey to the Junos.

Theory also performed in the 96th Grey Cup halftime show, along with Suzie McNeil and Andree Watters, on November 23, 2008.[4] Along with Hinder, they supported Mötley Crüe during the 2008/2009 tour. They also played at Crüe Fest 2.[5]

Total Nonstop Action used Theory of a Deadman's song "Got it Made", from the album Scars & Souvenirs, for their special 2008 year review video.[6] The song later went on to be used by Sun Sports for Miami Heat post-game video recaps during the 2010-11 season. It was also used in the NASCAR 09 video game.

In late 2010, it was announced that the band would start recording their fourth studio album, which was projected to be released in mid-2011.[8] It was then confirmed by Tyler Connolly, that the band's fourth album would be released on July 12, 2011.[9] The first single from the album, "Lowlife", was released on May 17, 2011.[10] The title of the upcoming album was announced to be The Truth Is...[11]

In 2011, Theory co-headlined the second annual Carnival of Madness Tour with Alter Bridge. The supporting bands were Black Stone Cherry, Adelitas Way, and Emphatic. The band contributed a new song, which was co-written with The Exies singer Scott Stevens, called "Head Above Water", to the Transformers: Dark of the Moon soundtrack, which was released on June 14, 2011. Another track titled "Drag Me to Hell" was made available for free through the official Roadrunner Records website on June 16, 2011.[12] The second official single, "Out Of My Head", was released on June 14, 2011.

On November 9, 2013, it was confirmed via Theory's Twitter page that pre-production on their fifth album had started. On January 29, 2014, they stated that they were "finishing up record number 5 next week" with release dates and news soon to come. On April 7, 2014, Theory announced that a new single, "Drown", would be released on April 22, with their new album, titled Savages released July 29.[13] The song "Panic Room" from the album would serve as the theme song for WWE's October pay-per-view Hell in a Cell.[14]

On 11 November 2016, the band released a cover of the song "Hallelujah" by Leonard Cohen, a tribute to his death on the 7th of the same month. [15] 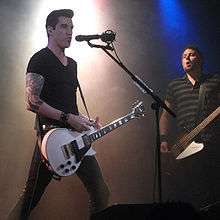 Juno Awards are presented by the Canadian Academy of Recording Arts and Sciences. Theory of a Deadman has received one award and two other nominations.[16]

"Not Meant to Be," written by band members Connolly, Brenner, and Back (along with Kara DioGuardi), was named a 2010 BMI Pop Awards Award-Winning Song.[20]