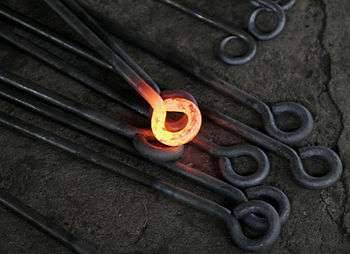 Thermal radiation in visible light can be seen on this hot metalwork. Thermal energy would ideally be the amount of heat required to warm the metal to its temperature, but this quantity is not well-defined, as there are many ways to obtain a given body at a given temperature, and each of them may require a different amount of total heat input. Thermal energy, unlike internal energy, is therefore not a state function.

Relation to heat and internal energy

Heat is energy transferred spontaneously from a hotter to a colder system or body.[2][3] Heat is energy in transfer, not a property of the system; it is not contained within the boundary of the system.[2] On the other hand, internal energy is a property of a system, and exists on both sides of a boundary. In an ideal gas, the internal energy is the statistical mean of the kinetic energy of the gas particles, and it is this kinetic motion that is the source and the effect of the transfer of heat across a system boundary. The internal energy of an ideal gas can in this sense be regarded as "thermal energy". In this case, however, thermal energy and internal energy are identical.

Systems that are more complex than ideal gases (such as real gases) can undergo phase transitions. Phase transitions can change the internal energy of the system without changing its temperature. Therefore, the thermal energy cannot be defined solely by the temperature. Thermal energy also cannot be defined by the difference between the internal energy and the net heat transfer in or out of the system, because it is easy to construct thermodynamic cycles where the system begins and ends in exactly the same state, but there is a net flow of heat in or out during the cycle.

For these reasons, the concept of the thermal energy of a system is ill-defined and is not used in thermodynamics.

In an 1847 lecture entitled On Matter, Living Force, and Heat, James Prescott Joule characterized various terms that are closely related to thermal energy and heat. He identified the terms latent heat and sensible heat as forms of heat each effecting distinct physical phenomena, namely the potential and kinetic energy of particles, respectively.[4] He describes latent energy as the energy of interaction in a given configuration of particles, i.e. a form of potential energy, and the sensible heat as an energy affecting temperature measured by the thermometer due to the thermal energy, which he called the living force.