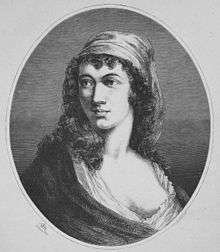 Anne-Josèphe Théroigne de Méricourt (born Anne-Josèphe Terwagne; 13 August 1762–9 June 1817) was a singer, orator and organizer in the French Revolution. She was born at Marcourt (Prince-Bishopric of Liège) (from which comes the appellation "de Méricourt"), a small town in Luxembourg province, in modern Belgium. She is known both for her portrayal in the French Revolutionary press and for her subsequent mental breakdown and institutionalization.

She was born Anne-Josèphe Terwagne in Marcourt, Rendeux, to Pierre Terwagne (b. 1731) and Anne-Élisabeth Lahaye (1732–1767). Her mother died after giving birth to her third child, leaving Anne-Josèphe alone with her father and two brothers. An aunt who lived in Liège took Anne-Josèphe in and trained her as a seamstress and servant.[1] Unhappy with her situation, Anne-Josèphe left home and worked as a cowherd, seamstress, and governess, before becoming a singer and courtesan.

Between 1784 and 1789, she traveled between France, England, and Italy, pursuing her musical career. She had a number of romantic involvements, and was briefly under the tutelage of the well-known castrato Giusto Fernando Tenducci.[2] Though she never acknowledged any children, it is possible that she was the mother of a daughter, Françoise-Louise, who died in April 1788.[3] In May 1789, she traveled from Italy to Paris, where she became swept up in the early stirrings of the Revolution.

Fact and fiction in the French Revolution

Beginning in November 1789, the Parisian royalist press began to construct a flamboyant and infamous caricature of Théroigne as a "patriots' whore" and "female war chief."[4] According to the pages of these pamphlets, she had assaulted the Bastille and led the October Days march on Versailles; she fought soldiers and was "ever to be found where the unrest was greatest," attired in a "scarlet riding-habit and... black plume."[4] She was also portrayed as a shameless libertine who was sexually involved with "Deputy Populus" ("the people")[5] and one tabloid wrote that "every representative [of the National Assembly] may fairly claim to be the father of her child."[5] The history of this fictional Théroigne came to overshadow and confuse her actual actions during this time. By her own account, she was not present at the fall of the Bastille, nor did she march on Versailles during the October Days; rather, she had lived at Versailles throughout the summer of 1789, attending debates at the National Assembly and meeting with political figures such as Jérôme Pétion, Camille Desmoulins, and the Abbé Sieyès.[6] She did indeed, while at Versailles, dress in a man's riding habit, but she did not lead any insurrectionary actions.

In January 1790 she founded, along with Gilbert Romme, the Société des amis de la loi ("Society of Friends of the Law"), a club that sought to encourage and assist patriotic work in the provinces.[7] The club was short-lived, and Théroigne turned her revolutionary zeal into oratory at the Club des Cordeliers and the terraces of the National Assembly. Frustrated by the minimal opportunities available to female patriots, she supported the formation of mixed-sex and women's patriotic clubs.

In May 1790, impoverished and much affected by the libels of the royalist press, Théroigne left Paris for Marcourt. After a short stay she proceeded to Liege, in which town she was seized by warrant of the Austrian Government, and conveyed first to Tyrol and thereafter to the Kufstein Fortress, where she was interrogated about her revolutionary activities. The Austrians, influenced by Théroigne's portrayal in the Paris tabloids, attributed to her an exaggerated role in the Revolution. [8] They portrayed her as a subversive "Pythia," a possible spy who had corrupted soldiers with inflammatory rhetoric, threatened the royal family, and instigated the October Days.[9]

Imprisoned, Théroigne suffered from depression, chest illnesses, and migraines. Her interrogator, personally sympathetic to her[10] and realizing that she was neither a spy nor integral to the Revolution, arranged for her to be released to Vienna in autumn 1791.

Return to Paris and 10 August

In January 1792, Théroigne returned to Paris. News of her Austrian captivity had preceded her, and she was welcomed as a hero. On 1 February, she spoke at the Jacobin Club, where she described her ordeal and was lauded as "one of the first Amazons of liberty."[11] Throughout the spring of 1792, she campaigned for women's rights to bear arms, and in March argued for the establishment of a battalion of women who might defend the city. Her recruiting work for this battalion, however, proved unpopular, and she was denounced to the Jacobins for causing unrest in the Faubourg Saint-Antoine.

During the insurrection of 10 August, Théroigne was involved with the death of royalist prisoners at the Place Vendôme. Among the prisoners was the pamphleteer François-Louis Suleau, who, writing for the royalist scandal sheet Actes des apôtres, had been responsible for many of the offensive rumors about Théroigne. Théroigne, upon recognizing him, handed him over to be murdered by the angry crowd. She was later awarded a civic crown for her courage on 10 August.[12]

Affiliation with the Gironde

Théroigne's revolutionary activities remained subdued for the remainder of 1792, though she was often seen at the Jacobins in her riding habit.[13] In early 1793, she composed a series of placards arguing for the active involvement of women in encouraging patriotic duty. Théroigne had, by this point, allied herself with the Girondins, a political faction at odds with the radical Jacobins.

On 15 May, Théroigne was delivering a speech in the Jardin des Tuileries when she was attacked by a group of women allied with the Jacobins. The women, objecting to her pro-Girondin sentiments, stripped her naked and beat her severely.[8] She was rescued by the intervention of Jean-Paul Marat, but suffered afterwards from headaches and mental troubles.

Théroigne's behavior became erratic, and on 20 September 1794, she was certified insane and institutionalized.[14] She was ultimately sent to La Salpêtrière Hospital, where she lived for twenty years, intermittently lucid and speaking constantly about the Revolution. Following a short illness, she died there on 9 June 1817.[15]