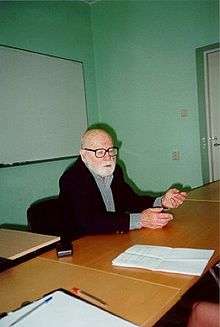 Sebeok, a professor emeritus at Indiana University, expanded the purview of semiotics to include non-human signaling and communication systems, coining the term "zoosemiotics" and raising some of the issues addressed by the philosophy of mind. He was also among the founders of biosemiotics.[7] As a linguist, he published several articles and books analyzing aspects of the Mari language (referring to it by the name "Cheremis"). His transdisciplinary work and professional collaborations spanned the fields of anthropology, biology, folklore studies, linguistics, psychology, and semiotics. He was especially renowned for his ability to bring together specialists from neighboring fields in order to generate path-breaking perspectives on, for example, the study of myth, psycholinguistics, stylistics, animal communication and biosemiotics.

Based on his field of competence, Sebeok rejected the experiments on the putative linguistic abilities of apes, such as those described by David Premack, assuming the existence of a deeper, more universal and more meaningful underlying substrate: the "semiotic function".

In 1944, he became a naturalized citizen of the United States. In 1941, Sebeok earned a bachelor's degree at University of Chicago. He earned a master's degree at University of Chicago in 1943 and, in 1945, a doctorate at Princeton University. In 1943, he arrived at Indiana University in Bloomington, to assist the Amerindianist Carl Voegelin in managing the country's largest Army Specialized Training Program in foreign languages. He then created the university's department of Uralic and Altaic Studies, covering the languages of Eastern Europe, Russia and Asia. He was also the chair of the university's Research Center for Language and Semiotic Studies, retiring in 1991.

Sebeok was the editor-in-chief of the journal Semiotica, the leading periodical in the field, from its establishing in 1969, until 2001.[8] He was also the editor of several book series and path-breaking encyclopedias, including "Approaches to Semiotics" (over 100 volumes), "Current Trends in Linguistics", and the "Encyclopedic Dictionary of Semiotics".

In the early 1980s, Sebeok composed a report for the US Office of Nuclear Waste Management titled Communication Measures To Bridge Ten Millennia,[9] discussing solutions to the problem of nuclear semiotics, a system of signs aimed at warning future civilizations from entering geographic areas contaminated by nuclear waste.[10] The report proposed a "folkloric relay system" and the establishment of an "atomic priesthood" of physicists, anthropologists, semioticians to preserve the true nature of hazardous site.[11]

In addition to his steady intellectual contributions to a number of fields over more than sixty years, Sebeok was a quintessential entrepreneurial scholar, organizing hundreds of international conferences and institutes, playing a key role in organizations such as the Linguistic Society of America, International Association for Semiotic Studies and the Semiotic Society of America, and in supporting the creation of linguistic and semiotics teaching programs and scholarly associations throughout the world.[12]

Sebeok's personal library on semiotics, comprising more than 4,000 volumes of books and 700 journals, is preserved at the Department of Semiotics at the University of Tartu in Estonia.[13]

The "Sebeok fellow" award is the highest honor given by the Semiotic Society of America. The complete list of Sebeok fellows (with year of awarding):