Bloomington is a city in and the county seat of Monroe County in the southern region of the U.S. state of Indiana.[6] It is the seventh-largest city in Indiana and the fourth-largest outside the Indianapolis metropolitan area. According to the Monroe County History Center, Bloomington is known as the "Gateway to Scenic Southern Indiana." The city was established in 1818 by a group of settlers from Kentucky, Tennessee, the Carolinas and Virginia who were so impressed with "a haven of blooms" that they called it Bloomington.[7]

Bloomington has been designated a Tree City for 32 years, as of 2015.[11][12] The city was also the location of the Academy Award-winning 1979 movie Breaking Away, featuring a reenactment of Indiana University's annual Little 500 bicycle race. Monroe County's famous limestone quarries are also featured in the movie. 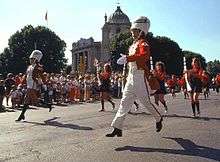 A Fourth of July parade passes the Monroe County courthouse in Bloomington.

Southern Indiana receives an abundance of rain, with a yearly average of nearly 45 inches.

Bloomington is an area of irregular limestone terrain characterized by sinks, ravines, fissures, underground streams, sinking streams, springs and caves.[20] It is situated in the rolling hills of southern Indiana, resting on the intersection of the Norman Uplands and the Mitchell Plain. The relatively varied topography of the city provides a sharp contrast to the flatter terrain more typical of central to northern portions of Indiana.

Bloomington is located on a comparatively high ground, the summit of the divide between the basins of the West Fork and East Fork of Indiana's White River. Accordingly, there are no major watercourses within the city, nor is much groundwater available for wells.[20] The largest stream within the city itself is Clear Creek, with its eastern branch known on the Indiana University campus as Jordan River.

Due to the absence of either natural lakes or rivers or groundwater in or near the city, a number of dams have been constructed on nearby creeks over the last 100 years to provide for the water needs of Bloomington and Monroe County. Early 20th century damming projects occurred at a number of locations southwest of the city, the most notable of them being the Leonard Springs Dam. Unfortunately, due to the limestone formations underlying the reservoirs and the dams, water kept seeping from the reservoirs through naturally developing underground channels. Despite all efforts, the city was never able to fully stop the leakage, and had to resort to pumping leaking water back to the reservoir.[20]

By the 1920s, a more radical solution was needed to deal with the water crisis. A new reservoir, known as Griffy Lake, was constructed in a more geologically suitable area north of the city.[20] (It is now within Bloomington's official city limits.) Later, in the 1950s, two much larger reservoirs, Lake Lemon and Lake Monroe were created in the northeastern and southeastern parts of Monroe County. Monroe Lake was created by the US Army Corps of Engineers for flood control, but has since been used to supply the city and the county with water. The water pumping station at Griffy Lake has been mothballed.[21]

PCB pollution, associated with Westinghouse's operations, long was a concern in the area.[22][23] A number of sites,[24] in particular, Bennett's Dump and Lemon Lane Landfill at the northwestern edge of the city and Neal's Landfill in the county, were listed as Superfund sites. Clean-up operations at the Bennett Quarry site, started in 1983, were largely completed by 2000.,[25] while cleanups at the other sites were completed in 2012. 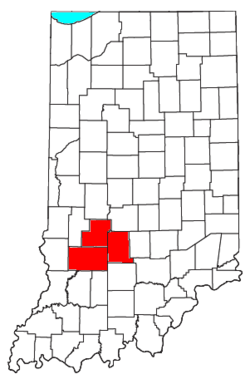 Location of the Bloomington Metropolitan Statistical Area in Indiana

Bloomington is the principal city of the Bloomington Metropolitan Statistical Area, a metropolitan area that covers Greene, Monroe, and Owen counties[27] and had a combined population of 175,506 at the 2000 census.[28]

There were 31,425 households of which 16.6% had children under the age of 18 living with them, 25.3% were married couples living together, 7.5% had a female householder with no husband present, 3.1% had a male householder with no wife present, and 64.1% were non-families. 38.2% of all households were made up of individuals and 7.5% had someone living alone who was 65 years of age or older. The average household size was 2.09 and the average family size was 2.76.

There were 26,468 households out of which 17.9% had children under the age of 18 living with them, 29.2% were married couples living together, 7.8% had a female householder with no husband present, and 60.5% were non-families. 39.1% of all households were made up of individuals and 7.1% had someone living alone who was 65 years of age or older. The average household size was 2.09 and the average family size was 2.76.

The Bloomington and Monroe County region is home to major employers representing a diverse collection of fields, including education, the life sciences, advanced manufacturing and technology.[29]

Bloomington is a regional economic center anchored by Indiana University and home to a diverse business community involved in pharmaceuticals, medical devices, technology, health care, and the arts. Bloomington's concentration of employment in the life sciences is six times greater than the U.S. average, and employment in the technology sector has grown by over 80 percent in recent years.[30]

Bloomington has been recognized by Inc. Magazine as one of "America’s Best Cities for Doing Business" and as one of Entrepreneur Magazine's Top 50 "Hottest Small Cities for Entrepreneurs." Additionally, Forbes Magazine ranked Bloomington No. 3 in its "Best Places for Business Careers" feature.

Bloomington is home to several professional and amateur theater companies, among the most notable are: the Indiana University Dept. of Theatre & Drama; Cardinal Stage Company; the Bloomington Playwrights Project; Theatre of the People; and the Indiana University Auditorium, which is a 3,000-seat performing arts venue which brings in national tours of musicals, plays and other live entertainment.

Bloomington is home to the Buskirk-Chumley Theater, which is a renovated 616 seat vaudeville and movie house built in 1922. Known locally as the "Indiana Theater" or the "Bus-Chum", it was operated until 1995 as a movie theater. In 1995, the building was donated to the community for use as a performing arts center. In 2006, the theater played host to more than 260 public performances. Bloomington also offers artists and entertainers performance space at the Ivy Tech Waldron Arts Center, a community arts center that has hosted hundreds of performances through the last two decades.

Bloomington also has a large folk punk music scene. The town is home to Chris Clavin who runs the DIY punk rock record label Plan-It-X Records and is in the folk punk band Ghost Mice who frequently sing about Bloomington. Every other year Plan-It-X Records organises Plan-it-X Fest, a large DIY punk music festival held in Bloomington. Bloomington is also home to the record labels Eradicator Records, Secretly Canadian, Jagjaguwar and BlueSanct. The Grammy Nominated band The Fray recorded their Triple Platinum debut album How to Save a Life at Echo Park Studios in Bloomington. Bloomington is also the hometown of dark folk rockers Murder By Death. The "Zine" publishing company, Microcosm Publishing, is also located in Bloomington, as is the Lotus Festival of World Music, which occurs each fall.

Much of Bloomington's music originates in the Jacobs School of Music at Indiana University, its Opera Theater and public performances numbering more than a thousand each year.

Downtown Bloomington is typically referred to as the area between First to Eleventh Streets and Madison to Lincoln Streets, with the vast majority of the dining, shopping and drinking establishments being located on the two main north/south thoroughfares of Walnut Street and College Avenue, which run parallel on either side of the courthouse. Portions of this one-way pair, along with segments of the east/west Sixth Street and Kirkwood Avenues, comprise Bloomington's historic courthouse square.

Bloomington and Monroe County's B-Line walking trail, on the site of a former railroad line, bisects the downtown area as well, providing an area for walking, biking, running and hiking.

Bloomington also receives stations from Indianapolis; it is part of the Indianapolis market.

Bloomington is a gold-rated bicycle-friendly community by the League of American Bicyclists. There are many on-street and off-street bicycle facilities, most notably the B-Line trail. Bloomington's somewhat compact land use development style has made it easy and convenient to get from point A to point B by bicycle. A map of bicycle friendly facilities is available on-line or a hard copy is available for free at any of the bicycle shops in town.

Bloomington, for many years was one of the largest cities without an interstate or freeway expressway. However, interstate access finally occurred in December 2015 when the Interstate 69 expansion between Evansville and Indianapolis was completed to Bloomington.

The upgrading of SR 37 from a 4 Lane Highway to Interstate standards for the next section of I-69 between Bloomington and Martinsville is under construction and will be completed by the end of 2017. The last section between Martinsville and Indianapolis is still several years away.

State Road 48 (SR 48) starts as a four-lane highway on the city's west side before narrowing to two-lanes at Oard Rd outside the city limits.