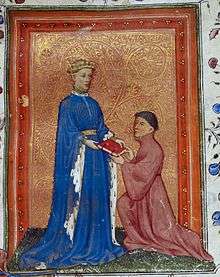 Henry V, while Prince of Wales, presenting Hoccleve's, Regement of Princes to the Duke of Norfolk, 1411-1413, British Library

Hoccleve is thought to have been born in 1368/9, as he states when writing in 1421/2 (Dialogue, 1.246) that he has seen "fifty wyntir and three". Nothing is known of his family, but his name may come from the village of Hockliffe in Bedfordshire.[1] What is known of his life is gleaned mainly from his works and from administrative records. He obtained a clerkship in the Office of the Privy Seal at the age of about twenty.[2] This would require him to know French and Latin. He retained the post on and off, in spite of much grumbling, for about 35 years. He had hoped for a church benefice, but none came. On 12 November 1399, however, he was granted an annuity by the new king, Henry IV.[3] The Letter to Cupid, the first poem of his which can be dated, was a 1402 translation of L'Epistre au Dieu d'Amours of Christine de Pisan, written as a sort of riposte to the moral of Troilus and Criseyde, to some manuscripts of which it is attached. La Male Regle (c. 1406), one of his most fluid and lively poems, is a mock-penitential poem that gives some interesting glimpses of dissipation in his youth.

By 1410 he had married "only for love" (Regiment..., 1.1561) and settled down to writing moral and religious poems. His best-known Regement of Princes or De Regimine Principum, written for Henry V of England shortly before his accession, is an elaborate homily on virtues and vices, adapted from Aegidius de Colonna's work of the same name, from a supposititious epistle of Aristotle known as Secreta secretorum, and a work of Jacques de Cessoles (fl. 1300) translated later by Caxton as The Game and Playe of Chesse. The Regement survives in 43 manuscript copies.[4] It comments much on Henry V's lineage, to cement the House of Lancaster's claim to England's throne. Its incipit is a poem encompassing about a third of the whole, containing further reminiscences of London tavern life in the form of dialogue between the poet and an old man. He also remonstrated with Sir John Oldcastle, a leading Lollard, calling on him to "rise up, a manly knight, out of the slough of heresy."

The Series, which combines autobiographical poetry, poetic translations, and prose moralizations of the translated texts, begins with a description of a period of "wylde infirmitee" in which the Hoccleve-character claims he temporarily lost his "wit" and "memorie" (this stands as the earliest autobiographical description of mental illness in English).[5] He describes recovering from this "five years ago last All Saints" – 1 November 1414 (Complaint, 11.55–6) – but nevertheless still experiences extreme social alienation as a result of gossip about this period of insanity.[4] The Series continues with the "Dialog with a Friend," which claims to be written after his recovery and gives a pathetic picture of a poor poet, now fifty-three, with sight and mind impaired; in it he tells the unnamed friend about his plans to write a tale he owes his good patron, Humphrey of Gloucester, and of translating a portion of Henry Suso's popular Latin treatise on the art of dying (a task the friend discourages him from, pointing out that too much study was the cause of his mental illness).[6] The Series then fulfills this plan, continuing with his moralized tales of Jereslau's Wife and of Jonathas (both from the Gesta Romanorum). The Series next turns to the Learn to die, a theologically and psychologically astute verse translation of Henry Suso's Latin prose Ars Moriendi (Book II, Chapter 2 of the Horologium Sapientiae).[7] Two autograph manuscripts of the Series survive.[8]

In addition to writing his own poetry, Hoccleve seems to have supplemented the income from his Privy Seal clerkship by working as a scribe. He may, in this capacity, have been a colleague of Adam Pinkhurst, tentatively identified as Chaucer's scribe, and prolific copyist Scribe D, as the hands of all three appear together in the same manuscript.[9] He also compiled a formulary of more than a thousand model Privy Seal documents in French and Latin for the use of other clerks.[10]

On 4 March 1426 the Exchequer issue rolls record a last reimbursement to Hoccleve (for red wax and ink for office use). He died soon after. On 8 May 1426 his corrody at Southwick Priory was granted to Alice Penfold to be held "in manner and form like Thomas Hoccleve now deceased".[4]

Like his more prolific and better known contemporary John Lydgate, he is a key figure of 15th-century English literature. While for much of the 20th century their work was little valued, it is now recognized as providing a wealth of insight into the literate culture of England under the Lancastrian regime. It represented for the 15th century the literature of their time, keeping alive the innovations to vernacular poetics originally made by their "maister" Geoffrey Chaucer, to whom Hoccleve pays an affectionate tribute in no fewer than three passages in his De Regimine Principum.

The main interest for us in Hoccleve's poems is that they are characteristic of his time. His hymns to the Virgin, ballades to patrons, complaints to the king and the kings treasurer, versified homilies and moral tales, with warnings to heretics like Oldcastle, are illustrative of the blight that had fallen upon poetry on the death of Chaucer. The nearest approach to the realistic touch of his master is to be found in Hoccleve's Male Regle. Compared to Lydgate and his humorous 'London Lickpenny', these pictures of 15th-century London are quite a bit more serious and ruminating about a civil servant's place in an unstable Lancastrian bureaucracy. 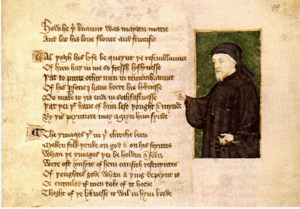 Portrait of Chaucer from Hoccleve's Regement (or Regiment) of Princes

Yet Hoccleve claimed to know the limits of his powers. His diction is relatively simple and straightforward, and as a metrist he is highly self-deprecating. While he confesses that "Fader Chaucer fayn wolde han me taught, But I was dul and learned lite or naught," this pose was highly conventional in 15th-century poetry, and was indeed an inheritance from Chaucer himself, whose alter-ego Geoffrey was portrayed as fat and dimwitted in both the "House of Fame" and The Canterbury Tales. Later known as the "humility topos", this posture would become one of the conventional forms of authorial self-presentation in the Renaissance. The seminal piece of scholarship on this self-effacing performance typical of 15th-century writers is David Lawton's 1987 ELH article Dullness and the Fifteenth Century.

The scansion of his verses seems occasionally to require, in French fashion, an accent on an unstressed syllable. Yet his seven-line (or rime royale) and eight-line stanzas, to which he limited himself, are perhaps more reminiscent of Chaucer's rhythm than are Lydgate's.

A poem, Ad beatam Virginem, generally known as Mother of God and once attributed to Chaucer, is copied among Hoccleve's works in manuscript in Phillipps 8151 (Cheltenham), and so may be regarded as his work. Hoccleve found an admirer in the 17th century in William Browne, who included his Jonathas in Shepheard's Pipe (1614). Browne added a eulogy of the old poet, whose works he intended to publish in their entirety (Works, ed. WC Hazlitt, 1869, ii. f96-198). In 1796 George Mason printed Six Poems by Thomas Hoccleve never before printed ...; De Regimine Principum was printed for the Roxburghe Club in 1860, and by the Early English Text Society in 1897. (See Frederick James Furnivall's introduction to Hoccleve's Works; I. The Minor Poems, in the Phillipps manuscript 8131, and the Durham manuscript III. p, Early English Text Society, 1892.)

Furnivall's edition of Hoccleve's complete works is still largely the standard of current scholarship and was reprinted in the 1970s, though Michael Seymour's Selections from Hoccleve, published by Clarendon Press (a division of Oxford U.P.) in 1981, provides an excellent sampling of the poet's major and minor works for readers just trying to get the sense of Hoccleve's work. J.A. Burrow's 1999 EETS edition of Thomas Hoccleve's Complaint and Dialogue is fast becoming the standard edition of these two excerpts from the Hoccleve's later works (now collectively known as The Series), as is Charles Blyth's TEAMS Middle English Text Series edition of The Regiment of Princes from the same year – particularly for its spelling modernization, which makes it easier to use in the classroom. These three recent editions all contain excellent introductions which can give readers a more thorough sense of the significance of this poet, who has until recently been under-appreciated.