William Caxton (c. 1422 – c. 1491) was an English merchant, diplomat, writer and printer. He is thought to be the first Englishman to introduce a printing press into England, in 1476, and was the first English retailer of printed books.

His parentage and date of birth are both not known for certain, but he may have been born between 1415 and 1424, in the Weald of Kent, perhaps in Hadlow or Tenterden. In 1438 he was apprenticed to Robert Large, a wealthy London mercer. Little else is known of his early life.

In Bruges by 1450 and settled there by 1453, Caxton eventually became successful in business and governor of the Company of Merchant Adventurers of London. During his business travels, he observed the new printing industry in Cologne which led to him to start a printing press in Bruges, in collaboration with Colard Mansion. The first book in English, Recuyell of the Historyes of Troye, was produced there in 1473.

Caxton set up a press at Westminster in 1476. The first book known to have been produced there was an edition of Chaucer's The Canterbury Tales . He printed perhaps the earliest verses of the Bible to be printed in English, as well as chivalric romances, classical works and English and Roman histories. He translated into English and edited many of the works himself. He is credited with the first English translation of Aesop's Fables , in 1484. The rushed publishing schedule and his inadequacies as a translator led both to wholesale transfers of French words into English and to misunderstandings. Caxton is credited with helping to standardise the various dialects of English through his printed works.

Caxton's family have been "fairly certainly" found to be his parents, Philip and Dionisia, and a brother, Philip.[1] His date of birth is unknown. Records place it in the region of 1415–1424, based on the fact that his apprenticeship fees were paid in 1438. Caxton would have been 14 at the date of apprenticeship, but masters often paid the fees late. In the preface to his first printed work The Recuyell of the Historyes of Troye, he claims to have been born and educated in the Weald of Kent.[2] Oral tradition in Hadlow claims that Caxton was born there; the same with Tenterden.[1] One of the manors of Hadlow was Caustons, owned by the Caxton (De Causton) family.[2] A house in Hadlow reputed to be the birthplace of William Caxton was dismantled in 1936 and incorporated into a larger house rebuilt in Forest Row, East Sussex.[1] Further evidence for Hadlow is that various place names nearby are frequently mentioned by Caxton.[2]

Caxton was in London by 1438, when the registers of the Mercers' Company record his apprenticeship to Robert Large, a wealthy London mercer or dealer in luxury goods, who served as Master of the Mercer's Company, and Lord Mayor of London in 1439. After Large died in 1441, Caxton was left a small sum of money (£20). As other apprentices were left larger sums, it would seem that he was not a senior apprentice at this time. 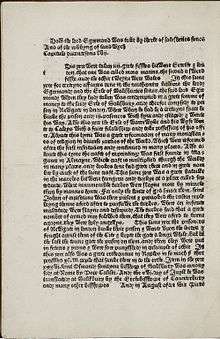 A page from the Brut Chronicles (printed as the Chronicles of England), printed in 1480 by Caxton

Caxton was making trips to Bruges by 1450 at the latest and had settled there by 1453, when he may have taken his Liberty of the Mercers' Company. There he was successful in business and became governor of the Company of Merchant Adventurers of London. His trade brought him into contact with Burgundy and it was thus that he became a member of the household of Margaret, Duchess of Burgundy, the third wife of Charles the Bold and sister of two Kings of England: Edward IV and Richard III. This led to more continental travel, including travel to Cologne, in the course of which he observed the new printing industry and was significantly influenced by German printing. He wasted no time in setting up a printing press in Bruges, in collaboration with a Fleming named Colard Mansion, and the first book to be printed in English was produced in 1473: Recuyell of the Historyes of Troye, a translation by Caxton himself. His translation had become popular in the Burgundian court, and requests for copies of it were the stimulus for him to set up a press.[3] 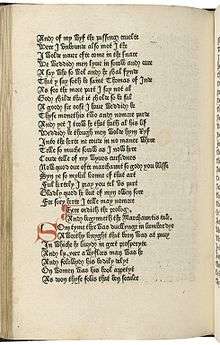 Bringing the knowledge back to England, he set up a press at Westminster in 1476. The first book known to have been produced there was an edition of Chaucer's The Canterbury Tales (Blake, 2004–07). Another early title was Dictes or Sayengis of the Philosophres (Sayings of the Philosophers), first printed on 18 November 1477, translated by Earl Rivers, the king's brother-in-law. Caxton's translation of the Golden Legend (1483) and The Book of the Knight in the Tower (1484) contain perhaps the earliest verses of the Bible to be printed in English. He produced the first translation of Ovid's Metamorphoses in English.[4]

Caxton produced chivalric romances (such as Fierabras), the most important of which was Sir Thomas Malory's Le Morte d'Arthur (1485); classical works; and English and Roman histories. These books appealed to the English upper classes in the late fifteenth century. Caxton was supported by (but not dependent on) members of the nobility and gentry. 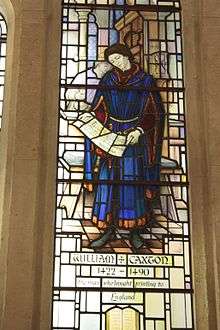 Caxton's precise date of death is uncertain, but estimates from the records of his burial in St. Margaret's, Westminster, suggest that he died near March 1492. However, George D. Painter makes numerous references to the year 1491 in his book William Caxton: a biography as the year of Caxton's death, since 24 March was the last day of the year according to the calendar used at the time, so the year-change hadn't happened yet. Painter writes, "However, Caxton's own output reveals the approximate time of his death, for none of his books can be later than 1491, and even those which are assignable to that year are hardly enough for a full twelve months' production; so a date of death towards autumn of 1491 could be deduced even without confirmation of documentary evidence." (p. 188)

In November 1954, a memorial to Caxton was unveiled in Westminster Abbey by J. J. Astor, chairman of the Press Council. The white stone plaque is on the wall next to the door to Poets' Corner. The inscription reads:

"Near this place William Caxton set up the first printing press in England."[5]

Caxton and the English language

Caxton printed 80 percent of his works in the English language. He translated a large number of works into English, performing much of the translation and editing work himself. He is credited with printing as many as 108 books, 87 of which were different titles, including the first English translation of Aesop's Fables (1484). Caxton also translated 26 of the titles himself. His major guiding principle in translating was an honest desire to provide the most linguistically exact replication of foreign language texts into English, but the hurried publishing schedule and his inadequate skill as a translator often led to wholesale transference of French words into English and numerous misunderstandings.[6] 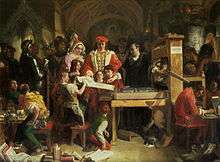 Caxton showing the first specimen of his printing to King Edward IV and Queen Elizabeth at the Almonry, Westminster (painting by Daniel Maclise)

The English language was changing rapidly in Caxton's time and the works that he was given to print were in a variety of styles and dialects. Caxton was a technician rather than a writer, and he often faced dilemmas concerning language standardisation in the books that he printed. (He wrote about this subject in the preface to his Eneydos.[7]) His successor Wynkyn de Worde faced similar problems.

Caxton is credited with standardising the English language through printing—that is, homogenising regional dialects. This facilitated the expansion of English vocabulary, the regularisation of inflection and syntax, and a widening gap between the spoken and the written word. Richard Pynson started printing in London in 1491 or 1492 and favoured Chancery Standard. Pynson was a more accomplished stylist than Caxton and consequently pushed the English language further toward standardisation.[8]

It is asserted that the spelling of "ghost" with the silent letter h was adopted by Caxton due to the influence of Flemish spelling habits.[9] 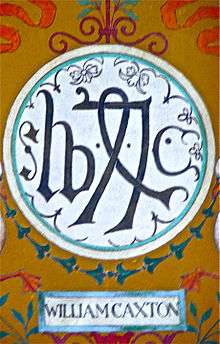 Works published by Caxton from the Rare Book and Special Collections Division at the Library of Congress: