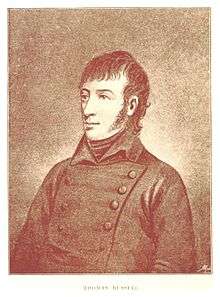 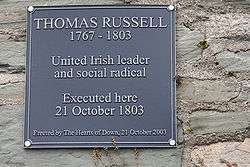 Thomas Paliser Russell (21 November 1767 – 21 October 1803) was a co-founder and leader of the United Irishmen. He was executed for his part in Robert Emmet's rebellion in 1803.

Born in Dromahane, County Cork to an Anglican family, he joined the British army in 1783 and served in India. He returned to Ireland in 1786 and commenced studies in science, philosophy and politics. in July 1790 he met Theobald Wolfe Tone in the visitor's gallery in the Irish House of Commons and they became firm friends.

In 1790 Russell resumed his military career as a junior officer in the 64th Regiment of Foot and was posted to Belfast. With its thriving linen and textile industries and mercantile community, Belfast was called the "Athens of the North." As an officer of the garrison, Russell had access to the newly emerging professional and business class, many of whose members were radicals (being Presbyterians) excluded from the Ascendancy.

The French Revolution in 1789 was warmly greeted in Belfast as were its ideals of liberty, equality, and fraternity. With his keen mind and radical ideas, Russell soon became a confidante of Henry Joy McCracken, James Hope, Samuel Neilson and others who were to play a prominent role in the United Irish movement. With them he developed ideas of parliamentary reform, to include the bulk of the people, and Catholic emancipation.

Russell left the army in July 1791 and attended a convention of the Whig Club in Belfast to mark Bastille Day. The convention was addressed by William Drennan, who proposed a brotherhood that would "go further than speculate or debate … and come to grips with practicalities", promoting separation from England and co-operation with the increasingly radical Catholic Committee in the pursuit of political and social reforms. However, Russell noted the lack of trust between Dissenters and Catholics which was due to fears that Catholic radicalism could be bought off by religious concessions. Informing Wolfe Tone of his observations, who within weeks published his "Argument on Behalf of the Catholics of Ireland" to address these suspicions. The pamphlet was extremely well received and provided the impetus for the founding of the Society of United Irishmen in Belfast on 18 October 1791 whose initial aims were constitutional reform, union among the Irish people and the removal of all religious disqualifications. 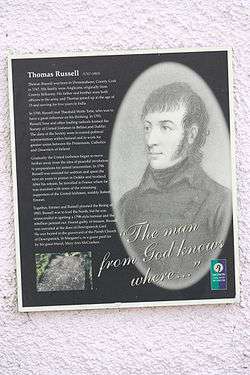 Information at Down County Museum, Downpatrick, County Down, August 2009

In January 1794, Russell took the post of librarian at the Belfast Society for Promoting Knowledge, later to become the Linen Hall Library. His position as librarian allowed Russell to continue to develop ideas for the emancipation of the Irish people although by now the British authorities in Dublin were becoming increasingly aware of his and others activities and beliefs. Pressure from Dublin Castle would later force the United Irish movement to become a clandestine organisation as the would-be revolutionaries sought to continue their slow progress towards challenging the occupying British.

In 1795 Russell, Wolfe Tone, Henry Joy McCracken and Samuel Neilson as they led a band of United Irishmen to the top of Cavehill overlooking the town of Belfast where they swore an oath "never to desist in our effort until we had subverted the authority of England over our country and asserted her independence" prior to Wolfe Tone's exile to America. The event was noted in Dublin Castle although there was to be no immediate move to disband or arrest the members of the United Irishmen.

In 1796, Russell published an ambitious and far-sighted document, Letter to the People of Ireland, which laid out his vision of social and economic reform for the Irish nation. In addition to his stance on religious freedom, he had made clear his anti-slavery views, in the Northern Star on 17 March 1792 whose editorial comment took a less generous view by agreeing with Russell but pointing out the immediate necessity to liberate three million slaves in Ireland. The veteran anti-slavery campaigner, Mary Ann McCracken, sister of Henry Joy, remembered that as a young officer in Belfast Russell had ' abstained from the use of slave labour produce until slavery in the West Indies was abolished, and at the dinner parties to which he was so often invited and when confectionery was so much used he would not take anything with sugar in it . . .'

Russell took an active part in organising the Society of United Irishmen which spread rapidly assisted by their newspaper, the Northern Star , becoming the United Irish commander in County Down. However the outbreak of war with revolutionary France and England in 1793 had led to an ongoing campaign against the United Irishmen and in 1796 Russell was arrested and imprisoned as a "state prisoner" (i.e. held without trial) in Dublin missing out in participation in the 1798 rising as a result. In March 1799 he, and the other state prisoners were transferred to Fort George in Scotland, an extensive fortress some miles north of Inverness built in the wake of the failed Jacobite rebellion of 1745-46. He was released on condition of exile to Hamburg in June 1802 following a brief cessation in the war with France.

Not content to sit things out in Hamburg, Russell soon made his way to Paris where he met Robert Emmet who was planning another insurrection pending the French renewal of the war against England. Russell agreed to return to Ireland in March 1803 to organise the North in conjunction with the veteran of the battle of Antrim, James Hope. However he met with little success as much of the north was subdued following the suppression of the 1798 rebellion and displayed little appetite for a renewed outbreak. Finally finding some support in the vicinity of Loughinisland, Russell prepared to take to the field on 23 July 1803, the date set by Emmett for the rebellion to begin.

However the plan was badly thought out and quickly collapsed forcing Russell to flee to Dublin before a shot was fired in anger. Russell managed to hide for a number of weeks but Dublin was a bad place to hide in the days following the failure of Emmett's rebellion as the shocked authorities had launched a massive campaign of raids and arrests in an effort to finally eradicate the United Irishmen. He was promptly arrested and sent to Downpatrick Gaol where he was executed by hanging then beheaded on 21 October 1803.