Sir Timothy Miles Bindon "Tim" Rice (born 10 November 1944) is an English author and Academy Award, Golden Globe Award, Tony Award, and Grammy Award-winning lyricist. He is best known for his collaborations with Andrew Lloyd Webber, with whom he wrote Joseph and the Amazing Technicolor Dreamcoat, Jesus Christ Superstar, and Evita; with Björn Ulvaeus and Benny Andersson of ABBA, with whom he wrote Chess; for additional songs for the 2011 West End revival of The Wizard of Oz; and for his work for Walt Disney Studios with Alan Menken (Aladdin, Beauty and the Beast, King David), Elton John (The Lion King, Aida, The Road to El Dorado) and Ennio Morricone.

One of the most celebrated lyricists in British popular culture, Rice was knighted by Elizabeth II for services to music in 1994. He has a star on the Hollywood Walk of Fame, is an inductee into the Songwriter's Hall of Fame, is a Disney Legend recipient, and is a fellow of the British Academy of Songwriters, Composers and Authors. The 2016 Sunday Times Rich List values Rice at £150m; the 15th richest music millionaire in the UK.[1]

Rice was born at Shardeloes, an historic English country house near Amersham, Buckinghamshire, England that was requisitioned as a maternity hospital during the Second World War. His father Hugh Gordon Rice served with the Eighth Army and reached the rank of major during the Second World War, while his mother Joan Odette (née Bawden) served in the Women's Auxiliary Air Force (WAAF) as a photographic interpreter.[2][3] After the war, they worked for the de Havilland Aircraft Company. 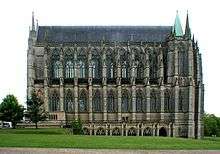 Rice was educated at three independent schools: Aldwickbury School in Hertfordshire, St Albans School and Lancing College. He left Lancing with GCE A-Levels in History and French and then started work as an articled clerk for a law firm in London, having decided not to apply for a university place.[4] He later attended the Sorbonne in Paris for a year.

After studying for a year in Paris at the Sorbonne, Rice joined EMI Records as a management trainee on 6 June 1966. When EMI producer Norrie Paramor left to set up his own organisation in 1968, Rice joined him as an assistant producer, working with, among others, Cliff Richard.

Rice has collaborated with Andrew Lloyd Webber, with whom he wrote Joseph and the Amazing Technicolor Dreamcoat, Jesus Christ Superstar, Evita, Cricket, and The Likes of Us. For The Walt Disney Company, Rice has collaborated individually with Alan Menken and Elton John, creating productions including Aladdin (winning an Academy Award, Golden Globe and Grammy Award for Song of the Year for the song "A Whole New World") and The Lion King (winning the Golden Globe and Academy Award for Best Original Song for "Can You Feel the Love Tonight"). In 1996, his collaboration with Lloyd Webber for the film version Evita won Rice his third Academy Award for Best Original Song with the song "You Must Love Me". Rice has also collaborated with Björn Ulvaeus and Benny Andersson of ABBA on Chess and with Rick Wakeman on the albums 1984 and Cost of Living. He is writing eight lyrics to Pyotr Ilyich Tchaikovsky's ballet, The Nutcracker. The working title is The Nutcracker: The Untold Story.[5]

Rice was re-united with Andrew Lloyd Webber in 2011 to pen new songs for Lloyd Webber's newest production of The Wizard of Oz which opened in March 2011 at the London Palladium. Rice has, however, rejected working with Webber again, claiming their partnership has run its course, and they are "no longer relevant as a team".[6]

He has also been a frequent guest panellist for many years on the radio panel games Just a Minute and Trivia Test Match. Rice often jokes that he is most recognised in America for his appearance in the film About a Boy. The film includes several clips from an edition of the game show Countdown on which he was the guest adjudicator. His other interests include cricket (he was President of the MCC in 2002) and maths. He wrote the foreword to the book Why Do Buses Come In Threes by Rob Eastaway and Jeremy Wyndham, and featured prominently in Tony Hawks's One Hit Wonderland, where he co-wrote the song which gave Hawks a top twenty hit in Albania.

On 2 December 2010 he addressed the eighth Bradman Oration in Adelaide.

In October 2011, November and December 2016, Rice was guest presenter for the BBC Radio 2 show Sounds of the '60s, standing in for regular presenter Brian Matthew who was unwell.[7]

He released his autobiography Oh What a Circus: The Autobiography of Tim Rice in 1998, which covered his childhood and early adult life until the opening of the original London production of Evita in 1978. He is currently working on a sequel, covering his life and career since then.

Along with his brother Jo and the radio presenters Mike Read and Paul Gambaccini, he was a co-founder of the Guinness Book of British Hit Singles and served as an editor from 1977 to 1996. In September 1981, Rice, along with Colin Webb and Michael Parkinson, launched Pavilion Books, a publishing house with a publishing focus on music and the arts. He held it until 1997.[9][10]

He is a fellow of the British Academy of Songwriters, Composers and Authors.[14]

Rice married Jane McIntosh on 19 August 1974, the couple having met while working at Capital Radio. The marriage dissolved in the late 1980s after the British tabloid newspapers revealed that he had been conducting an affair with actress/singer Elaine Paige.[15][16][17] Jane retains the title Lady Rice as, despite obtaining a divorce decree nisi, Sir Tim never made it absolute and therefore they remain technically married.

Lady Rice manages the family's 33,000-acre Dundonnell estate which Sir Tim bought in 1998 for £2 million. She has won awards for her conservation work with red squirrels.[18] They have two children, Eva, a novelist and singer/songwriter, and Donald, a film director who also helps to run Dundonnell. Eva, who was named after Eva Perón, is the author of the novel The Lost Art of Keeping Secrets, which was a finalist for the British Book Award Best Read of the Year. Sir Tim also has a daughter from another relationship with Nell Sully, an artist,[19][20] His love life remains colourful with a relationship with the cricketer Isabelle Duncan ending; a daughter, Charlotte, born 12th Oct 2016 {www.pressreader.com/uk/the-mail-on-sunday/20161016/} with writer Laura-Jane Foley[21] and a friendship with another writer and photographer Amanda Eliasch, all whilst remaining married.

He was also a supporter of the Conservative Party, but in 2007 stated that the Conservatives were no longer interested in him and that his relationship with the Party had "irrevocably changed."[22] He was reported in early 2014 to be a donor for the UK Independence Party [23] However, he has since stated in an interview for Chat Life that the article was referring to a one off payment that he made at a dinner event held by the party around two years earlier advocating opposition to wind turbine construction, and that he was not a member or regular donor to any political party.

Despite his disenchantment with the Conservative Party, Rice joined Andrew Lloyd Webber, both supporters of Margaret Thatcher, at her funeral in 2013.[24]

Describing his religion, Rice has stated, “Technically I'm Church of England, which is really nothing. But I don't follow it. I wouldn't say I was a Christian. I have nothing against it." Conversely, he also stated that he adapted the biblical stories of Joseph and Jesus to musicals because "I'd always rather take a true story over an untrue one."[25]

Rice supports Sunderland association football club.[26] He was awarded an honorary doctorate of letters by the University of Sunderland at a ceremony at the Stadium of Light in November 2006.[27]

Rice runs his own amateur Heartaches Cricket Club, the name inspired by an Elvis Presley song.[28]

According to The Sunday Times Rich List of British millionaires from the world of music, Rice is worth £149 million as of 2013.[29]

In addition to adaptations of his theatrical productions, Rice has worked on several original film and television projects: