Samuel "Sam" Wanamaker, CBE (born Samuel Watenmaker; June 14, 1919 – December 18, 1993) was an American actor and director who moved to the UK after being put on the Hollywood blacklist in the early 1950s. He is credited as the person most responsible for the modern recreation of Shakespeare's Globe Theatre in London, where he is commemorated in the name of the Sam Wanamaker Playhouse, the site's second theatre.

Wanamaker was born in Chicago, Illinois, the son of tailor Maurice Wattenmacker (Manus Watmakher)[1] and Molly (née Bobele). His parents were Ukrainian Jews from Nikolayev. He was the younger of two brothers, the elder being William, long-term cardiologist at Cedars-Sinai Medical Center. Wanamaker trained at the Goodman Theatre in Chicago and began working with summer stock theatre companies in Chicago and northern Wisconsin, where he helped build the stage of the Peninsula Players Theatre in 1937.

Wanamaker began his acting career in traveling shows and later worked on Broadway. In 1957, he was appointed director of the New Shakespeare Theatre, in Liverpool. In 1959, he joined the Shakespeare Memorial Theatre company at Stratford-upon-Avon, playing Iago to Paul Robeson's Othello in Tony Richardson's production that year.[2] In the 1960s and 1970s, he produced or directed several works at venues including the Royal Opera House, Covent Garden, and directed the Shakespeare Birthday Celebrations in 1974. 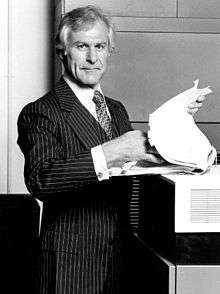 as Stanley Goldblum in The Billion Dollar Bubble (1976)

He worked both as a director and actor in both films and television, and his appearances included such movies as The Spiral Staircase (1974), Private Benjamin (1980), Superman IV: The Quest for Peace (1987), and Baby Boom (1987). He also directed stage productions, including the world premiere production of Michael Tippett's opera The Ice Break.[3] In 1980, he directed Giuseppe Verdi's opera "Aida" starring Luciano Pavarotti at San Francisco Opera (now broadcast version released as DVD). He was also featured as the widowed and very ruthless department store owner Simon Berrenger on the short-lived drama Berrenger's in 1985. 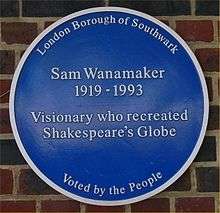 Blue plaque to Wanamaker outside the Shakespeare's Globe Theatre

Wanamaker founded the Shakespeare Globe Trust to rebuild the Globe Theatre in London, and played a central role in realizing the project, eventually raising well over ten million dollars. According to the New York Times, it became Wanamaker's "Great Obsession" to realise an exact replica of William Shakespeare's Globe Theatre, eventually securing the financial support of philanthropist and fellow lover of Shakespeare, Samuel H. Scripps. Though, as in the late 16th and 17th centuries, the 20th century Royal family were more or less supportive, British officialdom was far less so: English Heritage, which controlled the site of the real Globe nearby, refused to allow the archaeology Wanamaker requested in order to ascertain its precise dimensions.[4][5]

According to Karl Meyer of The New York Times:

"The Shakespeare project helped Mr. Wanamaker keep his sanity and dignity intact. On his first visit to London in 1949, he had sought traces of the original theatre and was astonished to find only a blackened plaque on an unused brewery. He found this neglect inexplicable, and in 1970 launched the Shakespeare Globe Trust, later obtaining the building site and necessary permissions despite a hostile local council. He siphoned his earnings as actor and director into the project, undismayed by the scepticism of his British colleagues."[4] 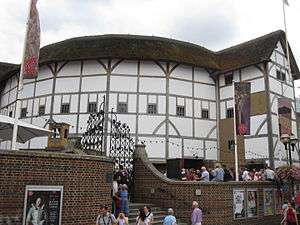 On the south bank of the River Thames in London, near where the modern recreation of Shakespeare's Globe stands today, is a plaque that reads: "In Thanksgiving for Sam Wanamaker, Actor, Director, Producer, 1919–1993, whose vision rebuilt Shakespeare's Globe Theatre on Bankside in this parish".[4] There is a blue plaque on the river-side wall of the theatre,[6] and the site's Jacobean indoor theatre, opened in January 2014, is named the Sam Wanamaker Playhouse after him.[7]

For his work in reconstructing the Globe Theatre, Wanamaker, in July 1993, was made an honorary Commander of the Order of the British Empire (CBE). He was also honoured with the Benjamin Franklin Medal by the Royal Society of Arts in recognition of his contribution to theatre.

Also in tribute to Wanamaker's contribution, when multi-Tony Award-winning British actor Mark Rylance accepted his third Tony on stage in New York City during the televised ceremonies on June 8, 2014, he did so with a substantial note of thanks to this American savior of the Globe.

In 1943, Wanamaker was part of the cast of the play Counterattack at the National Theatre, Washington, D.C.. During the play, he became enamored of the ideals of Communism and joined the American Communist Party. He attended Drake University prior to serving in the U.S. Army between 1943 and 1946 during the Second World War. In 1947, he returned to civilian life and, before moving to Hollywood, quit the Communist Party.

In 1951, Wanamaker made a speech welcoming the return of two of the Hollywood Ten. In 1952, at the height of the McCarthy "Red Scare" period, despite his distinguished service in the Army during World War II, Wanamaker learned that he had become blacklisted while he was filming Mr. Denning Drives North in the UK. Wanamaker consequently decided not to return to the United States. Instead, he reestablished his career in Britain, as actor on stage and screen, director and producer.

The BBC documentary Who Do You Think You Are? broadcast on 24 February 2009, which featured Wanamaker's daughter Zoë, revealed that the FBI had kept a substantial investigation file for him, including incriminating witness statements, and that the House Un-American Activities Committee had intended to subpoena him as a witness. His activities were also reportedly monitored by MI5.[8]

Wanamaker died of prostate cancer in London in 1993 at the age of 74,[9] before his dream could be finalized, and prior to the grand opening of the Globe by Queen Elizabeth II on 12 June 1997.[10] He was survived by three daughters, Abby, Jessica and Zoë.