To Anacreon in Heaven

"The Anacreontic Song", also known by its incipit "To Anacreon in Heaven", was the official song of the Anacreontic Society, an 18th-century gentlemen's club of amateur musicians in London. The tune was later used by several writers as a setting for their patriotic lyrics. These included two songs by Francis Scott Key, most famously his poem "Defence of Fort McHenry". The latter combination became known as "The Star-Spangled Banner" and was adopted as the national anthem of the United States of America in 1931. 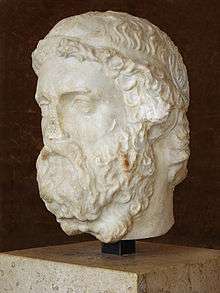 A bust of Anacreon

The Anacreontic Society was a gentlemen's club of the kind that was popular in London in the late eighteenth century. In existence from approximately 1766 to 1792, the Society was dedicated to the ancient Greek poet Anacreon, who was renowned for his drinking songs and odes to love. Its members, who consisted mainly of wealthy men of high social rank, would meet on Wednesday evenings to combine musical appreciation with eating and drinking. 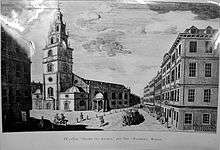 The Crown and Anchor tavern, where the Society met from the late 1770s, is visible on the right. The Church on the left is St Clement Danes.

According to an anonymous "History of the Anacreontic Society" published in 1780, the Society was founded "about the year 1766" by one Jack Smith.[1] The Society initially met in various taverns, and then moved to the London Coffee House on Ludgate Hill. It subsequently relocated to the Crown and Anchor tavern in The Strand in order to accommodate an expansion in its membership from 25 to 40.[1] Its membership later increased to 80.

A musical high-point of the society occurred in January 1791, when Josef Haydn attended a meeting at which the twelve-year-old Johann Hummel performed, "astonish[ing] the company with a most admirable performance of a favourite English ballet, with variations, on the harpsichord".[2]

The Society came to an end after the Duchess of Devonshire attended one of its meetings. Because "some of the comic songs [were not] exactly calculated for the entertainment of ladies, the singers were restrained; which displeasing many of the members, they resigned one after another; and a general meeting being called, the society was dissolved."[3] It is not clear exactly when this incident occurred, but in October 1792 it was reported that "The Anacreontick Society meets no more; it has long been struggling with symptoms of internal decay".[4]

The Society met twelve times a year, starting in late November, and continuing every other Wednesday evening.[1] Each meeting began at half past seven with a lengthy concert, featuring "the best performers in London" (who were made honorary members of the Society). Following the concert, the members adjourned to another room for a meal, after which the members would participate in "catches and glees", "songs", "miniature puppet-shews", and "everything that mirth can suggest".[1] The members, who paid a subscription fee of three guineas, were generally of "fashionable society" including "several noblemen and gentlemen of the first distinction".[5] Each member was entitled to admit one guest.

The original role of the Song

An early reference to the Anacreontic Song is found in the long-unpublished journals of gentleman-composer John Marsh (1752-1828). Writing of December 11, 1773, he recalls:

Mr Bowen... invited me to accompany him on the Saturday following to a concert at the London Coffee House called the Anacreontic Meeting, which I of course readily accepted of & played with Mr Smith the leader after wh'ch we sat down a pretty many of us to supper after which catches & glees were performed, in which a Mr Webster, a young man with a very fine bass voice much distinguish'd himself. The Anacreontic Song was also sung by him, in the last verse of which we stood hand in hand all around the table, this concert being in fact the origin of the Society held afterwards for many years at the Crown and Anchor.[6]

Another reference is found in the long-unpublished "Recollections" of Richard John Samuel Stevens (1757-1837). In this passage, Stevens is speaking of the year 1777:

The Evenings entertainment began at seven O Clock, with a Concert, chiefly of instrumental Music; it was not very uncommon to have some Vocal Music interspersed with the Instrumental. Mr. Sabattier was the Manager of this department, and generally stood behind the Person who was at the Piano Forte. At ten O Clock the Instrumental Concert ended, when we retired to the Supper rooms. After Supper, having sung "Non nobis Domine" we returned to the Concert Room, which in the mean time had been differently arranged. The President, then took his seat in the center of the elevated table, at the upper end of the room, supported on each side, by the various Vocal performers. After the Anacreontic Song had been sung, in the Chorus of the last verse of which, all the Members, Visitors, and Performers, joined, "hand in hand," we were entertained by the performance of various celebrated Catches, Glees, Songs, Duettos, and other Vocal, with some Rhetorical compositions, till twelve O Clock.[7]

After the concert an elegant supper was served up; and when the cloth was removed, the constitutional song, beginning, 'To Anacreon in Heaven,' was sung by the chairman or his deputy.[8]

The Anacreontic Song served as the "constitutional song" of the Society. After the initial concert and meal, the Song would be sung in order to open the after-supper, more light-hearted part of proceedings. The verses, which are difficult to sing because of their wide range, would be sung by a solo singer, with the entire Society joining in the refrain.[9] Although it is often described as a "drinking song", Lichtenwanger states that To Anacreon in Heaven "was not a barroom ballad, a drinking ditty to be chorused with glasses swung in rhythm", but "convivial, ... in a special and stately way".[9]

Early publications of the song ascribe its lyrics to the Society's president, Ralph Tomlinson. Tomlinson was baptized in Plemstall, Cheshire, in 1744; by 1766 he was a lawyer working in London. Tomlinson likely became president of the Society following the death of the previous president, George Bellas, in January 1776.[10] He died in March 1778 at the age of thirty-three.[11] 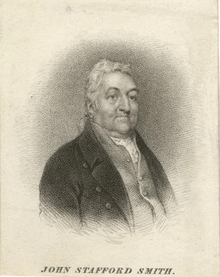 Portrait of John Stafford Smith, around 1820

While many early publications of the Song attribute the words to Tomlinson, none name the creator of the music. The identity of the composer was a subject of controversy until the discovery, in the mid-twentieth century, of a passage in a then-unpublished manuscript of Recollections written by Richard John Samuel Stevens (1757-1837), a member of the Anacreontic Society. Writing of the year 1777, Stevens recalled:

As I have mentioned the Anacreontic Society, it may not be improper to give some account of that Popular meeting. It was first held at the London Coffee House, on Ludgate Hill, but the room being found too small, it was removed to the Crown and Anchor Tavern in the Strand, then kept by one Holloway. The President was Ralph Tomlinson Esqre, very much of a Gentleman, and a sensible, sedate, quiet man: I believe that he was a Solicitor in Chancery. He wrote the Poetry of the Anacreontic Song; which Stafford Smith set to Music: this Song was sung by Webster, when I first attended the Society.[7]

Beginning of the Canon "O Remember" by John Stafford Smith. It "gain'd a Prize Medal" from the London Catch Club in 1773.[12]

In this passage, Stevens identified the composer as John Stafford Smith (1750-1836). Smith, the son of the organist of Gloucester Cathedral, was sent at a young age to sing in the Chapel Royal, and thereafter soon established himself in the capital. Like Stevens himself, Smith was a young professional musician active primarily in the chapels and churches of London. Smith was a published composer by 1772, subsequently winning two composition prizes from the London Catch Club in 1773.[13] Both Smith and Stevens were likely among the "honorary members" of the Anacreontic Society who played in its concerts without having to pay the subscription fee;[14] Smith is probably the "leader" identified by Marsh in his recollection of 1773 excerpted above.

Smith outlived both Ralph Tomlinson and the Anacreontic Society by several decades before dying in 1836. During his lifetime, the melody of the Song was set to other texts (most notably the Defence of Fort McHenry as discussed below) and became extremely popular. Despite this, Smith does not seem to have been eager to publicize the fact that he had composed the Song. The best evidence we have for a claim of authorship occurs in his Fifth Book of Canzonets (1799),[15] which included an arrangement of the Anacreontic Song with the ambiguous notation "harmonized by the Author".[16][17]

It remains puzzling why Smith did not make more effort to associate himself with the Song. Until the discovery of Stevens's Recollections, there was some controversy over whether Smith was in fact the composer.[18][19] However, no alternative story for the music's origins (whether as the work of a different composer or as a pre-existing tune) ever gained a consensus among historians. Lichtenwanger suggests that "[p]erhaps Smith composed the song for Tomlinson for money, for a flat fee, which meant yielding his legal rights in it to Tomlinson or the Society".[14]

The date of the composition of the Song is uncertain. It cannot predate the foundation of the Anacreontic Society (around 1766). Lichtenwanger suggests a composition date as late as 1776;[20] but if the Marsh journal is accurate then the Song must have existed by December 1773.[21] The age of John Stafford Smith may also be of interest; Smith was in his mid-teens in 1766, while by 1773 he was in his early twenties and a published, prize-winning composer. 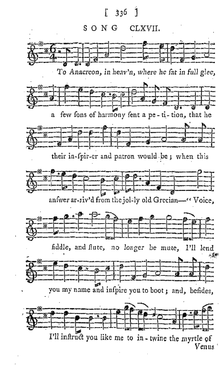 Particular interest attaches to the first Longman & Broderip edition of the music, published between 1777 and 1781.[24][28] This was likely the first publication of the music and the official edition from which others were copied. Broderip, a partner at the firm, is known to have attended meetings of the Society.[29]

The lyrics are "a good-natured takeoff on a bit of pseudoclassical mythology".[9] The following is taken from the first Longman and Broderip edition:[30] 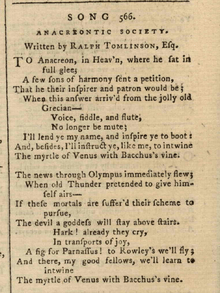 First known publication of the lyrics of "The Anacreontic Song", from "The Vocal magazine", 1778. The reference to "Rowley's" was removed in later versions.

The earlier version of the lyrics

In the first known version of the lyrics, as published in The Vocal magazine of 1778, there are two significant textual discrepancies from later publications.

The two replaced lines refer to the Society's earlier meeting-place at the London Coffee-House, which was situated on Ludgate Hill and seems to have occupied the same premises as Rowley and Leech, a wine merchant.[34]

Melody of The Anacreontic Song, from the first Longman & Broderip edition

The song, through its bawdy lyrics, gained popularity in London and elsewhere beyond the Anacreontic Society. New lyrics were also fashioned for it, including several patriotic titles in the United States. The most popular of these at the time was Robert Treat Paine Jr.'s "Adams and Liberty"[35] (1798).

Francis Scott Key wrote "Defence of Fort McHenry" during the War of 1812, while detained on a British ship during the night of September 13, 1814, as the British forces bombarded the American fort. Key specifically wrote the lyrics with this familiar patriotic tune in mind, just as he had done with an earlier set of his lyrics, "When the Warrior Returns", in which he had made similar use of "star-spangled banner" imagery.[36] Later retitled "The Star-Spangled Banner", Key's lyrics, set to Stafford Smith's music, became a well-known and recognized patriotic song throughout the United States, and was officially designated as the U.S. national anthem on March 3, 1931.[37] The setting of new lyrics to an existing tune is called a contrafactum.[38]