Thomas Michael Zbikowski (born May 22, 1985) is a former American football safety. He is also a professional boxer. He was drafted by the Baltimore Ravens in the third round (86th overall) of the 2008 NFL Draft. He earned All-American honors playing college football for the University of Notre Dame from 2003 to 2007.

Zbikowski also played for the Indianapolis Colts and Chicago Bears.

Zbikowski is currently a firefighter on the Chicago Fire Department.

Thomas Michael Zbikowski was born on May 22, 1985, in Park Ridge, Illinois, the youngest of four children born to Edmund Richard Zbikowski and Susan Lois (née Schatz) Zbikowski. His siblings are Kristen Zbikowski, Edmund Joseph "E.J." Zbikowski, and Stephen Zbikowski, who died in infancy in 1980. He is of Polish descent on his father's side of the family and of German descent on his mother's side of the family. Tom credits his childhood friend Tyler Cowman with getting him into football. He grew up in Arlington Heights, Illinois. He attended Greenbrier Elementary School and Thomas Middle School in Arlington Heights, Illinois and then high school at Buffalo Grove High School in Buffalo Grove, Illinois. He graduated from Buffalo Grove in 2003. He played youth football with the Buffalo Grove Bills and the Bensenville Bandits during elementary and middle school. At Buffalo Grove High School, he played quarterback where he set the school records in scoring (202 total points), and rushing (2357 yards, 7.4 average, 32 tds) before becoming a defensive back as well.

Zbikowski played college football at Notre Dame. He made his debut as a sophomore in 2004, appearing in all 12 games and finished fourth best on the team with 70 total tackles (37 solo, 33 assisted) and two forced fumbles. He was named Walter Camp Defensive Player of the Week on Sept. 19 following his performance at Michigan State as he had a team-high nine tackles, forced a fumble and returned it for a 75-yard TD and recorded his first career interception.

Zbikowski broke out as one of college football's best utility players during his junior season, excelling as a safety and a return man. Zbikowski accounted for four TDs (two interception returns and two punt returns) in 12 games played. He finished fourth on the team with 71 total tackles and led the defense with five interceptions while leading the Irish to the Fiesta Bowl. Following the seasons, Zbikowski earned Third-Team Associated Press All-America honors.

He served as 2006 team captain alongside Brady Quinn and Travis Thomas and was selected to the second-team All-American squad by the Walter Camp Football Foundation after helping the Irish earn a bid in the Sugar Bowl. Zbikowski was also named a third-team All-American by the Associated Press and was a semi-finalist for the Jim Thorpe Award, presented annually to the nation's best defensive back. He ended the year with 79 tackles, recovered a fumble for a touchdown against Penn State, and recorded his third career punt return touchdown with 52-yard return against North Carolina.

Zbikowski returned to Notre Dame for his fifth year in 2007, recording a career high 80 total tackles with a pair of interceptions and fumble recoveries. He continued to shine as a return man, racking up 234 return yards on punts. He graduated in May with degrees in sociology and computer applications.

Zbikowski was selected with the 86th overall pick in the 2008 NFL Draft by the Baltimore Ravens. He made his professional debut on September 7 against the Cincinnati Bengals, posting his first career tackle on special teams during a 17-10 win. He had two interceptions in 2009, and helped as a returner. 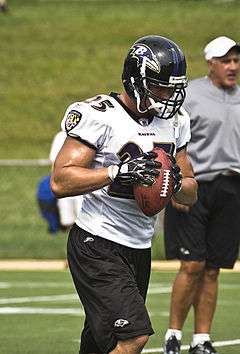 Zbikowski practicing with the Ravens in 2008.

Zbikowski signed with the Indianapolis Colts on March 16, 2012. He was released from the team on March 15, 2013 after recording a sack and an interception, which he returned 20 yards.

On September 10, 2013, Zbikowski was suspended by the National Football League for four games for violating the league's performance-enhancing drug policy.[3] He later revealed the banned substance was a diuretic he took to lose weight gained from drinking, a nightly habit before each game that had begun to affect his on-field performance.[4]

It was announced in 2013 that Zbikowski retired from the NFL. He explained, "Football got old to me…I enjoyed my first two years in the NFL because it was a challenge. I was playing with the best. But after awhile you don’t care whether you win or lose because you’re still getting a paycheck. I enjoyed high school and college much more." He is currently a firefighter for the Chicago Fire Department.

On June 10, 2006, Zbikowski made his professional boxing debut at Madison Square Garden in New York City, beating his opponent, Robert Bell of Akron, Ohio, by TKO within 49.0 seconds of the first round. The fight was compliant with NCAA guidelines. Bell, who is an Ohio State fan, wore an Ohio State football jersey into the ring.

Zbikowski boxed a three-round exhibition fight against Ryan St. Germain on March 2, 2007 at the Century Center in South Bend, Indiana. After the 2008 NFL season he decided to put his boxing career on hold to focus on football.

On March 12, 2011, Zbikowski returned to the ring for the first time since 2007, taking on 1-2 35-year-old Richard Bryant in Las Vegas, amidst ongoing NFL labor contract discord.[5] Zbikowski won by TKO after 1 minute 45 seconds in the first round of the scheduled four-round fight.[6]

After that, he trained under the instruction of his new trainer Emanuel Steward,[7] an inductee both of the International Boxing Hall of Fame and the World Boxing Hall of Fame, and won via a unanimous decision at the Boardwalk Hall in Atlantic City, New Jersey on March 26, 2011 to extend his winning streak to three in a row.[8][9]

He extended his win streak to 4-0 in a first-round knock out against Blake Warner at the Winstar Casino in Thackerville, Okla. on April 23, 2011.[10] After testing positive for a substance in marijuana, he was suspended. After taking a second test, his suspension was lifted. Bob Arum said, "I think that the commission did the right thing by lifting the suspension... The tests that were taken were very unreliable. Now Tommy has taken a proper test, and as a result, you know that he's clean. So they did the right thing." [11]