Tomy Company, Ltd. (株式会社タカラトミー, Kabushikigaisha takaratomī, Takara Tomy) is a Japanese entertainment company that makes children's toys and merchandise. It was created from a merger on 1 March 2006 of two companies: Tomy (founded in 1924 as Tomiyama, changing the name to Tomy in 1963[3]) and long-time rival Takara (founded in 1955).[3] The company has its headquarters in Katsushika, Tokyo.

The company made a pragmatic decision of which name to use after the merger, deciding to use "Tomy" in international subsidiaries and "Takara-Tomy" in Japan. They came to this decision because;[4]

Therefore, it seemed appropriate to keep a domestic English name which matched that of international subsidiaries.

One of the editorial policies of many Western business publications is to ignore merger declarations and instead, declare one company as being bought by another. Therefore, in much of the Western media, the Takara-Tomy merger was characterised as a 'take-over' of Takara by Tomy. This assumption may have been made because of multiple reasons. Firstly, several years of losses had put Takara in a financially weakened state at the time of the merger although, Takara did have significantly higher sales than Tomy. Secondly, the management of Takara and Tomy had discussed merging several times, including instances where Takara appeared stronger. Therefore, in the final decisions, legally under Japanese corporate law, both companies agreed to merge on an equal basis.

There has been much post-merger media speculation on the control of brands from the Takara-Tomy merger. Much of this has arose from the new use of a "TOMY" copyright on all packaging, including former Takara brands shipped by Hasbro. However, this is simply the result of a practical decision to use only the Tomy name in International subsidiaries. In Japan, Takara-Tomy continues to use the former Tomy and Takara names as distinct brand names on toy ranges which originated in each separate company. Most new toy ranges or stand-alone products now carry the new Takara-Tomy brand.

Takara purchased a majority stake in Tatsunoko Production in June 2005. The studio then became a complete subsidiary of Takara Tomy, following the March 2006 merger.[5] Tomy UK was founded in 1982 for sale and distribution of Tomy products in Europe, and has brought toys such as Zoids and a variety of games like Pop-up Pirate to the West with great success. Tomy UK's slogan has traditionally been "Trust Tomy". In 2006, Tomy UK launched a website where consumers can buy directly from Tomy's catalogue online.[6] In early 2011, Takara Tomy acquired RC2 Corporation and RC2 sub-brand, Learning Curve, which included The First Years, Lamaze, and Compass.

The Tomy Pocket Game Shooting Gallery was manufactured in 1978.[7] 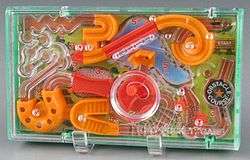 The Tomy Pocket Game Obstacle Course was manufactured in 1979.[7]

Takara-Tomy has manufactured a broad range of products based on its own properties which include, from the Tomy side: Tomica, Plarail, Zoids, Idaten Jump, Nohohon Zoku and Tomy branded baby care products, and, from the Takara side: Space Pets, Choro-Q (aka Penny Racers), Transformers, B-Daman, Koeda-chan (aka Treena) and Microman. The merged Takara-Tomy also produces and/or sells a wide variety of toy and game brands under license, such as Thomas & Friends, Disney, Pokémon, Naruto, The Game of Life (aka Jinsei Game), Rockman (aka Megaman), Mermaid Melody Pichi Pichi Pitch, Kirarin Revolution, Sugar Bunnies and Animal Crossing. Tomy's rights to these licenses vary by region. One of the first examples of product synergy for the merged company was the combining of Takara's Jinsei Game (Game of Life) license and Tomy's Pokémon license to produce a Pokémon Jinsei Game.

Tomy sells many products worldwide, including baby and pre-school toys, baby monitors, mechanical and electronic games, consumer electronics, children's arts and crafts products, and a vast range of toys suited to girls or boys. They make a large selection of Disney, Pokémon and Thomas the Tank Engine merchandise. They also publish videogames in Japan (mostly based on Zoids and Naruto anime series), and are responsible for the distribution of some Hasbro products in Japan, such as Play-Doh, Jenga and Monopoly. The company was formerly responsible for distribution of the My Little Pony products in Japan before Bushiroad acquired the distribution rights to them starting with the franchise's Friendship Is Magic line (though the animated television series was owned by Hasbro). Later in 2015, after Bushiroad disowned the distribution rights, Sega Toys reacquired the rights to all generations of the franchise.

They merged with Takara shortly before the bankruptcy of the mentioned company.

The Tomy Blip was a mechanical Pong handheld released in the '70s. 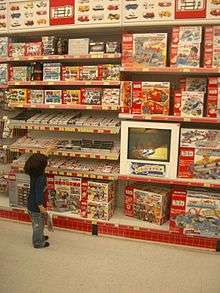